As we already know, we use adjectives to describe someone or something.

There are positive and negative adjectives, some of them are comparable, others are not, but the fact is that there are so many adjectives in the English language that it will be hard to learn all of them.

However, in this article we are going to tell you something about the adjectives that start with the letter B.

We are going to tell you what the most common adjectives starting with B can mean.

Also, we are going to give you a lot of examples, in order to understand better the use of those adjectives.

The Most Common Adjectives That Start With the Letter B

One of the most common adjectives that start with the letter B is bad. All of us use this adjective a couple of times every day.

There are many uses and also many different meanings related to adjective bad.

First of all, we have to say that this adjective is used to describe something that has a poor quality.

In this context adjective bad has a couple of synonyms, such as: poor, second-class, inferior or substandard.

We can see the use of adjective bad in the following example: ‘’Do not buy from this store because the quality of the goods is very bad’’.

Another example could be: “Although he is a great actor, his last movie is very bad”, which means that the quality of the movie is not good.

It is possible that the acting in the film was not good or that there were some problems with the set design, for example.

Anyway, the quality of the film is poor and that is why it is said that the movie is bad.

Sometimes adjective bad can refer to people who are evil and who don’t have good intentions towards you.

Take a look at the example below:

There is one more use of adjective bad. It can describe a person who doesn’t have skills for doing something.

This person is not good in doing something and because of that we can use adjective bad.

For example: “He has a car, but he is a bad driver”, which means that he is not good at driving.

Also, adjective bad can be used to describe something that is unpleasant and that is not desired.

We have a following example that describes the use of this adjective:

“He has received bad news recently”, which means that the news he received was unpleasant and unfortunate.

There is one more example in which you can see that adjective bad means that something is undesirable or unpleasant:

“We didn’t go on the trip because of the bad weather yesterday”, which means that weather conditions were unfavourable and because of that we cancelled our trip.

Adjective bad can also mean that something can cause problems to someone.

“His father had a bad accident last night”, which means that the accident was so serious that it could even cause fatal consequences.

Also, if you don’t eat properly, it can be said that your diet is bad. In this case adjective bad indicates that something can harm you and cause many health problems to you.

A good example could be also the next sentence: “It is not good to exercise a lot if you have a bad leg/heart/back.”

However, there are also other contexts in which we can use adjective bad. Adjective bad can also mean that something can have negative effects on someone’s success.

Another use of adjective bad is to describe something that is not convenient or appropriate. For example, we can say:

“I made a bad choice last time. I wish I have listened to you.” It means that my choice was not appropriate.

“Don’t listen to him. His advice is bad.” It means that his advice was not good and it was not convenient for you.

As you can see, there are so many different contexts in which you can use adjective bad.

It is certainly one of the most common adjectives with the letter B at the beginning.

We have already mentioned a couple of synonyms related to adjective bad, but there are also many other synonyms of this adjective, such as: unpleasant, awful, unacceptable, inadequate, unfavourable, disagreeable and many others.

Adjective balanced is one of positive adjectives that start with B.

This adjective is used to describe something that is in the state of balance, which means that the parts of something are proportioned or properly arranged.

Look at the following example: “To be happy the most important thing is to live in peace and to have a balanced life.”

“If you want to lose weight, your diet has to be balanced and healthy.”

This sentence is a great example in which you can see the use of adjective balanced.

We can also say: “We have to save to buy a house, so we will have a balanced budget in the coming months”, which means that we will not spend too much money, but we will spend it moderately.

We can also describe a person using adjective balanced. We can say that someone is well-balanced if that person doesn’t have emotional problems and if he/she is sensible.

A well-balanced person is rational and keeps his/her life completely under control.

Adjective beneficial is also one of the adjectives beginning with B. This adjective is the synonym of advantageous and favourable.

If something is beneficial, it means that it has positive effects on something. It can improve a certain situation or condition. For example, we can say:

“This plant is beneficial for your stomach”, which means that this plant has positive effects on your stomach.

There is also an example: “That conversation was beneficial for both of us”, which means that it helped us both understand some things and make some important decisions for the future.

In this sentence adjective beneficial means that the conversation was useful for us.

Another adjective that starts with the letter B is boring. This adjective is used to describe something that is not interesting.

“I am going to find another job because my current job is pretty boring.”

Adjective boring in this case means that my job is not interesting and that’s why I want to find another more interesting job.

“I can’t be in a relationship with him because he is a very boring guy.”

This sentence is another example in which you can see adjective boring that is used with the meaning “not interesting”.

The most common synonyms of adjective boring are: monotonous, repetitive, dull, etc.

We can also say that adjective breathtaking is one of the compliments that start with B.

This adjective has always a positive meaning and if we want to give someone a nice compliment, we can tell him that he/she is breathtaking.

If someone looks breathtaking, it means that this person looks so good that it takes your breath away with his/her beauty. According to that we will give you the following example:

“You look breathtaking in that dress”, which means that you look very good.

Also, adjective breathtaking can be used to describe things and situations that are exciting and thrilling.

Adjective brave is also one of descriptive words that start with B. It means that someone has courage to do something.

Actually, adjective brave is used to describe a person who doesn’t have fear.

In the following sentences you can see how to use adjective brave properly:

“He has been to war many times because he is very brave.”

“He was declared a national hero because he had a brave heart and he fought until his last breath.”

Also, it is important to say that adjective brave is comparable, so we have its comparative – braver and its superlative – bravest.

According to that, we can say: “He is much braver than his brother”, which means that his brother is not as brave as he is.

Adjective brainy is also one of the words that start with B to describe someone.

If someone is brainy, it means that this person is very clever and intelligent.

However, adjective brainy is not always related to persons, but it can be also used to describe something.

We will give you a couple of examples in order to understand better the use of adjective brainy:

“They had a very brainy conversation”, which means that their conversation was on an intelligent level.

“Your idea is brainy and we should listen to you”. It means that your idea is very good.

We should listen to you because you suggested something smart and reasonable.

The most common synonyms of adjective brainy are: intelligent, bright, clever, intellectual, gifted and many others. 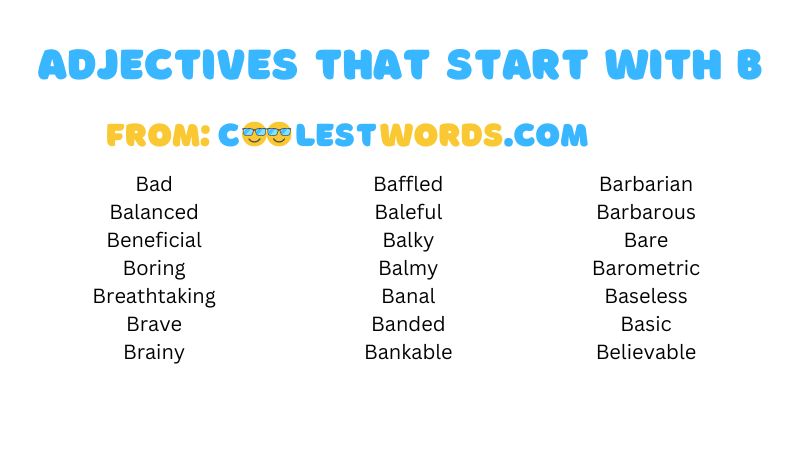 Other Adjectives Starting With B

We hope that this article helped you understand better what the adjectives starting with B can mean and how to use them in the right way in sentences.