Adjectives That Start With C

As you probably know, adjectives are a type of words that describe to us what something or someone is like.

Adjectives always stand next to a noun and define it more closely.

There are a lot of adjectives in the English language, but this article will be dedicated to the adjectives starting with C.

There are a lot of adjectives in the English language that start with this letter, and we will base ourselves on some of them and explain to you what they mean.

We will tell you how certain adjectives that begin with the letter C are used in the English language, so that it will be easier for you to understand their meanings.

We will also give you many examples, so you will be able to see in which contexts and in what way the adjectives that we will mention are used.

The Most Common Adjectives That Start With the Letter C

One of descriptive words that start with C to describe someone is cute.

It is an adjective that we use very often in our everyday speech.

Actually, the adjective cute describes someone or something that is sweet, appealing and lovely.

You can take a look at the next examples in order to understand the use of the adjective cute.

“Your daughter is very cute.”

“You have a very cute baby.”

“Where did you buy her this little suitcase? It is so cute.”

“Her outfit is very cute.”

We have also to mention that the adjective cute can describe someone who is looking good and who is attractive in a sexual way.

“He is very cute, but I already have a boyfriend.”

Another adjective that starts with C and that we use every day is the adjective clean.

This adjective means that something is not dirty. There are no marks and no dirt on something.

We will give you the following example: “She cleans the house regularly and everything is always clean.”

“He puts on his clean shirt and he goes to work.”

“I always keep my house clean.”

However, the adjective clean can also mean that something is innocent and pure.

“His emotions are clean”, which means that they are pure and sincere.

If something is charming, it means that it is very pleasant and delightful. A charming person refers to an attractive person.

Actually, the adjective charming is one of the best compliments that start with C.

We are going to give you some examples that can help you to understand the meaning of the adjective charming:

“She is a charming person and everyone loves her.” It means that she is very attractive and because of that people simply love her.

“I was in Paris last year and that city is really charming”, which means that it is really enchanting and beautiful.

For this reason, Paris attracts many tourists every year.

“Their house is big and charming.” In this sentence the adjective charming is used to describe something that is beautiful and appealing to other people.

Another adjective starting with C that is commonly used in everyday speech is the adjective crazy.

This adjective means that someone or something is deranged in a mental way. It can also mean that someone is insane or demented.

“You should not listen to him, because he is crazy.”

Sometimes the adjective crazy doesn’t have to mean that someone is insane, but it can only mean that this person is unpredictable.

“Since he broke up with her he’s gone completely crazy.” It means that we can no longer rely on him because his actions are unpredictable and insane.

Also, the adjective crazy can be used to describe something that is bizarre or unusual.

Look at the following example in order to understand better this use of the adjective crazy:

The adjective crazy can also mean that someone likes or is in love with somebody, which you can see in the examples below:

“He is crazy about her.” or “She drives me completely crazy.” In both examples the adjective crazy means that he likes her very much.

One of descriptive words that start with C is calm. It is another adjective that is commonly used in the English language.

Before we tell you what the adjective calm can mean, you have to know that there are also the noun calm and the verb calm.

All three types of words have the same form in this case – calm.

Because of that it is important to distinguish them in the sentence. We are going to give you a couple of examples that may help you in that:

Calm as a Noun: “There was the calm all over the city that day.”

Calm as a Verb: “You should calm her down before it is too late.”

Calm as an Adjective: “He was quite calm when he was told the bad news.”

You can see clearly now where is the difference in the meaning and use of the word calm.

In this article we are going to talk about the adjective calm more thoroughly. This adjective can be used both for persons and things.

The adjective calm is used to describe something or someone who is quiet, tranquil and still.

If someone or something is calm, it means that there are no rough motions, there is no excitement and no passion in doing something.

You will see a couple of examples in which we are going to use the adjective calm:

“He is calm by nature and he doesn’t get upset about unimportant things.” It means that he has strong nerves and manages to stay calm even in the most difficult situations.

His nature is such that he is not prone to annoyance, but always reacts calmly to all situations.

We hope that now the use of the adjective calm is much clearer to you and that you can distinguish this adjective from a noun and a verb that have the same form.

Also, the adjective calm is very common in the English language and it is used every day in various situations. Because of that it is important to use it properly in the sentence.

Some of the most common synonyms of the adjective calm are: quiet, still, tranquil, motionless, moderate, harmonious, cool, mild, smooth, etc.

One of the adjectives starting with C to describe a person positively is clever.

This adjective describes a person who is intelligent and who can understand things easily.

The adjective clever is used when someone is learning without difficulties and very quickly.

In this case the adjective clever means that someone is smart, talented and ingenious.

Look at the following examples in order to understand the use of this adjective:

“You don’t have to explain much to her, she is very clever.”

“He is a clever boy and it is always interesting to talk with him.”

We can also use the adjective clever to describe someone who is very skilful at something.

“She can help you fix it, because she is clever with her hands.”

Also, the adjective clever can refer to things and ideas of someone. For example, we can say:

“Your idea is clever.”

“It was a very clever decision.”

The next adjective that starts with C is childish. It is used to describe something related to childhood or to a child.

It can also mean that someone or something is not mature enough.

Sometimes we can use the adjective childish to describe someone’s behaviour that is a little stupid and silly.

You are going to see a couple of examples below:

“His childish way of thinking makes me crazy.”

“Lately your behaviour has been childish and it annoys me a lot.”

Sometimes the adjective childish can also refer to old persons who have become senile. Look at the example:

“His father is getting childish and he needs care.”

Catastrophic is also one of the adjectives beginning with C. It means that something causes destruction or harm.

“Mexico was hit by a catastrophic storm last year”, which means that there was a storm that caused a big damage to people.

There is also another use of the adjective catastrophic, for example: “It was a catastrophic defeat for the entire football team.”

The most common synonyms of the adjective catastrophic are: disastrous, tragic, fatal, cataclysmic, ruinous, etc.

The adjective casual means that something is informal and relaxed.

For example, we can say that someone is wearing a casual outfit, which means that this person always dresses informally.

If someone is wearing casual clothing, it means that this clothing is designed for informal use.

“It was a casual interview”, which means that this interview was very relaxed and also informal because it occurred by chance.

We can also say that something is done without any serious intention.

A common example would be: “They are not in a serious relationship, but they have casual sex only.”

The most important synonyms of the adjective casual are: nonchalant, occasional, informal, etc. 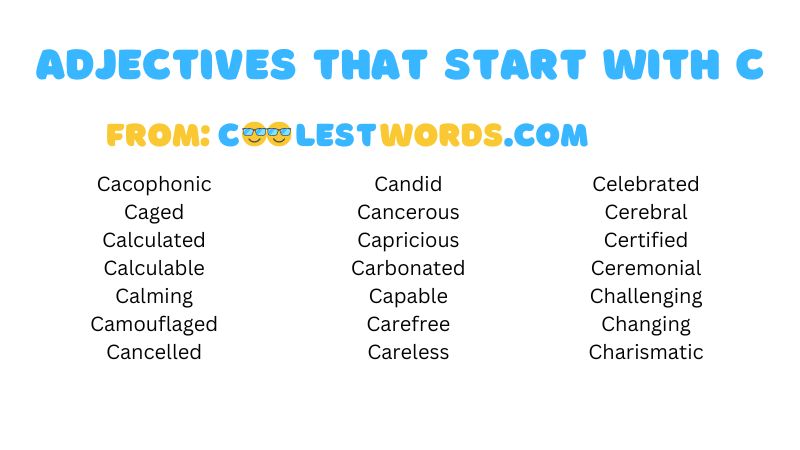 Other Adjectives Starting With C