In this article we will talk about the adjectives starting with the letter D.

There are so many adjectives that start with this letter.

However, we are going to talk about a couple of them only.

We will tell you what those adjectives mean and how you can use them in sentences.

We are going to explain you different contexts in which you can use those adjectives.

At the end of this article we will mention some more adjectives that start with the letter D.

You will see that there are a lot of adjectives that start with D, and we will try to mention some of the most common and most important ones.

The Most Common Adjectives That Start With the Letter D

Dangerous is a very common adjective that is used to describe someone or something that can cause an injury or harm.

We are going to give you a couple of examples:

“You should not be near that animal because it is very dangerous.” In this case the adjective dangerous is the synonym of wild and savage.

“You should be careful because you may be in a very dangerous situation right now”. In this sentence the adjective dangerous means “threatening” or “risky”.

Actually, we can say that you should be careful because you are in a risky and threatening situation right now.

We have also another example: “It is dangerous to walk the streets alone at night.” It means that it could be risky and unsafe for you.

As you can see, the adjective dangerous can be used for both persons and things. Sometimes this adjective is used to describe threatening situations as well.

We have one more example for you:

“There was a dangerous earthquake in their city”, which means that this earthquake could cause harm, damage and loss to all people in that city.

“He has been working as a policeman for several years and we can say that his job is very dangerous.”

It means that his job is full of risk and threatening situations. He has to be very careful because he constantly faces risky situations.

Apart from the adjectives threatening and risky, other synonyms of the adjective dangerous are: hazardous, unsafe, savage, vicious, menacing, wild and many others.

One of the words that start with D to describe someone is disloyal. The adjective disloyal refers to someone who is not faithful and trustworthy.

You will see a couple of examples that can explain you better how to use the adjective disloyal.

“A friend is not expected to betray us and to be disloyal to us”, which means that a friend should always be faithful and loyal to us.

Also, the adjective disloyal can describe someone who doesn’t love his country. In this context we can say: “He was always disloyal to his people and to his country.”

There is one more example in which we have used the adjective disloyal: “He was disloyal to his father and because of that he did not inherit anything from him.”

It means that his father did not leave him an inheritance because he was not faithful to him. He probably betrayed his father and he didn’t fulfil his expectations.

The synonyms of the adjective disloyal are: unfaithful, untrustworthy, faithless, untrue, unpatriotic, etc.

The next adjective that we are going to present you is the adjective disappointed that belongs to the group of negative adjectives.

The adjective disappointed means that someone is sad because someone else has betrayed him or failed to meet his expectations.

In other words, we can say that someone was not what you thought he was like. Because of that you may be feeling unhappy.

There is an example that may be helpful to you and show you how to use the adjective disappointed:

“I was very disappointed in him after he cheated on me.” It means that you trusted him very much but he deceived you and this way he disappointed you.

You are sad because you were betrayed by the person you love.

When it comes to the adjective disappointed, it does not always have to refer to persons, but sometimes it can also refer to events or situations that disappointed you.

“They were very disappointed when they lost the game”. It means that they were sad because they didn’t win. Their hopes were not realized and it was not as they expected.

The most common synonyms of the adjective disappointed are depressed, saddened, upset, disheartened, dispirited, etc.

One of the adjectives beginning with D is depressed. It is also one of negative adjectives in English language and it is used very often.

The most common synonyms of the adjective depressed are: sad, unhappy, melancholy, saddened and miserable.

When it comes to the meaning of the adjective depressed, it is important to know that it usually describes a person who is unhappy and maybe disappointed because of something or someone.

We are going to give you an example that will help you understand better how to use this adjective:

“After the divorce she became very depressed and she didn’t want to hang out with anyone.” It means that she was very sad after the divorce and she had no desire to go out.

However, there is also another use of the adjective depressed. This adjective can also refer to a place or to a certain economic situation.

Actually, it can be used to describe economic depression in a certain place.

For example we can say: “Due to the high unemployment rate, we can talk about the depressed economy that exists in this country.”

There is one more example in which the adjective depressed doesn’t refer to persons:

“Due to the small number of inhabitants and the danger that exists in the streets, that part of the city is very desolate and depressed.”

One of descriptive words that start with D is dirty. It is one of the most common adjectives in the English language.

The adjective dirty means that something is not clean, for example we can say:

“He has always dirty shoes”, which means that his shoes are never clean.

Also, in this context we can say: “His clothes are dirty”, which means that there is dirt on his clothes and they are not clean.

We can also say: “She doesn’t clean regularly and it is always dirty in her house.”

Sometimes the adjective dirty can be also used metaphorically, so we can say that someone’s job is dirty, which means that it is not legal.

In that context we can also say that someone’s money is dirty. It means that someone didn’t make money in a legal way.

It is interesting that the adjective dirty can sometimes refer to something vulgar or to something immoral. In this context we are going to give you some examples:

“He has dirty thoughts about her” or “I don’t like his dirty jokes and I always feel offended”.

In this vulgar context we can also say: “She looks dirty and guys don’t take her seriously.”

Sometimes we can use the adjective dirty to describe weather as well. If it is stormy outside or if it is too foggy, we can say that the weather is dirty in that situation.

There are also many other uses of the adjective dirty. For example, this adjective can be related to colours sometimes.

It can be used to determine a colour that is not bright or clear. In this case we can say that it is “dirty pink”, for example. You can see it in the next sentence:

“She bought a dirty pink sweater.”

One of the adjectives starting with D is dominant. If someone is dominant, it means that this person is more powerful than some other person.

For example we can say: “Among all the workers he is the dominant person in the company.” It means that he has more power and more authority than some other workers in the company.

We can also say “He is dominant over his employees”, which means that he has the power and his opinion is always most appreciated.

There is also another example with the adjective dominant: “Her husband is dominant in their marriage”. It means that he is the one who takes decisions and whose word has the most important meaning.

The adjective dominant does not always have to refer to persons, but sometimes it can also denote things or different circumstances. For example:

“He has a dominant position at work and he is very successful.” It means that his position is better than the position of his colleagues at work.

Some of the most important synonyms related to the adjective dominant are: authoritative, commanding, ruling, supreme, controlling, presiding, etc.

The adjective delicious is a positive adjective that starts with D and it is usually related to food. If something tastes good, we say that it is delicious.

For example: “The stew that he made is very delicious”, which means that its taste is very good and pleasant.

A similar example with the adjective delicious could be: “I would like to eat her delicious soup now.”

However, the adjective delicious can be a synonym of delightful and it can indicate that something give us great pleasure. In that context we can say:

“His sense of humour is very delicious”, which means that I like his humour and it gives me great pleasure.

The most common synonyms of the adjective delicious are: tasty, appetizing, flavourful, flavoursome, etc.

The adjective determined is one more adjective that starts with the letter D. This adjective describes someone who has firmly decided something and who doesn’t want to change the opinion.

Also, the adjective determined can describe someone who is generally purposeful and resolved. In this context we can give you an example:

“He is a very determined young man”. It means that he is responsible and that he is always ready to make all decisions himself. He knows exactly what he wants and he doesn’t change his mind. 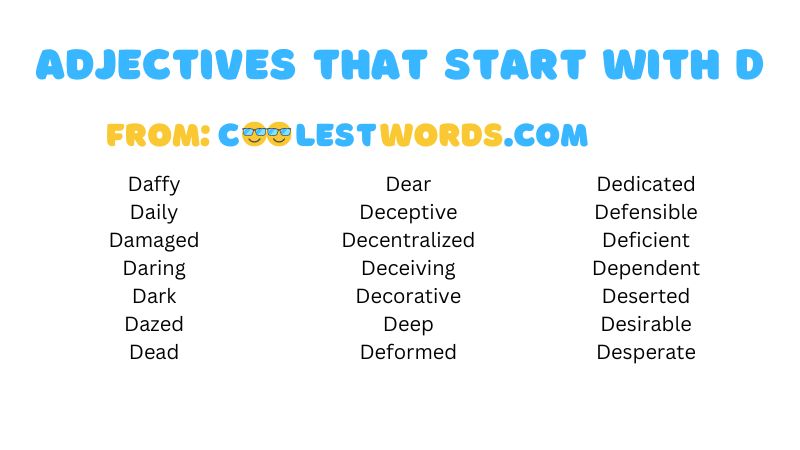 Other Adjectives Starting With D