Adjectives That Start With E

In this article we will talk about adjectives as descriptive words that stand next to a noun and describe it more closely.

Actually, the topic of today’s article will be the adjectives that start with the letter E.

We will tell you what are the most common adjectives that start with this letter and we will explain you their meanings, as well as their use in a sentence.

The Most Common Adjectives That Start With the Letter E

The adjective eager is one of the words that start with E to describe someone. This adjective means that someone wants something very much.

Someone is impatient to do something or to have something. Look at the next example to see the use of the adjective eager:

Grammatically speaking, we can say this sentence in another way as well: “He was eager for the news.”

Another example could be: “They were eager to play this game”, which means that they had a very strong desire to play the game.

Some of the most common synonyms of the adjective eager are: craving, wishful and desirous.

However, the adjective eager can also refer to someone’s face expression.

It means that he really wanted to hear what I had to say. He was very interested in listening to me and I saw that from his eager face.

One of descriptive words that start with E is also egocentric. It is one of the negative adjectives beginning with E that is used to describe persons.

The adjective egocentric means that someone thinks only of himself/herself. This person doesn’t have any feelings for other people.

We can also say that an egocentric person is a self-centered person that thinks only of her own feelings and desires.

An egocentric person is not at all interested in how others are feeling and what their needs and desires are.

We are going to give you now a couple of examples that can help you understand better the meaning and the use of the adjective egocentric:

“He is so egocentric that he always forgets other people’s birthdays and he gets angry if we forget his birthday.”

It means that he is so self-centered and he doesn’t care for other people and their feelings.

In this context we can say that the synonyms of the adjective educated are schooled, literate or tutored.

We will give you the examples that may be helpful to you:

“There are not many educated people in poor countries in Africa.”

“I would like to find a young and well educated guy.” It means that I want a guy who has graduated from a college or university and who has a lot of knowledge.

If someone is educated, it can also mean that someone is well informed. Look at the following example:

“You should be educated about the current situation if you want to get involved in it.”

In this sentence the adjective educated means “well-informed”, so we can say that you should be well-informed about the current situation…

One of the positive adjectives beginning with E is excellent. This adjective can refer to persons, but also to things. The adjective excellent means that something is very good or extremely good.

You will see in the next sentences how to use the adjective excellent:

“He got an excellent grade in mathematics.”

“She is an excellent writer and she has already published several of her stories.”

“He is an excellent actor and I enjoy watching him in movies.”

“The concert was excellent in every way.”

We hope that now you can understand how to use the adjective excellent.

Some of the synonyms of the adjective excellent are: outstanding, magnificent and exceptional.

One of the best compliments that start with E is elegant. This adjective is used to describe someone who looks graceful and who has a good style.

Actually, when someone’s appearance is stylish and sophisticated, we usually say that this person is elegant.

“She is very elegant in that dress.”

“Her style is so elegant that everyone always looks at her with admiration.”

“She is a very elegant young woman.”

You have seen in which contexts you can use the adjective elegant and we hope that you can understand its meaning.

Synonyms related to the adjective elegant are: stylish, tasteful, graceful, sophisticated, fashionable, modish, refined and many others.

Another adjective that is starting with the letter E is extroverted. This adjective describes a person who likes going out and who is very sociable.

Also, we can say that an extroverted person likes spending time with other people. This person is also confident and she is always surrounded with people.

“She is very extroverted and she has many friends.”

“He goes out every evening and he spends time with his friends. All people say that he is very extroverted.”

“She is very extroverted unlike her sister who does not like going out and spending time with other people.”

There are many synonyms of the adjective extroverted, such as: social, sociable, friendly, cordial and many others.

The adjective early is one of the most common adjectives in the English language.

First of all, you should know that the form “early” can be used both as an adverb and as an adjective.

In order to understand the difference between the adverb early and the adjective early we are going to give you some examples:

Early as an adverb: “He was tired and he came home early.”

Early as an adjective: “We can have an early lunch about 12 P.M.”

You have seen the difference between the adjective and the adverb early.

The adjective early usually means that something is done before it was expected.

Also, it can mean that something happened before the usual time.

“I’m not going to practice tonight, we will have an early dinner”, which means that we will have dinner earlier than we usually have it.

“He came in the early morning and woke us all up”, which means that he came earlier than usually.

However, sometimes the adjective early can mean that something happened at the beginning of a certain event or period, for example:

Some of the adjectives that have similar meaning as the adjective early are: premature, timely, untimely, prompt, speedy, prior, preliminary, primary, etc.

Easy is also one of the most common descriptive words that start with the letter E. This adjective means that something is uncomplicated and free of trouble.

If something is easy, we can also say that it is simple, passive, effortless or painless. Something that is easy requires no effort or challenge.

Below you are going to see a couple of interesting sentences that we have prepared for you. They will certainly help you understand better the use of the adjective easy.

“The exam was very easy and I will definitely pass it”, which means that I did not make any effort for that exam because it was not complicated.

Therefore, you will not have to struggle to distinguish German from other languages that belong to the same language group.

“The rules in this game are very easy, so that children can play this game, too.” This means that the rules of the game are not complicated at all and are simple to understand and learn.

They are so simple that even children can easily remember them.

The next adjective that starts with E and that we are going to talk about is the adjective easygoing.

This is one of the adjectives starting with E to describe a person positively. If someone is easygoing, it means that this person takes the life easy.

An easygoing person is also very relaxed and it is easy to get along well with such a person.

We can give you the following example to show you how the adjective easygoing works in a sentence:

“He is not afraid of his boss because his boss is easygoing.”

It means that he can easily agree with his boss and they always find a common solution. His boss is relaxed and not very strict.

We can also give you the sentence:

“He rarely gets annoyed and angry and he is mostly very easygoing. That’s why it’s nice to spend time with him.” This means that he is very relaxed and it is easy to get along with him.

The adjective that starts with E is also envious. This adjective is one of negative adjectives and it is used to describe a jealous person.

There are also similar examples:

“He is envious of his brother because he is more successful in business than him.”

“How can you recognize an envious person?”

The most common synonym of the adjective envious is “jealous”, but we can also say that someone is malicious or covetous. 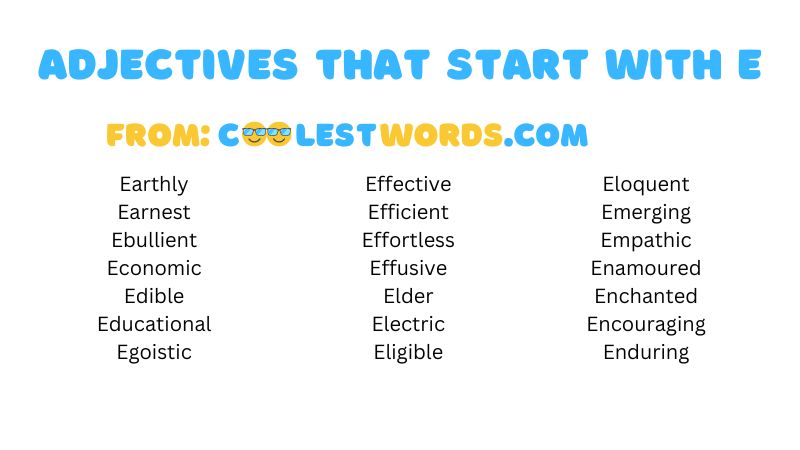 Other Adjectives Starting With E

Adjectives That Start With C