There are so many adverbs that start with the letter A.

In this article we are going to tell you what the most common adverbs that start with this letter are and we are going to give you a couple of examples for each of them.

Also, we are going to tell you what these adverbs mean and how you can use them in everyday speech.

The Most Common Adverbs that Start with the Letter A

Adverb abstractly means that something is done in an abstract way, which means that it was done in a way that is not realistic.

It is not based on real facts and persons.

Actually, we can say that something is done in a way that represents only general ideas of something.

For example, we have following sentences that can describe the use of adverb abstractly:

“My son is so young that he cannot think abstractly yet.” or “He described their love abstractly”.

Also, adverb abstractly is usually used when we talk about artistic world.

This adverb is used to express the ideas that an artist has about a certain thing or person.

The sentence “He was painting abstractly and all people admired his work” is a great example in which you can see the use of adverb abstractly in art.

Adverb accidentally is very commonly used to describe that something was done by chance.

It was done without previous intention and completely unexpectedly.

In the sentences below you can see how to use this adverb:

“He saw her accidentally and he was very surprised.” or “He didn’t plan to meet her but it happened accidentally.”

We can also say: “The collapse of a company cannot happen accidentally. Someone must be responsible for it.”

Some of the most common synonyms of adverb accidentally are: unintentionally, unwittingly, unexpectedly, suddenly, surprisingly and incidentally.

We can also say that something happened “by chance” or “by accident”, which means that it was not planed.

Another adverb that starts with the letter A is abruptly. It is used to describe that something has been done unexpectedly and by surprise.

However, it usually means that something has been done in a rude manner.

For example, we can say: “The movie ended abruptly and everyone was disappointed” or “He abruptly left the room and she knew that he was angry.”

Adverb abnormally is used when something was not done in a regular way.

The most common synonyms of adverb abnormally are extraordinarily and irregularly.

We have a following example for you: “The price of that house was abnormally high, so we gave it up.”

We can also say something like this: “He was behaving abnormally all the time, so they took him to a psychologist.”

The next example could be: “It was abnormally cold in Spain this winter.”

As you can see, adverb abnormally indicates that something was not done in a usual way. It was done in an abnormal way.

The next adverb that starts with the letter A is absurdly. It indicates that something was done in a way that is absurd and ridiculous.

It can also mean that something was done in a way that is completely unreasonable and inappropriate.

It was ridiculous and she could not take this offer seriously because the house is probably worth much more than that.

We can say for example: “The shopping center is open on weekdays and Saturdays from 8 a.m. to 8 p.m. Additionally, it will also be open on the next Sunday from 8 a.m. to 2 p.m.”

As you can see, something is done in addition to something usual. It is usual that the shopping center is open on weekdays and Saturdays, but in addition to that, it will be also open the next Sunday.

Also, we can use adverb additionally to introduce new information or fact. For example, we can say:

“I study English language and literature. Additionally, I work on weekends in a coffee shop.” It is something that I do in addition to studying.

We hope that you can see clearly now that adverb additionally means that something is always done extra or beside something else.

Also, if we say something and if we want to add a new fact or information, we will use adverb additionally, as we have already explained in a couple of examples.

Apart from all adverbs that we have mentioned, there is another adverb that starts with letter A and that is commonly used in everyday speech. It is adverb absolutely.

There are a lot of synonyms related to adverb absolutely, such as: totally, completely, entirely, undoubtedly, fully, perfectly, unconditionally and many others.

We are going to give you a couple of examples in which you can see the use of adverb absolutely.

Adverb absolutely can be used to intensify something that was described with a certain adjective. We have following examples:

“His claims are absolutely correct”, which means that there is no doubt whether he is telling the truth or not.

“It was an absolutely terrible situation” or “She was proud of her absolutely brilliant acting.”

“We were absolutely thrilled when we heard that she was pregnant.”

Adverb absolutely can be used in everyday speech in order to express agreement about something. It is an emphatic way of saying yes.

Take a look at the following example: “Would you like to go to coffee with me?” “Absolutely!”

On the contrary, in order to emphasize the rejection of something or disagreement, we can use the phrase “absolutely not”. For example:

“Do you agree with her?” “Absolutely not!”

Adverb anatomically is usually used in medicine. It means that something has been done in a way that is related to body structure.

This adverb can be associated with a human body as well as with an animal structure.

Sometimes this adverb can be related to a plant structure as well.

We will give you some examples that will describe you the use of this adverb:

“Do you think that Neanderthals were anatomically different from us?”

“Each plant in that picture was anatomically perfect.” or “Tigers are anatomically different from domestic cats”. 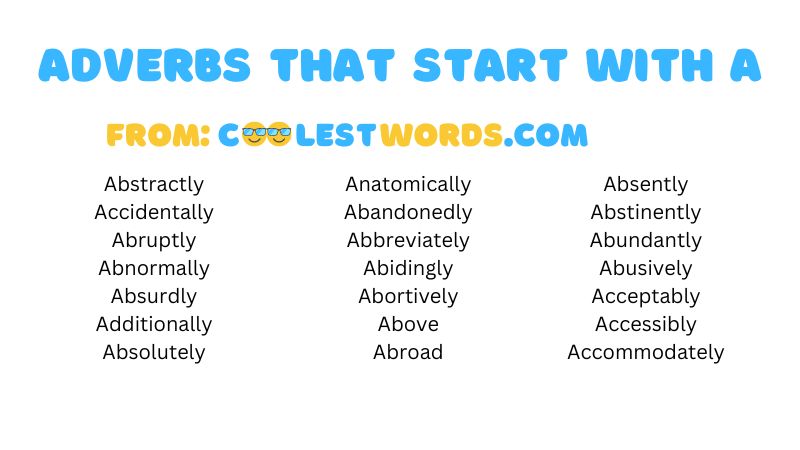 Other Adverbs Starting with A