As you probably know, adverbs are words that describe to us how something is done.

Therefore, they describe the way of performing an action.

In addition, adverbs can tell us where and when an action is taking place.

Adverbs are a very interesting type of words and in this text we will talk about them.

More precisely, the topic of this text will be adverbs starting with the letter B.

First we will tell you which are the most common adverbs that start with the letter B and we will give you a few examples for each of those adverbs.

We will also explain to you in what context you can use the adverbs that we will give you.

At the end of the text we will mention some more adverbs starting with the letter B that are often used in everyday speech.

The Most Common Adverbs That Start With B

As we have said, you will see now what the most common adverbs that start with the letter B are.

Actually, we can use adverb badly when someone is doing something without skills or without care.

For example, we can say: “During the whole concert they sang very badly”, which means that they didn’t sing well.

They sang in an inadequate manner and their concert was not successful.

In this case the synonyms of adverb badly can be unskilfully and carelessly.

If someone behaves in a bad and inappropriate manner, we can also use adverb badly. “He behaved badly yesterday when the guests came.”

However, if we say: “He did badly in his exam”, it means that he didn’t have success in the exam.

Adverb badly can also mean that someone treated someone else in a bad way, so we can say:

“He treated his wife badly all the time.” Also, we can say that someone “is treating his dog badly”.

It means that we can use adverb badly when someone behaves in a bad manner towards someone or something.

Also, adverb badly can be an opposite of adverb “well”, so we can say: “You should not think badly of his mother because she has good intentions.”

Sometimes adverb badly can be also used to say how much someone wants or needs somebody or something. We will give you an example:

“I miss my husband badly”, which means that I miss mu husband very much.

There is also a phrase “to feel badly about something””, which means that someone was ashamed because of something that he/she has done.

In this context we can say: “He felt badly about his decision to leave her.”

Adverb badly can also mean that something was done in an unpleasant and harmful manner.

As you could see, there are so many different uses of adverb badly and we hope that we helped you understand in which contexts you can use this adverb.

Another adverb that starts with the letter B is basically.

It means that the way in which something was done includes the most important aspects of that thing.

Adverb basically refers to the most important characteristics of something.

It means that something was done in a general or basic manner.

The most common synonyms of this adverb are essentially, firstly, fundamentally, mostly or primarily, but we can also say “in essence”, “at the bottom” or “first of all”.

You are going to see now a couple of examples that can help you see how to use adverb basically in sentences:

“This dish basically consists of broccoli, but you can also add other vegetables.”

“Basically it is not a big problem, but if you do not solve it in time, it can create serious complications for you”

“The exam was basically very easy, but there were questions that were not very clear.”

If something was done beneficially, it means that it was done in a way that has positive effects on something or someone.

You can see the following examples: “They affect beneficially our lives and we love to have them as friends.” or “This plant affects our organism beneficially and we should consume it regularly.”

The most common synonyms of adverb beneficially are favourably, helpfully and advantageously.

If something is done boringly, it means that it was done in a boring way. We will give you a couple of examples in order to see more clearly the use of this adverb.

“He yawned boringly and didn’t know what to do with himself.”

“She wanted to try something new because her life was boringly normal.”

Adverb bravely is used to describe that something was done with courage and willingness.

It means that someone was brave enough to face some dangers.

This adverb can also mean that someone was mentally brave and was willing to face his fears.

You can see the use of adverb bravely in the next examples:

“He defended himself bravely and attacked his opponent.”

“She was in a dangerous situation but she behaved bravely.”

“She faced her fears bravely.”

We hope that in these examples you can see clearly how you can use adverb bravely.

When we say brutally, your first thought must be something related to violence.

Adverb brutally means that something has been done in a violent way.

We have a sentence: “They tortured him brutally in the prison”, which means that they were cruel and brutal towards him.

However, adverb brutally can also be used to express something that is going to be said in a totally direct way, for example:

“She was brutally honest, even though she knew it would hurt him.”

In this case adverb brutally doesn’t have anything to do with aggression and violence. It is used to tell us how sincere she was.

In this case “brutally honest” means that she was completely honest, she didn’t lie at all.

Sometimes we can use adverb brutally to describe something that was very unpleasant.

For example, when we want to say that it was extremely cold outside, we can say:

“It was brutally cold outside.” It means that it was very cold.

There are also different synonyms related to adverb brutally, such as: ruthlessly, murderously, heartlessly, mercilessly, cruelly, fiercely and many others.

We use adverb believably to describe that something is done in a way that is believable and credible. It means that it is easy to believe in it.

“He acted in the movie very believably”, which means that the viewers were delighted with his acting in the movie.

His acting seemed so real that it was easy for people to believe in everything that they saw in the movie.

“He was lying so believably that everyone thought he was telling the truth.”

There are many synonyms of adverb believably, such as convincingly, creditably, plausibly, authentically, conceivably, etc. 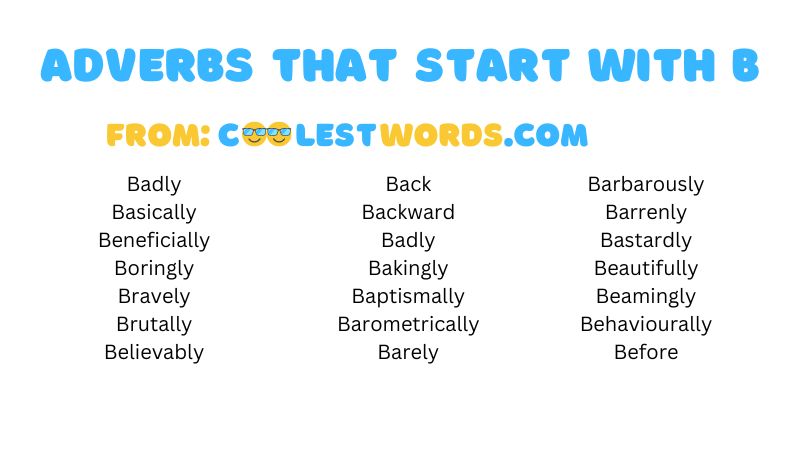 Other Adverbs Starting With B