In this text we are going to present you the adverbs that start with the letter C.

There are a lot of adverbs starting with C, but we have chosen a couple of the most interesting of them.

We will explain you their meanings and their uses in different contexts.

The Most Common Adverbs That Start With the Letter C

Adverb calmingly is used when we want to describe something that was done or said in a calming way.

Someone has done something in a soothing and tranquilizing way, in order to comfort another person.

There are a couple of examples in which you can see the use of adverb calmingly in different contexts.

“Don’t worry, everything will be fine”, he said calmingly.

“He looked at me calmingly as if he knew I was planning to leave”.

The most common synonyms of adverb calmingly are soothingly, comfortingly and relaxingly.

The comparative of this adverb would be “more calmingly” and its superlative is “most calmingly”.

We use adverb correctly if we have done something in a way that is correct and precise.

Something has been done without mistakes. It is completely true and suitable in a certain situation.

“You judged him correctly. He is a liar.” In this example we have the adverb correctly which means “in the right way”.

You evaluated that man in the right way and you realized in time that he is a liar.

Therefore, you didn’t trust him and you didn’t make a mistake like someone else, for example.

We have another example as well: “His action should be correctly interpreted”, which means that it should be interpreted according to a certain situation.

However, in the example “He correctly guessed my mom’s age”, adverb correctly indicates that something was done without any mistakes. It was completely correct and true.

Adverb correctly can be also used to describe the way in which someone behaves, so we have the following example: “He always behaved correctly towards her and she cheated on him.”

We are going to tell you now a couple of synonyms of adverb correctly: perfectly, exactly, properly, accurately, right, rightly etc.

This adverb comes from an adjective compassionate that means tender and merciful.

Someone is showing compassion or mercy while doing something.

She could feel his sadness and that’s why they both started to cry.

We have another similar example: “He listened to her story compassionately and he offered her his help.”

“She never treated her friends compassionately, even though she knew how hard their lives were.”

In this example we also have the adverb compassionately and we can understand that she never showed compassion to her friends who suffered a lot in life.

She never felt sorry for them and she has probably never tried to help them.

Instead of adverb compassionately you can also use some of its synonyms, such as: sympathetically, pityingly or mercifully.

One of the most common adverbs that start with the letter C is clearly.

We use this adverb every day and now we are going to explain you its meaning.

Adverb clearly means that something was done with clarity, which means that it was done in a way that is completely obvious and clear.

In the following example you will have the chance to see the use of adverb clearly.

“She told him clearly that she doesn’t love him anymore, so he certainly will not call her again.”

“Clearly, his behaviour changed completely after the divorce. He started going out and drinking more.”

In this case adverb clearly means that it is completely understandable that his behaviour changed after the divorce.

Also, it can mean that it is completely obvious and evident that he changed his behaviour.

“She is my favourite author because she always writes books concisely and clearly.”

In this sentence adverb clearly describes the way in which she is writing her books.

Her books are clear and concise and that’s why I love reading them.

When we want to describe something that was done with confidence, then we can use adverb confidently.

It indicates that something has been done in a confident way or that someone has confidence while doing something.

“I confidently entered his house, as if all those people who don’t like me weren’t there.”

This sentence says that I didn’t have any fear when I entered his house, even though there were people who don’t like me.

Also, when I entered the house confidently, I showed them that I’m sure of myself and that I don’t pay attention to them.

“I confidently told him that I was very proud of myself and that he could not play with me.”

He was completely sure of it because he is very self-confident and he has faith in his own qualities.

This adverb is usually used in books that describe past times.

Actually, this adverb is primarily associated with knights and their courage in old times.

“The knight of that era died fighting chivalrously in the war.” This sentence is a perfect example in which you can see the use of adverb chivalrously in relation to old times.

However, this adverb is used even today. It is commonly used to describe someone who is brave and courageous.

Actually, it is used to describe an act of someone who doesn’t have fears and who is ready to fight and to defend himself.

You can see the use of adverb chivalrously in the following sentence: “He was fighting chivalrously against the enemies and succeeded in defeating them.”

In the same context we can also say: “He endured that situation chivalrously and managed to get out of it without anyone’s help.”

Apart from all those meanings, adverb chivalrously can also indicate that someone did something in a gallant and respectful manner.

We can use this adverb when someone behaves like a gentleman, too.

“He behaved chivalrously and he offered me his coat.”

This is a great example in which we can see that adverb chivalrously can be used to describe a courteous behaviour of a man towards a woman.

Adverb chivalrously is commonly used in this context. 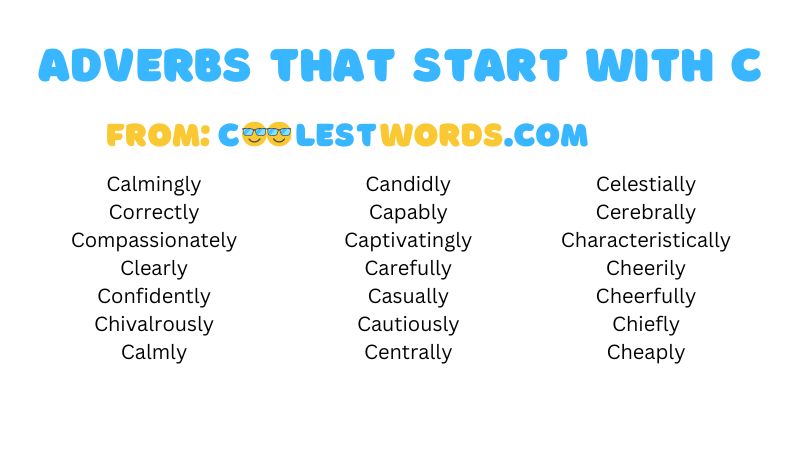 Other Adverbs Beginning With Letter C