In this text you will have the chance to see what the most usual adverbs that start with the letter D are.

We will mention a couple of adverbs that start with D and we will explain you their meanings.

Also, we will tell you how to use those adverbs correctly in sentences.

The Most Common Adverbs That Start With the Letter D

It is known that daily is a grammatical form for both adjective and adverb. Of course, we are going to focus on adverb daily. Adverb daily means that something occurs every day.

“He looks so good because he works out in the gym daily.” In this case adverb daily has also the meaning “every day”.

Some other examples that describe the use of adverb daily are:

“They have fresh bread in the store daily.”

“He is learning German daily because he is planning to move to Germany in the future.”

Also, we can use adverb daily in order to say that something is happening once, twice or three times a day.

Take a look at the example: “She eats fruit twice daily.”

Adverb dangerously is used to tell that something was done in a way that could hurt or injure someone.

Also, this adverb is used to describe that something is done in a way that can damage something.

We can say for example: “He lives dangerously”, which means that his life is full of dangerous things.

He tends to take a lot of risks in life and that is why he lives dangerously.

Sometimes dangerously can have the meaning “very”, so we can say: “Her grandmother was dangerously ill before she died”, which means that she was very ill and short after that she died.

We will give you another similar example with adverb dangerously: “His blood pressure is dangerously low, which means that it could lead to serious complications and even death.”

Some of the most usual synonyms of adverb dangerously are critically, alarmingly, desperately or seriously.

If someone behaves decently, it means that this person behaves in a way that is moral and acceptable among people.

Also, this adverb indicates that something has been done according to standards that are accepted in society. Look at the sentences below:

“Today, many children do not behave decently because their parents did not teach them to do so.”

“I will teach my daughter to behave decently and to respect older people.”

However, adverb decently can be also used as a synonym of adverb “satisfactorily”.

In this case it indicates that something is done according to standards that are acceptable and comfortable.

In this case we have the following example for you:

“Even though they had only one salary, they lived decently and they never complained that they lacked something.”

Adverb deliciously means that something was done in a delicious way.

In those examples adverb deliciously is used to describe something that has a good taste.

In this context we have the following example: “They were deliciously enjoying the pool and the sun”, which means that it was a pleasure for them to enjoy it.

Another adverb that starts with the letter D is deadly. It means that something is done in a way that can be fatal.

“This game was deadly dangerous” or “His illness was deadly serious.”

In these examples adverb deadly means that something was so dangerous that it could lead to death.

Also, adverb deadly can be used with the meaning “extremely”. In this context we can give you the following example:

The most common synonyms of adverb deadly are: fatally, mortally, deathly, life-threateningly, harmfully, lethally, dangerously, destructively, ghostly, extremely and many others.

Adverb deliberately indicates that something is done with intention.

This adverb is used when something didn’t happen by accident.

The sentence “He is doing it deliberately to annoy her.” is a good example in which you can see the use of adverb deliberately.

It means that he is doing something on purpose and with intention. He wants to annoy her.

“The police discovered that the fire was deliberately set”, which means that it was not just an accident.

The fire was intentionally set, which means that it was a clear intention of someone who did it.

However, adverb deliberately can also mean that something has been done in a very careful and slow manner.

For example, we can say: “He spoke clearly and slowly, but deliberately did not say what the point of the story was.”

Synonyms that are related to adverb deliberately are: intentionally, purposely, knowingly, purposefully, on purpose, etc.

We use adverb depressingly to say that something was done in a depressive way.

Someone was feeling depressed when he/she was doing something. There are a couple of examples below:

“She looked depressingly through the window and she was thinking about her whole life.”

“I did a couple of tests at the doctor and the results are depressingly bad.”

“It was depressingly cold outside today.”

If something was done desperately, it means that it was done in a desperate manner. Someone was showing despair while doing something.

We will give you a couple of examples in order to understand the use of adverb desperately.

“He tried desperately to get to her after all, but she wanted nothing to do with him.”

“She searched desperately for him, but she couldn’t find him”.

Also, adverb desperately can be used with the meaning “extremely”.

If we extremely need something, we can say that we need it desperately.

Take a look at the following example: “I desperately need a cup of coffee”, which means that I have an extreme need for coffee right now. I may not be feeling well because I didn’t have my cup of coffee yet.

You have seen some of the most frequently used adverbs that start with the letter D.

In addition, we are going to mention many other adverbs that start with this letter, too. 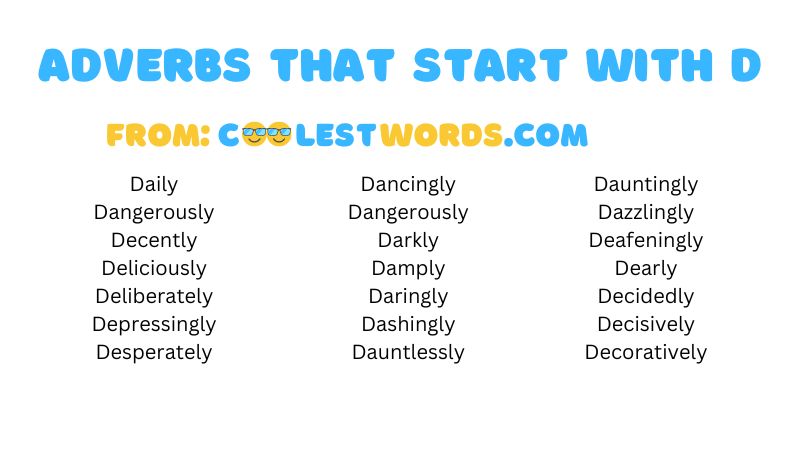 Other Adverbs Beginning With D