Adverbs are a type of words that tell us how someone does something.

Actually, adverbs describe the way in which something has been done.

In English language, adverbs are usually formed when the suffix -ly is added to the adjective.

However, there are also some other adverb forms as well as some irregular adverbs, but we will not deal with them in this text.

This text will be about adverbs that start with letter K, and they are regular in most cases.

We are going to tell you what the most common adverbs that start with the letter K are and we are going to explain to you what each of those adverbs means.

The Most Common Adverbs that Start With Letter K

First of all it is interesting to say that word kindly can be either adjective or adverb.

If we use this word as an adjective, it has the meaning of gentle and kind. It refers usually to persons and it describes them as kind, generous and warm-hearted.

For example, we can say “He is a kindly person”, which means that someone is a gentle or generous person who is ready to help you if you need it.

However, we can use word kindly as an adverb as well. In this case adverb kindly has a couple of different meanings.

First of all we have to say that adverb kindly can mean that something has been done in a kind way. It means that it has been done with kindness and with heart.

For example, if something has been said kindly, it means that it is said tenderly and with affection. In this case adverb kindly could be a synonym of “friendly”.

Another possible meaning related to adverb kindly is helpful. This adverb means that something or someone can be helpful and contribute to someone’s well-being.

In this case we can say “This diet was kindly to my mother and it helped her lose a couple of pounds”.

However, it is not all when it comes to the meanings of adverb kindly.

This adverb can also be used in another context. It can mean that something is done politely or with courtesy.

In this case we have the next example: “Would you kindly give me the knife?”

As you could see, adverb kindly can have different meanings and it is used in different contexts. It is definitely one of the most commonly used adverbs in English language.

Some of the most common synonyms of adverb kindly are friendly, graciously, politely, nicely, etc.

The next adverb that we are going to mention and that starts with letter K is knowingly.

This adverb can be a synonym of “deliberately” and “intentionally”, which means that something has been done on purpose. In this context the synonym of knowingly could also be “purposely”.

We are going to give you an example in which adverb knowingly was used with the meaning of “intentionally”.

“She has knowingly embarrassed him in front of others” could be a great example in this case.

It means that she has done it with intention. She already knew the possible consequences of her action and she wanted to embarrass him. It was her intention.

In this sentence adverb knowingly was used with the meaning of intentionally, deliberately, on purpose.

Another meaning related to adverb knowingly is that someone knows something that should be a secret. For example, if we say ‘’She smiled at him knowingly”.

In this sentence adverb knowingly means that she already knows and understands something that he keeps as a secret.

The third meaning of adverb knowingly can be also “skilfully”, which means that someone has great skills to do something.

He played football in a masterly way and people were probably delighted with his skills.

This is another adverb that starts with K and it comes from the verb “to kill”. Even though you may be thinking that it has something to do with killing, we have to say that the meaning of this adverb is completely different.

In most cases adverb killingly is used in a completely different context and it means that something is done in a humorous manner.

Actually, adverb killingly refers to something that was done in a manner that will make someone laugh very much.

“I like spending time with him, because he is killingly funny” could be a great example in which we use adverb killingly.

As you can suppose, this adverb has something to do with karma. It is telling us that something is done in a karmical way. This adverb is not comparable.

In order to understand better the meaning of this adverb, we are going to give you a following example: “Viewed karmically, their relationship does not have a good future.”

It means that if we take into account karma and some things that may happened in the past, then it may not be possible to maintain a good relationship.

Another example could be: “Karmically speaking, I am sure that she has deserved all bad things that are happening to her”.

This sentence could mean that she has done bad things in the past and now bad things are coming back to her. That’s why it is said that she deserved that what is happening to her.

We will give you one more example that will help you understand all the contexts in which you can use adverb karmically.

“It is believed that the cycle of someone’s rebirth is karmically determined”, which means that it is determined by someone’s karma.

This adverb is commonly used for jokes. It means “in a joking manner” or “jokingly”.

“She said kiddingly that she would marry him” is a good example for the use of adverb kiddingly.

Adverb kilometrically is associated with kilometres that someone has travelled and it means “in terms of kilometres” or “in a kilometric way”.

We can give you the next example: “Kilometrically, they live very far away, but if you go by plane you can get there in only two hours”.

The meaning of this adverb is related to knights and it means that something has been done in a knightly way.

“Her husband behaved knightly in that situation and defended her against the enemy”.

The synonym of adverb knightly could be chivalrously. 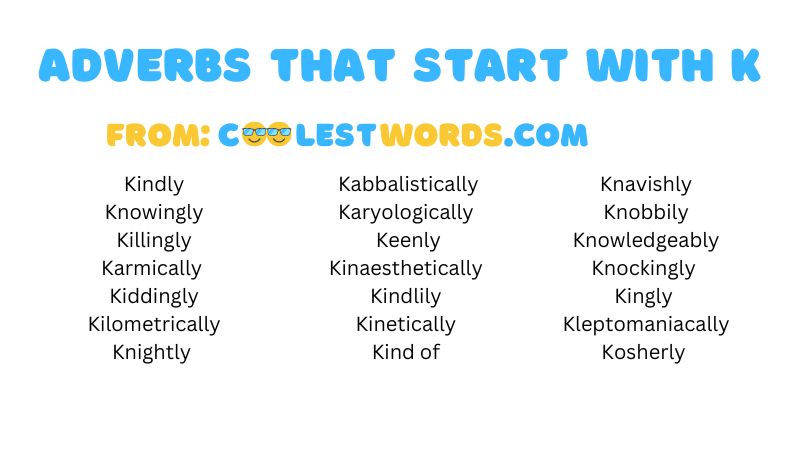 Other Adverbs Beginning With Letter K

In this text you have seen some of the most frequent adverbs that start with letter K.

We have told you what they can mean and in which contexts you can use them.

The next time you see any of these adverbs, we are sure that you will know how to use them in the right way in the sentence.