In this article we are going to talk about the adverbs that start with letter L.

The Most Common Adverbs That Start With the Letter L

One of the most common adverbs that start with letter L is lately.

The synonym of adverb lately is “recently” and we are going to give you an example in order to understand better the use of this adverb.

“I haven’t seen her lately. Maybe she moved to another city”.

It means that you have not seen her long ago.

Instead of lately, we can also say phrases “in recent times” or “in the last couple of weeks”.

As its name already says, adverb lazily comes from the adjective “lazy”.

Lazily means that something is done in a very slow way.

This adverb also indicates that someone is unwilling to do something.

If someone is doing something lazily, it means that this person doesn’t want to exert herself in a physical way.

The best example for it could be a sentence: “He was lying lazily on the bed”.

It means that he was lying completely relaxed and without energy.

It also means that he didn’t want to exert himself in any way.

This person was not motivated and just wanted to lie lazily on the bed.

Adverb lightly is an adverb that can have many different meanings.

First of all we have to say that lightly can be understood as “easily”.

Another example could be “She kissed him lightly on the forehead”.

In this case it means that she kissed him gently and without force.

However, there are also other meanings related to adverb lightly.

It could also mean “not much”.

In this case we have the sentence “It was raining lightly”, which means that it didn’t rain much, so you could go without an umbrella, for example.

Also, if you want to lose pounds and to change your diet, you should try to avoid eating heavy and caloric foods.

It means that you should eat lightly if you want to lose weight.

We can use adverb lightly when we talk about someone who did not sleep well.

If someone’s sleep is not good and if that person wakes up easily during the night, then we can say that this person is a light sleeper or that he/she “sleeps lightly”.

There are also other meanings related to adverb lightly.

Also, it could mean that you don’t pay too much attention to something that you have said.

You said something without thinking and worrying about that.

In this case the synonym of lightly could be “nonchalantly”.

Adverb lightly has other meanings as well.

It could mean that something is not considered seriously.

For example, if we say “She takes lightly all the problems”, it means that she doesn’t take them seriously.

This person takes her problems for granted and she is often unaware of the seriousness of the problems.

Sometimes adverb lightly can also mean that someone is treated or punished less than he/she deserved.

In this case we have an idiom “to get off lightly”.

We are going to give you an example, in order to understand better the meaning of this idiom.

“Even though she committed a big theft, she got off lightly with only two months in prison”.

It means that she received a smaller prison sentence than she actually deserves.

This adverb means that something has been done with limits or in a limited way.

Actually, there must have been certain restrictions in doing something.

The most appropriate synonym of adverb limitedly would be “restrictedly”.

Now we are going to give you an example in order to see the use of this adverb.

We have the sentence: “It is allowed to consume sugar if you want to lose weight, but you should consume it limitedly”.

It means that it is allowed to consume sugar even if you want to lose pounds, but you need to consume it with limits, which means that you should not eat too much sugar.

There is one more adverb that starts with letter L and it is adverb lively.

This adverb is frequently used and it is easy to understand its meaning.

Adverb lively means that something is done in a vibrant and vivid manner.

According to that, we can say that the most common synonyms of lively are “vividly” and “vibrantly”.

One of the most common adverbs that start with L is logically.

It means that something was done with logic.

Namely, someone has used his own logic in order to do something.

“If you think logically, you will realize that he could not have been at the scene of the crime at the time. It means that he is innocent”.

Thinking logically means that you need to include logic in order to realize something.

Something may be too obvious, but you need to think thoroughly and to use your own logic.

Some of the most common synonyms of adverb logically are reasonably, intelligently or sensibly.

The next adverb that starts with letter L is loyally.

If something was done loyally, it means that it was done in a loyal manner.

To be more precise, doing something loyally represents your faithfulness to someone.

You are loyal to someone and you support that person.

Below we will give you one sentence as an example in which you will see how this adverb is used.

“He is an excellent soldier and he serves his country loyally”, which means that he would never betray his country.

He stays loyal even in the most difficult times.

In this case adverb loyally could also be replaced by adverb “faithfully”.

Adverb luxuriously is used when something has been done in a luxurious and expensive way.

For example, we have the sentence which represents the use of adverb luxuriously: “We stayed luxuriously in a 5-star hotel”.

Another example could be: “She has a big house with a swimming pool and lives luxuriously in Paris”.

We hope that it is clear now in which context you can use adverb luxuriously.

Don’t forget that this adverb is always related to luxury and expensive things. 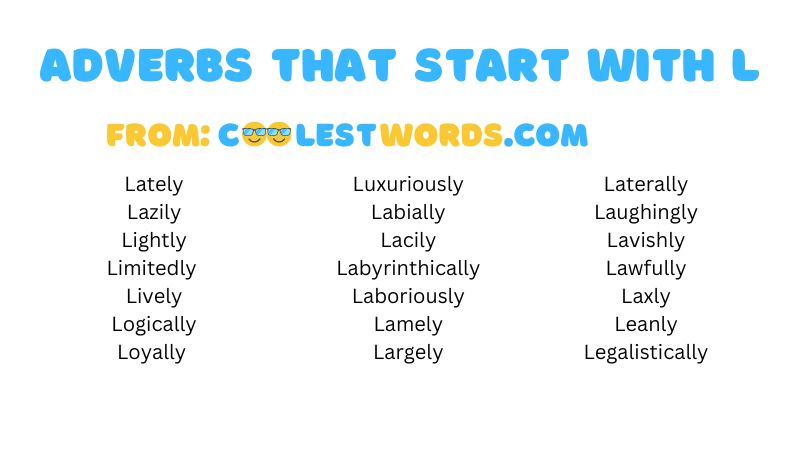 Other Adverbs Starting With the Letter L