Adverbs are words that tell us in which way something is done.

Many people confuse adverbs with adjectives and they are not sure how to tell the difference between these types of words.

In this text we will deal with adverbs that begin with the letter M.

There are a lot of adverbs that start with this letter and we are going to mention some of the most common of them.

We will help you understand what all those adverbs mean and in which contexts you can use them.

The Most Common Adverbs That Start With the Letter M

Adverb magically comes from the noun magic and it means that something was done in a magical or in a beautiful way.

This adverb can also mean that magic was used to do something.

Take a look at the following sentences in order to understand better in which context it is possible to use adverb magically:

“ … and then the princess magically appeared in the front of the castle” or “The pain in her legs magically disappeared the next morning”.

Sometimes adverb magically can be related to something bewitching, too.

In this case we are going to give you the following example:

“The frog is then magically transformed into a prince”.

There is also an adverb madly that is usually related to something insane.

It actually means that something is done in an insane manner.

For example, we can say: “She was running madly trying to find the child who was lost”, which means that she was like insane in that terrible situation.

However, adverb madly can also have the meaning of extreme and too much.

This adverb comes from the adjective “majestic”, which means magnificent and imposing.

According to that, adverb majestically means that someone is doing something in a majestic or magnificent way.

Adverb majestically is also associated with power and great admiration.

In the following examples you will see the use of adverb majestically:

“She entered the door majestically and everyone was delighted with her appearance” or “She behaved majestically in that situation which was not very pleasant”.

It means that something has been done in a beautiful and impressive way.

If something was done magnificently, it has certainly left impression on someone.

For example, we have the sentence: “I was delighted by her magnificently decorated Christmas tree”.

Apart from majestically, some other synonyms related to adverb magnificently are splendidly and gorgeously.

Another adverb that starts with letter M is maliciously.

This adverb describes that something was done in a malicious or malevolent way.

It means that someone has bad intentions and wants to harm someone else.

We are going to give you a couple of examples with this adverb.

“She acted maliciously in that situation and it was obvious that she wanted to hurt him”.

In this sentence it is clear that she has bad intentions towards him.

“She smiled maliciously and left without saying anything”.

It means that she smiled feeling malice and not having any good intentions.

As you can suppose, adverb maturely comes from an adjective “mature”.

In the sentence “She is only 12 years old, but she is very mature” we use an adjective mature, but when we say “She is acting maturely although she is only 12” we use adverb maturely.

On this example you can see clearly the difference between adjective “mature” and adverb maturely.

Adverb maturely means that something is done in a very sensible manner.

For example, if a child was behaving like he/she was already an adult, then we use adverb maturely.

A synonym that we can use instead of adverb maturely would be “sensibly”.

We can also say: “These arrangements were very maturely organized and all guests were satisfied”.

In this sentence adverb maturely means that something was done in a completely developed way.

In this case adverb maturely is usually associated with economy, business, etc.

It indicates that something has been done to its maximal extent or to its highest degree.

If you have done some things as much as you could or as much as it was possible, then you can use adverb maximally in order to describe it.

For example, there is the sentence “He is maximally devoted to his job”.

It means that he is completely devoted to his job.

He is concentrated on his job all the time and he is doing as much as he can in order to be productive and to have success.

Some of the most common synonyms of adverb maximally are supremely, extremely, ultimately, maximumly, majorly, etc.

Someone is doing something in a certain way that allows him to express his own emotions and thoughts.

Or we can say that something was done in a very important manner.

“He looked meaningfully at his wife”, which means that his look could tell a lot to her.

In his look she could recognize his thoughts and his emotions at that moment.

Or we can say “He made a plan meaningfully and that’s why he achieved an excellent result”.

It means that he thought carefully and considered all details before making a final plan.

Adverb methodically is another adverb that starts with letter M.

This adverb means that something has been done in a very systematic way.

It can also mean that someone did something logically and carefully.

All that someone has done was well organized and there was order in it.

That’s why we can say that something is done methodically.

“She wrote this work methodically”.

It means that she was doing it in a careful way and using certain methods.

Maybe is an adverb that we use every day.

It is one of the most frequently used adverbs in English language.

Adverb maybe means that something is possible to happen.

There is a possibility that something will happen, but that cannot be said with complete certainty.

There is a possibility that it happens, but we cannot be absolutely sure about that.

According to that, we can also say that adverb maybe can express our uncertainty about something.

We may not be sure if something is going to happen or not, so we have the sentence: “Maybe he didn’t commit the crime”.

In this sentence we can see that you are not sure if someone has committed the crime or not.

In this case adverb maybe represents your own uncertainty about something.

The most common synonyms for adverb maybe are ‘’perhaps” and “possibly”. 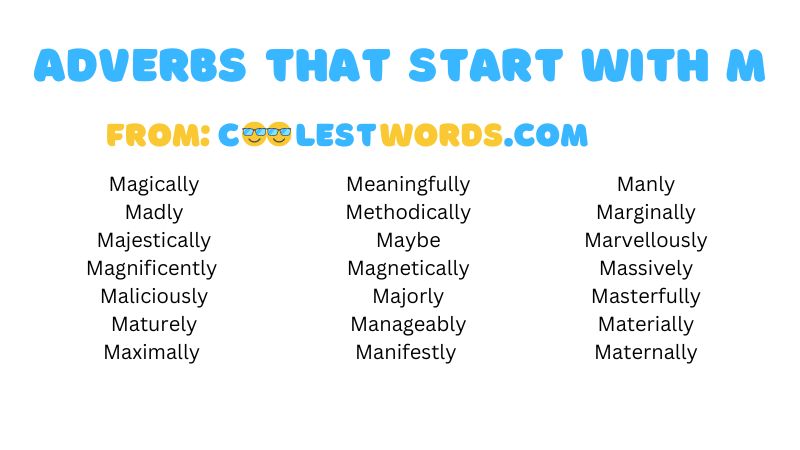 Other Adverbs Starting With the Letter M