In this article we are going to talk about the adverbs that start with the letter N.

There are a lot of adverbs that start with this letter and today we are going to mention some of the most common of them.

We are also going to tell you what the adverbs that start with the letter N can mean and how you can use them in sentences and in everyday speech.

The Most Common Adverbs That Start With the Letter N

Namely is a very common adverb that is usually used to give more information about something that has been already mentioned.

Namely is one of the conjunctive adverbs and it is in the same group of adverbs as however, therefore, in addition to, rather, incidentally, etc.

We have the following example: “They have two children, namely daughter and son”.

As you can see, a comma is usually placed before an adverb namely.

Some of the most common synonyms of adverb namely are explicitly, that is to say and specifically.

As you can see, adverb nervously comes from adjective “nervous” and it means that something has been done in a nervous way.

If you have done something nervously, it means that you were nervous when you were doing something.

In the following example: “He was walking nervously around while he waited the news from the hospital” you can see the use of adverb nervously.

We use adverb never every day a couple of times. This is one of the most frequently used adverbs.

Adverb never means at no time. For example, you can see the following sentence:

“I have never visited my cousins in Paris”. It means that you were never in Paris and you will probably never go there.

Adverb never can also have the meaning “not at all” and you can see its use in the next example:

If something has been done nonchalantly, it means that it was done in a very relaxed manner.

If you have done something nonchalantly, it also means that you didn’t show any sign of concern.

We have the following example: “She said that nonchalantly”, which means that she said something without any worry and also without any interest.

She was too relaxed when she said that. She didn’t show any emotion.

It means that she said something nonchalantly.

Also, we can say that if someone did something nonchalantly, it means that this person was pretty cool while doing it.

Therefore, the adverb nonchalantly implies that someone did something without showing any concern, any interest or any emotion.

Because of that we can say that something was done in a completely relaxed way and without thinking.

Adverb normally is telling that something was done in a normal or usual way.

For example, we can say “Try to behave normally, even though you may be angry right now”.

It also means that there is a certain rule in doing something, so when something was done normally, it means that someone has respected the rule.

“Normally, the training lasts one hour, but sometimes we can stay 15 minutes longer”.

In this sentence adverb normally means that it is a general rule.

Adverb nicely is very common and it indicates that something was done in a satisfactory manner.

It was done pleasantly and you are satisfied with it.

“His house is nicely decorated” is a good example.

An adverb nicely means that house was decorated in an attractive way and that it is very nice.

Sometimes adverb nicely can have another meaning as well.

It can mean that someone did something in a friendly way. In this case we have the next example:

“She asked me nicely to borrow her the car”.

In this case adverb nicely means that she was very friendly when she asked me that.

She asked me in a very polite and kind manner.

We are going to show you this use of adverb nicely with the following example:

“This book can nicely describe how the Roman Empire fell”.

In this case adverb nicely means that the fall of the Roman Empire was exactly and carefully described in the book.

The next adverb that begins with N is nimbly.

We use this adverb to say that something has been done quickly and easily.

We have the following example there:

Another meaning of nimbly is that someone has the ability to think and to react very quickly.

“He avoided nimbly the question about that girl”.

If something was done naughtily, it means that it was done in a bad or naughty way.

This adverb is usually associated with children.

When children behave badly, we usually say that they behave naughtily, which means that they don’t want to obey their parents.

Also, it is important to mention that adverb naughtily can mean that something was done in a rude way.

Its meaning can also be associated with sex.

If something has been done neurotically, it means that it was not done calmly and reasonably.

You must be worried because of something and because of that you are acting neurotically.

Some typical examples that can perfectly describe the use of adverb neurotically are: “She was looking around neurotically and she didn’t know where to go” or “She was neurotically jealous of his colleague”.

Also, adverb neurotically can refer to neurosis, which is a serious health condition.

Neurosis is a mental disease in which someone has big fears and worries about something.

Adverb neurotically is also used when someone talks about neurosis.

Another adverb that starts with the letter N is non-politically.

This adverb means that something is done in a way that is not related to politics.

For example, “We will establish the boundaries between these countries non-politically”, which means that boundaries will not be based on political relations that exist between the countries.

This is a popular adverb that we use often. Its meaning is “these days” and it usually refers to some routines and habits.

We will give you an example: “Nowadays, people are increasingly watching reality shows to escape from everyday life”.

Adverb nowadays is commonly used to describe something that is repeating all the time. You can see the following examples:

“Nowadays, people distance themselves more and more from each other” or “I am trying to concentrate more on my work nowadays and think less about my worries.”

Instead of adverb nowadays we can simply say “these days” or “today”. 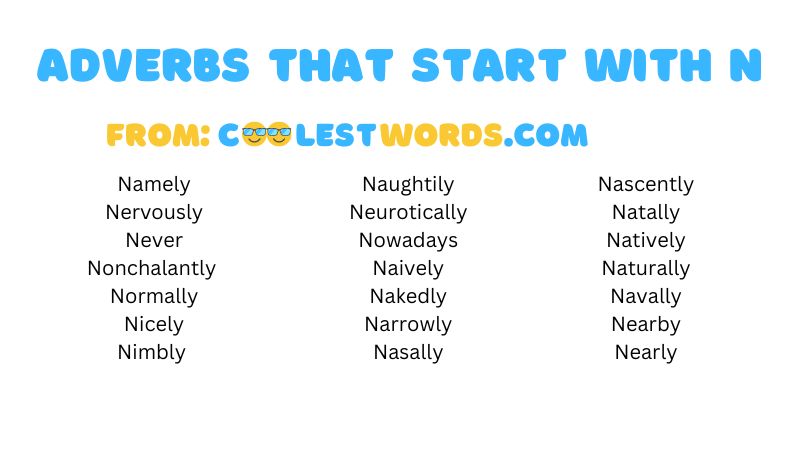 Other Adverbs Starting With the Letter N