Knowledge of grammar rules is very important in order to speak and write correctly.

But, sometimes we are not sure how to use a certain word correctly and where to put it in a sentence.

There are problems especially when it comes to the use of certain adverbs.

In this article we will deal with the adverbs in the English language that start with the letter O.

There are really many of them, but we will try to choose the ones that are most often used.

We will tell you what they mean and in which contexts you can use them.

If you read this article, you will learn how to correctly use adverbs starting with the letter O.

The Most Common Adverbs That Start With the Letter O

One of the most common adverbs that start with the letter O is obediently.

This adverb means that someone is willing to do something that was ordered to him.

You can see the use of adverb obediently in the following examples:

“She followed obediently all the instructions of her mother” or “He obediently listened to his father”.

In these examples you can see that adverb obediently is usually used for children who obey their parents.

We can also say “She obediently left the room”, which means that she was willing to do something that someone ordered to her.

In such examples there is always some authority that gives tasks and obligations to someone who fulfils them with willingness, or we can say obediently.

We have another example as well:

“Her dog followed her obediently”, which means that her dog obeyed her and did what she told him. Her dog was obedient in this case.

If something has been done objectively, it means that something is done in an objective manner and it is based only on facts.

We have the following example: “If we look objectively, this situation is not so dangerous”.

If you do something objectively, it also means that you are not influenced by your emotions or opinions.

Also, adverb objectively means that you are doing something in a way that doesn’t include your personal beliefs.

“Please tell me objectively if I am wrong in this situation”.

If you are doing something in an obsessive way, then you do it obsessively.

It means that you think very much about something and you may be even obsessed with it.

For example: “She is obsessively devoted to her children”, which means that she is devoted to them too much.

Another adverb that starts with the letter O is obviously.

It means that something is done in a clear way that is easy to understand.

It is the fact that other people can easily understand. If something was done obviously, it means that it was done in a completely clear manner.

We can use adverb obviously in the following sentence: “He is obviously a very good person”.

There is no doubt that he is a good person.

Some of the most common synonyms of adverb obviously are evidently, apparently, transparently and clearly.

Adverb occasionally means that something is done or it is happening only from time to time.

When it comes to adverb occasionally, we can also say that something is happening in irregular intervals, which means only sometimes or sporadically.

“You can give fruits to your rabbit, but only occasionally”. This sentence could be a good example where you can see the use of adverb occasionally.

We can also say: “I don’t live with my mother anymore, I’m visiting her occasionally”.

It means that I don’t visit her regularly. I go to her only sometimes.

Officially is a very frequent adverb that starts with the letter O. It means that someone did something in an official manner.

Actually, someone who is a certain authority has done something in an official way.

We are going to give you a couple of examples in which you will see the use of adverb officially:

“The exhibition was officially opened in June”, which means that June was the official time when the exhibition started.

“It was officially announced that the war would soon end”. It is something that was told to the public.

Someone of the important politicians made this announcement.

Officially, they are still employees, but they may be waiting to be fired.

That’s why they may not come to work.

Adverb officially is also used when something was told to the public, which can be true, but it doesn’t have to be true.

“Officially, the president died of lung cancer”, which can be true, but it doesn’t have to be true.

It is only something that was told officially to the public, but it doesn’t have to mean that it is true.

It can happen that the death of the president was caused by some other reasons.

Maybe he was killed, but it was announced to the public that he died because of his disease.

However, the adverb officially does not always have to be related to some authority and power.

Sometimes this adverb is used in everyday speech and it can be seen in the following example: “We are not officially in a relationship but we are seeing each other occasionally”

Adverb otherwise is used to introduce something that may be done in a different manner.

Actually, this adverb is one of conjunctive adverbs that is used to connect two sentences.

The second sentence is actually telling us what would happen if something from the first sentence hasn’t happened.

In other words, it can mean that the effects or results of something will be different if a certain command or suggestion has not been followed.

Take a look at the following examples in order to understand more clearly the use of adverb otherwise:

“She must obey her parents. Otherwise, her parents won’t let her go outside” or “I have to save money. Otherwise, I won’t have the chance to go on vacation this year.” 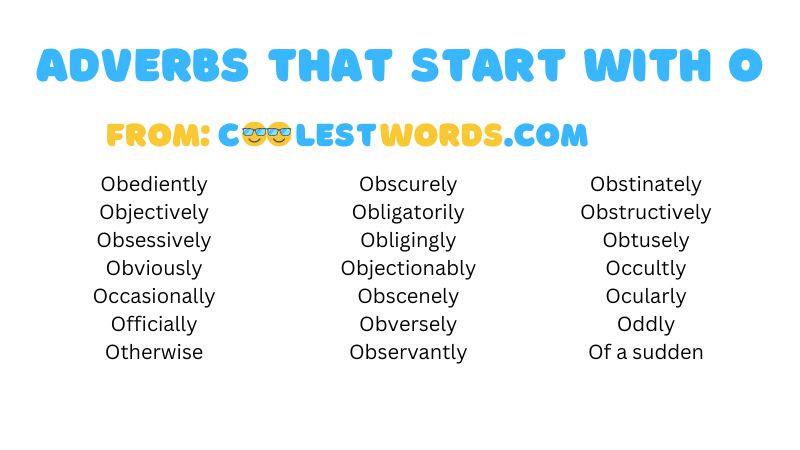 Other Adverbs Starting With the Letter O

On a regular basis