Adverbs are words that are telling us the place, time, manner, cause or circumstances in which something has been done.

Actually, adverbs describe us the way in which something has been done, as well as the time and the place of a certain action.

Also, adverbs are words that can tell us a degree in which something was done or they can describe circumstances related to a certain action.

It is important to know that adverbs are not always single words, but can also be phrases.

Those phrases can occur as an adverb clause for place, time, manner, etc.

In this article we are going to talk about the adverbs that start with the letter Q.

There are not many adverbs starting with this letter.

However, we are going to mention a couple of the most common adverbs that start with the letter Q.

Also, we are going to tell you what those adverbs can mean and we will explain you their use.

We will explain you the uses of those adverbs in sentences, so that you can understand more easily in which contexts you can use them.

The Most Common Adverbs That Start With the Letter Q

One of the most common adverbs with letter Q at the beginning is quickly. We use this adverb in our everyday speech very often.

Adverb quickly means that something has been done very fast or rapidly. There was no delay in doing something.

We can say for example: “He quickly realized that he was wrong.”

It means that it wasn’t long before he realized he was wrong. He realized it rapidly.

There is also an example “After contracting that disease, he died very quickly”, which means that he died very soon or after a short period of time.

“He is doing his job quickly and efficiently and that’s why his boss appreciates him very much.”

In this sentence we have adverb quickly that is used with the meaning “fast” or “rapidly”.

We can also say that he is not slowed down and he does not need much time to complete his work.

We will give you one more sentence in which you will have the opportunity to see the use of adverb quickly: “She replied to my messages quickly.”

It means that she replied to my messages rapidly and after a short time. I didn’t have to wait long for her answers.

In the following example adverb quickly has also been used with the meaning “soon”:

“Don’t worry because the situation will change quickly”, which means that it will change very soon.

Adverb quietly is also a very common adverb that starts with the letter Q.

This adverb is used to describe that something was done without noise.

Actually, when something was done quietly, it means that nobody was making noise and nobody was talking loud.

Adverb quietly indicates that something was done in a quiet way or in silence.

Below we are going to give you a couple of examples in order to understand the use of this adverb more clearly.

“He left the room quietly so as not to wake her.” In this sentence adverb quietly means “silently”.

He didn’t want to wake her and because of that he left the room without making any noise.

There is also another sentence with adverb quietly: “He was talking so quietly that nobody could understand him well.”

It means that his voice was very quiet and it was hard to hear and understand what exactly he was talking about.

“She lived quietly and peacefully in her little house away from everyone”, which means that she lived in a very quiet manner.

She didn’t make any noise and she was not noticeable to other people. She lived in her silence away from everyone.

That’s why we can also say that she lived quietly. In this context adverb quietly could be substituted with the adverb “discreetly”.

The most common synonym of adverb quietly is silently, but we can also say that something was done softly or stilly.

Other synonyms of adverb quietly could be soundlessly, mutely, noiselessly, inaudibly.

Sometimes this adverb can be also used with the same meaning as adverbs privately and discreetly.

Adverb quite means that something has been done to a certain degree and in this context adverb quite is a synonym of adverbs relatively, sufficiently or pretty. It is always used in a positive context.

For example, we can say: “She is quite a good actress”, which means that she is relatively good actress.

On the other side, adverb quite can be also used with the meaning “absolutely” or “completely”.

“I’m quite sure he’s the killer”, which means that I am absolutely sure that he is a killer.

“Tell me quite frankly, what do you think about our marriage?” In this sentence adverb quite is also used with the meaning “absolutely”.

When we say “Tell me quite frankly”, it means “Be absolutely honest”.

As you can see, the adverb quite can mean relatively or completely, depending on the context in which it is used.

Adverb queenly is always associated with a queen. It means that something is done in a way that is typical for a queen. Take a look at the example below:

“She was a woman with a queenly style.”

“People respected her because she always behaved queenly and she had royal manners.” It means that she behaved as if she were a queen.

Adverb queerly is used to describe that something was done in a very strange or unusual manner.

This adverb can also mean that something was done or that someone behaves in a perplexing way.

For example, we can say: “I don’t know what is going on with him. He has been acting queerly lately.”

It means that he has been acting in a strange and unusual way. His behaviour was not usual and normal.

“She was looking at him queerly at that moment”, which means that she was confused and strange at that moment when she looked at him.

Another example that can describe the use of adverb queerly is: “That money has queerly disappeared”, which means that its disappearance is strange and unusual.

The most common synonyms of adverb queerly are strangely, oddly, funnily, etc. 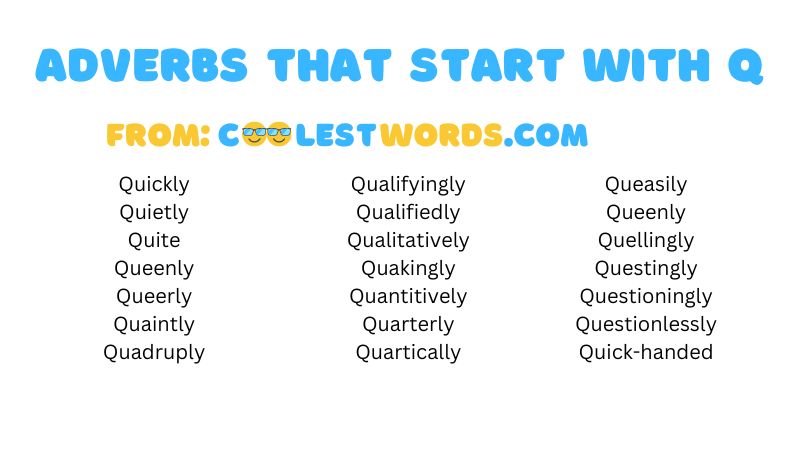 Other Adverbs Starting With Q

You have seen some of the most common adverbs that start with the letter Q and we hope that this article was helpful to you.

We hope that from now on you will know in what context and in what way the adverbs that we have presented to you in this article are used.