The topic of this text will be adverbs starting with the letter R.

We will mention those that are most often used in speech and we will explain you their meanings.

The Most Common Adverbs That Start With the Letter R

If something was done rationally, it means that it was done in a rational way.

In other words, it means that something was done without emotions.

A certain action has been based on reason, so we can say that adverb rationally is usually a synonym of adverb “reasonably”.

There is a good example in which you can see how to use adverb rationally in a sentence:

“Don’t panic right away, try to think rationally and to see how to get out of that situation.”

When we say: “He has done it rationally”, it means that he turned on reason and turned off emotion while he was doing something.

We can also say: “They discussed everything maturely and rationally”, which means that they discussed on a mature and reasonable level.

They did not rely on emotions but they tried to talk rationally and logically.

There is one more example that can be useful for you in order to understand the use of adverb rationally: “Rationally, she shouldn’t be in a relationship with him.”

It means that he doesn’t deserve her for some reason and if emotions are excluded then it is clear that he is not the guy for her.

If we rely on reason, then we come to the conclusion that she needs someone else.

Another adverb that starts with the letter R is randomly. This adverb describes the way in which something was done.

Actually, it means that something was done without any method and without previous planning.

There was not any determined pattern or regularity in which something was done.

We can say for example: “They picked the lottery winner randomly”, which means that it was pure luck and coincidence to choose precisely that person.

There is another example as well: “He randomly chose who would be in his team”, which means that he didn’t have any method when he was choosing them. He did it at random or randomly.

You can see the use of adverb randomly in the following sentence, too. “He chose songs for his playlist randomly”.

Rapidly is an adverb that is telling us that something was done with rapid movements or quickly. You can see an example below.

“The crime rate in the city is growing rapidly”, which means that there are every day more and more criminals in the city.

We can also say that the crime rate in the city is growing very fast or very quickly.

“He rapidly ran in that direction trying to catch up with him”.

It means that he was running with rapid movements or we can say very quickly.

We will give you another example in which you can see that someone has done something in a rapid manner: “He put on his jacket rapidly and went to see what was going on.”

There are a couple of synonyms of adverb rapidly, such as: quickly, speedily, fast, swiftly or promptly.

Ruthlessly is one of negative adverbs that start with the letter R.

This adverb indicates that something was done without any compassion for other people.

It was done in a ruthless way, which means without compassion and pity.

We are going to give you a couple of sentences with adverb ruthlessly in order to understand its use and its meaning in different contexts.

“He ruthlessly left her standing alone on the street in the dark”, which means that he didn’t have any compassion towards her.

He didn’t care what is going to happen to her at that moment.

We can also say in this case that he didn’t have compassion towards her.

“She told him ruthlessly that she no longer wanted to be married to him because she had fallen in love with another man”.

In this example, the adverb ruthlessly means that she said something to him without caring about his feelings and she didn’t care if she would hurt him.

“His own dog attacked him and bit him ruthlessly all over his body”.

In this sentence adverb ruthlessly is used with the meaning “ferociously”.

However, adverb ruthlessly doesn’t have to mean that something is always done in a brutal and ruthless manner.

Look at the following example in order to understand it better:

“She is ruthlessly honest and she always says things like they really are”.

In this case adverb ruthlessly does not have such a bad meaning as it only indicates that she is a completely honest person.

She says her honest opinion, even at the cost of someone getting angry with her and being offended.

That’s why the term “ruthlessly honest” is used in such situations.

In this context we can also say that someone is “brutally honest”.

Some of the most common synonyms of adverb ruthlessly are: mercilessly, barbarically, inhumanly, unkindly, heartlessly, relentlessly, ferociously, etc.

One of the most commonly used adverbs in everyday speech is adverb really.

This adverb describes that something was done truly and unquestionably.

We will give you a couple of examples below.

There is no doubt and no question. We can also say that he is a truly good football player.

Another example with adverb really could be: “It seems that they are really close to each other.”

We can also make a question: “Do you really think that?” or “Is she really sick?”

Other examples with adverb really could be: “It is really great outside.” or “He is running really fast.”

Sometimes adverb really is also used to emphasize something, for example:

“Really, it is not funny. You should stop doing that.”

The most common synonyms of adverb really are: actually, in fact, honestly, truly, undoubtedly, unquestionably, surely and many others.

Another adverb that starts with R is rarely. This adverb comes from adjective rare, which means that something doesn’t occur very often.

According to that, adverb rarely is telling us that something is happening seldom and without frequency.

For example, we can say: “She is talking rarely about her own feelings”, which means that she doesn’t talk often about her feelings.

She may be avoiding it for some reason and she is talking about her feelings only sometimes.

However, adverb rarely can also mean that something was done in a really good or remarkable manner.

In this case adverb rarely could be used with the meaning “exceptionally”.

Take a look at the examples: “He wrote rarely interesting poems” or “He is rarely a good doctor in this town.” 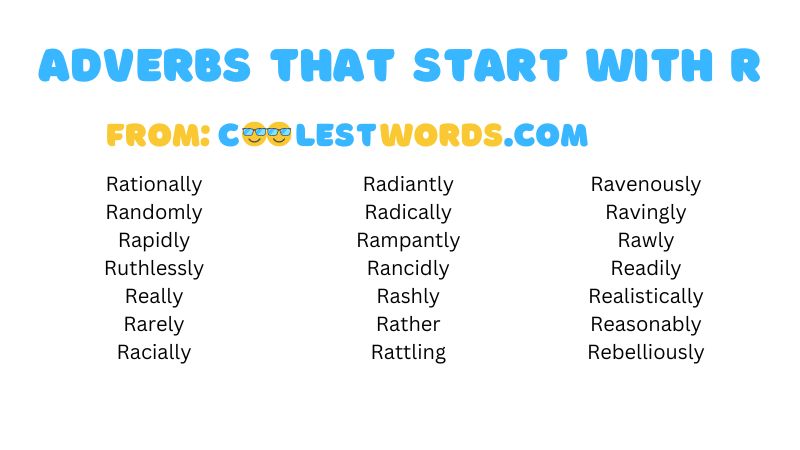 Other Adverbs Starting With R