As you probably already know, adverbs are words that more closely describe a verb.

They actually determine a verb by telling us how something was done, at what time it was done, in what place, etc.

Adverbs can also give us a closer look at the situation in which something is happening, as well as a degree of a certain action.

Adverbs are present in speech every day and that is why it is important to know how to use them correctly.

In this article we will talk about adverbs that start with the letter X.

The first thing we want to tell you is that there are not many adverbs in the English language that start with this letter.

More precisely, there are very few of them and they mostly refer to some professional spheres of our lives.

Adverbs that start with X in English language usually have something to do with medicine, chemistry, physics and other, mostly natural sciences.

However, in this article we will mention some of those adverbs and we will try to explain their use and meaning to you.

If you’ve ever heard the words xenophobically and xenogenetically, for example, you probably don’t know what those words mean.

In this article we will deal with exactly those words and we will tell you in what context they can be used.

We will also mention a few more adverbs that start with the letter X and we will explain you in more detail how to use them correctly.

The Most Common Adverbs that Start With the Letter X

One of the adverbs starting with the letter X is xenophobically. This adverb means that something was done in a xenophobic way.

In order to understand the meaning of adverb xenophobically, you have to know first what xenophobia means.

Xenophobia is an anxiety or fear of people who come from other countries.

Also, we can say that xenophobia represents intolerance or prejudice against strangers.

According to that, we can say that adverb xenophobically determines something that was done in a way that include hatred or fear towards people from other countries.

We can give you an example that can help you understand the meaning of the adverb xenophobically.

“He was thinking xenophobically and always came into conflict with the strangers that he met”, which means that he was afraid of strangers or he simply hated them.

These are the signs of xenophobia that we already mentioned.

We can give you one more example with adverb xenophobically: “You should not look at people xenophobically, but you should respect the member of every nation in the same way.”

We hope that now you can understand better what adverb xenophobically means and in which context you can use this adverb.

The next adverb that we have prepared for you is xenomorphically. It is probably the adverb that you haven’t heard of yet.

Of course, to understand its meaning you must first know what a xenomorph means.

A xenomorph is a being that deviates from the normal and usual in its form and appearance.

For example, we can say that aliens are xenomorphic beings.

A xenomorph is actually an alien type that comes from the science-fiction movies.

Suffix –morph is always associated with the shape of something, while –xeno means that something is strange and different from something usual.

According to all those facts that we have mentioned, we can say that xenomorphically means that something was done in an unusual way.

Something is done or viewed in a way that implies strange and deformed shapes.

There is an example that can help you understand the use of this adverb: “Due to their strange and deformed appearance compared to human beings, aliens are xenomorphically viewed beings.”

A xenobiotic is actually a substance that is foreign to our body. It can be some kind of a drug or pesticide, for example.

Also, xenobiotics can be some environmental pollutants, antioxidants or drugs.

In fact, xenobiotics are all substances that are present in the human body in large amounts and that are not produced in the organism, so they represent foreign bodies.

If we take that fact into account, we can say that xenobiotics can sometimes be antibiotics and other drugs that are taken in larger quantities.

As we have said, xenobiotics always refer to something that is foreign to organism.

We should keep that in mind when we mention the adverb xenobiotically.

We can give you an example that can help you see clearly the meaning and the use of adverb xenobiotically.

“Considering the fact that various drugs act xenobiotically if we take them in large quantities, they can cause poisoning of the organism and many other serious consequences as well.”

There is one more adverb that starts with the letter X and it is also used in professional purposes, which means that it is not the word that we use every day.

In order to understand what the adverb xenogenetically can mean, we have to explain first the meaning of the adjective xenogenetic.

The adverb xenogenetically comes from this adjective and it is telling us that something was done in a xenogenetic way.

“Xenogenetically, it is possible to perform a transplant from an animal to a human.”

This is an example that can help you understand in what context you can use this adverb, but as we have said, you will not use this adverb in your everyday speech.

Adverb xenogenetically is mostly used in medicine and similar areas.

Another adverb that starts with the letter X is xerothermally.

If you are not good in chemistry and similar natural sciences, then you probably have never heard of this adverb or any word related to it.

Xerothermally is an adverb that is commonly used in chemistry. Its meaning is always associated with dryness and heat.

This adverb usually refers to something that is adapted to hot and dry places.

Below you will see one example that can be useful for you and it can help you see how to use this adverb in sentences.

“Xerothermally adapted areas are the best for growing this type of shrub, because these bushes thrive best in dry and warm areas.”

If something is adapted xerothermally, it means that it must have high temperatures and it must be dry. 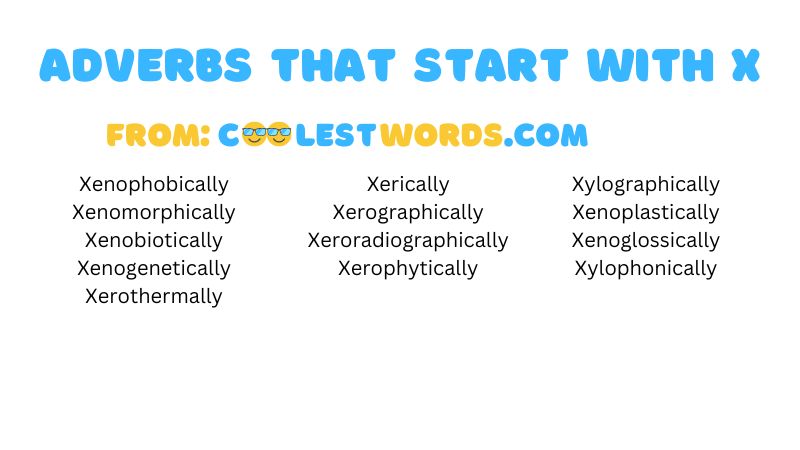 Other Adverbs Starting With X

As you could see in this article, there are not many adverbs in the English language that start with the letter X.

We have mentioned some of the adverbs that start with this letter and we have explained you their meanings.

We have also given you examples that can help you understand better what certain adverbs mean and how they are used in sentences.

We hope that we have managed to bring you at least a little closer to the adverbs that begin with the letter X, although they are all professional and they are used mainly for professional purposes.