Adverbs That Start With Z

This text will be about the adverbs that start with the letter Z.

These adverbs are quite rare and there are not many of them.

Nevertheless, we managed to choose several interesting adverbs that start with the letter Z and we will try to explain their use in sentences.

We will tell you what each of these adverbs can mean and in what context it is used.

You may not have heard of most of these adverbs, but we will try to explain them to you in the best possible way.

The Most Common Adverbs That Start With the Letter Z

We will start from the adverb zigzag that probably sounds familiar to you.

Actually, zigzag is a word that can be a noun, an adjective, an adverb or a verb.

Therefore, the form of this word is the same in all these cases.

Of course, based on the context of the sentence itself, you can figure out what kind of word it is.

We will show you the difference between these four uses of the same grammatical form, in order to see how to distinguish the adverb zigzag from other zigzag words.

Zigzag as a noun: “He was running in zigzags around the house.”

“She bought a skirt with blue zigzags on it.”

Zigzag as an adjective: “I bought a dress with a zigzag pattern.”

In this sentence zigzag is an adjective and it describes what the pattern on a dress was like.

Zigzag as a verb: “He went zigzagging down the street.”

“The river is zigzagging through the city.”

As you can see, in these cases we can see that zigzag is used as a verb.

Zigzag as an adverb: “Birds were flying zigzag in the sky.”

In this example zigzag is used as an adverb and we will talk precisely about this use of the word zigzag.

You have seen that zigzag can be used as an adjective, an adverb, a noun or as a verb. As we have said, we will focus on the adverb zigzag.

The adverb zigzag is used to describe the way in which something has been done.

Actually, it is telling us that something was done in a zigzag pattern or in a zigzag manner.

We will give you some more examples in order to understand better the use of the adverb zigzag:

“The child was going zigzag along the street.” It means that the child was following the line that was made of sharp and short angles.

“He was driving zigzag all the time”, which means that he was following the zigzag line all the time.

In all those example zigzag is used as an adverb and it is telling us that something is done in a zigzag manner.

Another adverb that is starting with the letter Z is zingily. This adverb means that something is done in a zingy manner.

The most common synonyms of the adverb zingily are: lively, cheerfully, brightly, gladsomely, etc.

“He jumped zingily and everyone looked at him at that moment.” It means that he jumped lively and with excitement.

The adverb zingily is comparable, which means that its comparative is “more zingily” and its superlative is “most zingily”.

The next adverb that starts with the letter Z is zoologically. This adverb indicates that something is related to animals.

Actually, it is telling us that something is occurring in a zoological manner.

“Zoologically speaking, this type of tiger is more dangerous than any other type of wild cat.”

There is one more adverb that starts with the letter Z. It is the adverb zoomorphically that is usually used in biology and other natural sciences and disciplines.

The adverb zoomorphically comes originally from the adjective “zoomorphic”.

In order to understand the meaning of this adverb, you have to know first what the adjective zoomorphic means.

The adjective zoomorphic is always related to something that looks like an animal.

Actually, this adjective is used to describe something that has the form and the shape of an animal.

According to that, we can say that the adverb zoomorphically is telling us that something is done in a way that is associated with animals or with something that looks like an animal.

We are going to give you now a couple of examples that will help you see how to use the adverb zoomorphically in sentences.

Actually, they can be made as humans that have animal heads, for example.

Anyway, those figures are made to look like animals or to have some body parts like animals.

“I have always liked sculptures that are made zoomorphically”, which means that the sculptures made in the form of an animal are very interesting to me.

The adverb zonally is also one of the adverbs that start with the letter Z. As its name says, this adverb has something to do with zones.

Actually, it is telling us that something was done in a way that is related to zones. This adverb comes from the adjective “zonal”.

We are going to give you some examples in order to understand better the use of this adverb.

There is also another sentence that can be used:

“The zonally calculated temperature will determine the further course of work.”

This means that the temperature must be measured in different zones to determine the further course of work.

This is one of the adverbs that are commonly used in biology. This adverb indicates that something exists as a zygot or it is related to it.

For example, we can say: “He deals with the study of zygotically created embryos.”

As we said, zygotically is a term used in biology and it can denote an embryo that is formed by the union of an egg cell and a sperm cell.

Adverb zestily is used often to tell that something is done with zest, which means that it is done with pleasure and delight.

“They played zestily in the competition and they managed to win”, which means that they played with a lot of zest, swing and pleasure.

“They danced zestilly and amazed the audience with their talent.” It means that they danced energetically and enthusiastically.

It is also interesting to know that the adverb zestily can be related to food. This adverb is actually used to describe that certain food has a strong and spicy flavour.

In this context we can say: “They seasoned the sauce zestily, so we have to drink a lot of water after the lunch.”

It means that the sauce was very spicy and that’s why we were thirsty.

The most usual synonym of the adverb zestily is “zestfully”. 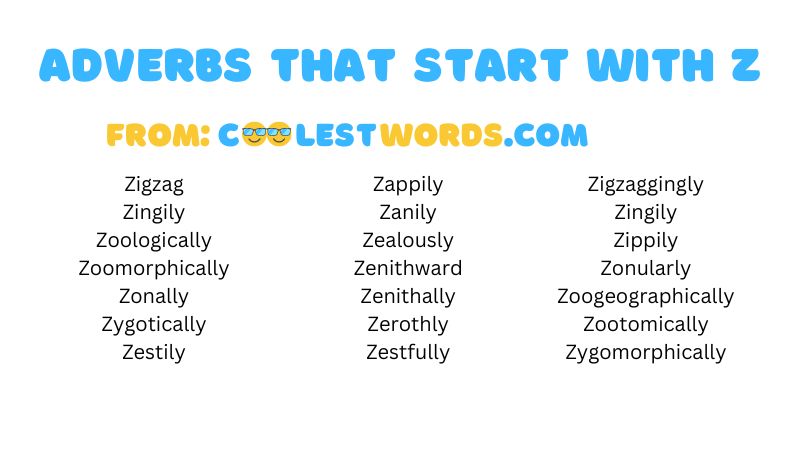 Other Adverbs Starting With Z