The human body consists of many different body parts: our 206 bones, 650 muscles, and 78 organs aren’t even all there is to us!

Considering that fact, it’s no wonder we can name tons of human body parts only beginning with the letter E!

Here, we’ll discuss this topic in detail by providing you with a comprehensive list of the most common body parts that start with E.

So, without any further ado, let’s get right to the bottom of it!

The most common body parts beginning with E

Human ears are small, but incredibly complex parts of the human body.

Together with our brains, they provide us with the wonderful ability to hear everything around us.

Certain parts of the ear are also responsible for balance and motion, which makes them even more important in our daily lives.

Generally speaking, we can separate the ear into three different parts: the inner ear, the middle ear, and the outer ear.

The inner ear is connected to the brain and is responsible for both hearing and balance.

The middle and the outer ear are responsible for receiving and sending signals to the inner ear from where they get sent to the brain.

As we’ve already mentioned before, ears are extraordinarily complex parts of our body that consist of different nerves, canals, organs, and even a couple of bones!

Every single part of the ear is interconnected, so it can easily be viewed as a separate system of its own.

We could spend pages upon pages just explaining the cochlea, so if you want to learn more about your ears, feel free to do your own research – there’s plenty of information online.

It’s often said that the eyes are the window to the soul.

While we’re not sure about that, we can certainly say that our eyes act as our windows to the outside world.

They allow us to see our surroundings and are an essential part of our everyday lives.

The anatomy of our eyes is quite complex. This small organ consists of many different parts, including the pupil, cornea, sclera, lens, iris, retina, and many more.

Each and every part of the eye has its role to play in helping us see as clearly as possible.

Human eyes come in a variety of different colors and shades, which is closely related to our genetics.

If both of your parents have blue eyes, you’re more likely to inherit them.

The most common eye color in the world is brown.

It’s estimated that nearly half of the human population has brown eyes, which can also be in different shades depending on your genes.

Either way, the human eyes are one of the most complex parts of our body beginning with C, which is why we decided to include them in this list.

Another body part closely related to our eyesight is our eyelashes.

These small portions of hair are located just above the eyes, acting as protection from harmful particles that we come in contact with every day.

As you probably already know, our eyes are incredibly sensitive.

A small number of bacteria can lead to serious infections that can cause us to lose our eyesight.

The eye itself has its mechanisms to clear itself out, but our eyelashes certainly help prevent harmful particles from entering our system.

While they’re not a vital part of our body, they’re still there for a reason – their role shouldn’t be underestimated.

Besides that, in most cultures, eyelashes are associated with beauty and femininity.

This is the reason why many people all around the world wear makeup and eyelash extensions.

The enhancement of the volume and the length of the eyelashes is one of the most popular beauty trends in many parts of the world nowadays.

Still, as we’ve mentioned before, your eyelashes are much more than a beauty asset – they play an important role in keeping your eyes healthy and protected.

The outer layer of your skin is called the epidermis.

It’s the layer that we can see and touch, and it plays several roles in our daily lives.

First of all, the epidermis layer of the skin protects our body from external harm.

Without it, our most vital organs and systems would be exposed to a wide range of dangers of the outside world.

Besides that, the epidermis is responsible for keeping the rest of our skin hydrated and healthy.

Additionally, it’s connected to certain receptors in our brain that allow us to feel the sensations of touch, helping us maneuver through whatever surrounds us.

It also contains melanin, which determines the color of our skin.

So, epidermis quite literally means “outer skin”, which is exactly what it is.

Besides the epidermis layer, human skin also has two additional layers called the dermis and hypodermis.

All of these layers have their roles to play and are equally as important. Still, since the epidermis is the only part starting with E, it’s the only one we’ll feature on this list.

Each and every bone in our body has its role to play in helping us move as freely and comfortably as possible.

Besides that, our endoskeleton provides our internal organs with the necessary support and protection.

Many of our vital organs, such as our lungs, wouldn’t be able to function properly without the help of our endoskeleton.

The major parts of the human skeleton include the skull, pectoral girdle, pelvic girdle, ribs, vertebra, sternum, and many more.

Of course, besides bones, our endoskeleton also has a large number of joints and cartilage.

Since our skeleton isn’t visible on the outside, it’s characterized as an endoskeleton (-endo means “inner”).

Some other species, such as crabs, have an exoskeleton instead.

Our elbows are extremely important joints that help us move our arms as freely as possible.

They consist of three different bones: the humerus, ulna, and radius.

All the nerves that are located in our arm travel through the elbow, which is just one of the reasons why this region of the arm is crucial.

As we already mentioned above, our elbows provide our arms with additional functionalities and allow us to move our arms in multiple directions.

As such, their importance shouldn’t be underestimated.

The word elbow itself has a very interesting etymology.

It comes from Middle English “elbowe”, which was derived from two words: ell, meaning forearm, and bow, which is a weapon used for shooting arrows.

The word is also used as a verb – “to elbow someone out” means to push another person with your elbows in an aggressive manner to make more space for yourself.

Either way, it’s one of the most interesting parts of the human body starting with E, so we just had to put it on our list.

Enzymes are a natural part of our body.

They’re responsible for speeding up the natural chemical reactions occurring inside our bodies.

This is also called metabolism.

Without enzymes, our bodies wouldn’t be able to function properly.

They’re extremely important for our digestive system, as well as for the function of our kidneys and livers.

Besides humans, every other living being has enzymes.

They help break down molecules, so living beings can use them to get the necessary energy to survive.

As such, they play a crucial role in our everyday lives.

Without them, life as we know it would simply be unimaginable, or rather, completely impossible.

The female egg cell, scientifically known as the ovum, is a crucial part of the female reproductive system.

They’re produced in the ovaries and are essential to the process of procreation.

Once they come in contact with spermatozoids, they get fertilized, and new life starts to develop.

Every woman is born with all the egg cells she’ll produce during her lifetime.

While in the womb, a woman has around 6 million cells.

By the time she’s born, this number goes down to one million.

Once she hits puberty, this number gets even smaller – an average adult woman has around 300,000 egg cells.

Overall, without the female egg cells, we wouldn’t be able to create new life.

As such, they’re one of the most important parts of the human body starting with E. 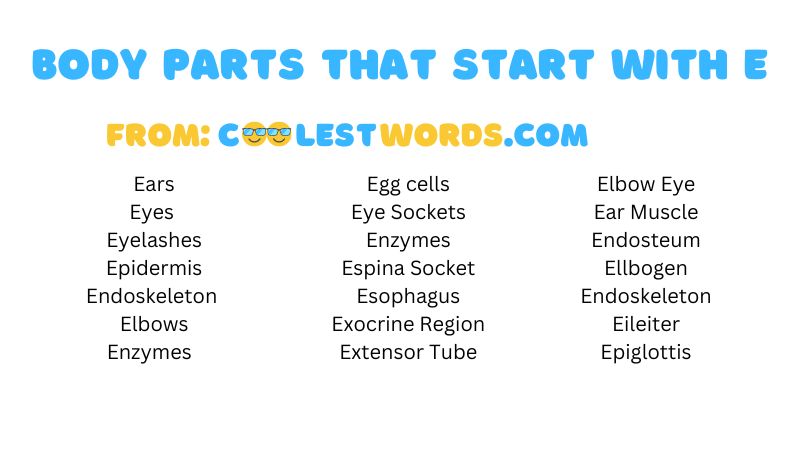 Other body parts starting with E