Body Parts That Start With R

The human body is an intricate and complex system, and the body parts that begin with the letter “R” play a crucial role in its functioning.

From the rectus abdominis muscle to the renal vein, the body parts that start with “R” are essential for maintaining proper movement, circulation, and overall health.

The Most Common Body Parts That Start With R

The renal vein is vital for filtering blood and maintaining proper blood pressure, electrolyte balance, and fluid balance in the body.

This vein is formed by the union of the segmental veins that drain the renal parenchyma.

It is usually divided into two branches: the anterior and the posterior renal.

The rib is a long, curved bone in the human body’s thorax (chest) region.

There are 12 ribs in total, with the first seven pairs attached to the sternum (breastbone) in front and the last five connected to the vertebral column in the back.

The ribs provide structural support for the chest and protect the organs in the thorax, such as the lungs and heart.

They also play an essential role in breathing, as the ribs’ movement helps expand and contract the lungs.

The retina is the innermost layer of the eye responsible for sensing light and converting it into electrical impulses sent to the brain.

The retina also contains other specialized cells, such as bipolar cells and ganglion cells, which help to transmit the electrical signals generated by the rods and cones to the brain.

The retina contains a small area called the macula, which is responsible for central vision or the ability to see fine details.

Red blood cells, also known as erythrocytes, are the most common type of blood cell in the human body.

Red blood cells are biconcave, disc-shaped cells that are flexible and have no nuclei, thus allowing them to squeeze through small blood vessels and effectively deliver oxygen throughout the body.

They are also rich in protein called hemoglobin, which binds to oxygen and gives red blood cells their characteristic red color.

Red blood cells are produced in the bone marrow and have a lifespan of about 120 days, after which they are removed from circulation by the spleen and liver.

The body constantly makes new red blood cells to replace the ones removed.

Anemia, a condition in which the body doesn’t have enough red blood cells, can cause fatigue, weakness, and other symptoms.

The radius is one of the two bones in the forearm, located on the thumb side of the arm.

It is the shorter and more lateral of the two bones and runs parallel to the ulna, the other bone in the forearm.

The radius allows the hand to rotate and twist and supports the wrist and hand in various movements.

The distal end of the radius has a disc-like structure called the radial head that articulates with the ulna at the elbow and allows for forearm rotation.

The radius also has bony prominences, such as the radial styloid and the radial tuberosity, which serve as attachment points for muscles and tendons.

Injuries to the radius can occur from fractures, dislocations, or strains, resulting in pain, swelling, and difficulty moving the arm or wrist.

The rib cage is the bony structure that surrounds and protects the thoracic (chest) organs, such as the lungs, heart, and great vessels.

It comprises 12 pairs of ribs, the sternum (breastbone), and the thoracic vertebrae.

Instead, they are only attached to the thoracic vertebrae in the back.

This allows the ribcage to move when breathing, as the ribs move up and down with the diaphragm, allowing the lungs to expand and contract.

The ribcage also protects the organs by providing a physical barrier that can absorb forces, such as blows to the chest.

The ribcage also has several essential muscles and tendons that attach to it and assist in breathing, posture, and movement.

The ring finger is the fourth digit on the hand, located between the middle and little fingers.

It is the most common finger to wear a ring, hence its name. The ring finger is also known as the digitus medicinalis or digitus annularis.

The ring finger is generally the most flexible of all the fingers.

It is also the most commonly used finger in delicate motor tasks such as writing, playing musical instruments, and tying shoelaces.

The muscles and tendons that move the ring finger are located in the hand and forearm.

In addition, the direction of the ring finger is governed by the ulnar nerve and the ulnar artery.

The rotula, or patella, is a small bone located on the anterior (front) of the knee joint.

It is a triangular-shaped bone that acts as a protective shield for the knee joint and helps to increase the leverage of the quadriceps muscles (muscles located in the front of the thigh) as they extend the knee.

The patella is connected to the thigh bone (femur) and the shin bone (tibia) by ligaments, and it moves up and down as the knee is bent or straightened.

It is a crucial structure for knee stability, movement, and weight bearing.

The rectum is the last portion of the large intestine, located between the sigmoid colon and the anus.

The rectum’s primary function is to store feces (waste material) before they are eliminated from the body through the anus.

The rectum is a muscular tube lined with mucous membrane, which is about 12-15 cm long in adults and has several critical physiological functions, including the ability to sense the presence of feces and generate the urge to defecate.

It also has several essential muscles and sphincters that help to control the passage of feces and maintain continence.

The rectum can be affected by several conditions, such as hemorrhoids, diverticulitis, and inflammatory bowel disease.

In addition, the rhomboids connect the spine to the scapula (shoulder blade) and help to hold the scapula against the thorax, allowing for a stable base for shoulder movement.

The rhomboid major is the more considerable muscle that runs from the thoracic vertebrae to the medial border of the scapula.

In contrast, the rhomboid minor is a smaller muscle that runs from the cervical vertebrae to the medial border of the scapula.

The respiratory system is the body system responsible for breathing, which is the process of moving air in and out of the lungs.

The main organs of the respiratory system are the nose, mouth, trachea, bronchi, and lungs.

Air enters the body through the nose or the mouth, then travels down the pharynx and larynx (throat) into the trachea (windpipe).

The trachea then splits into two bronchi which enter the lungs, one for each lung.

Next, the bronchi break into smaller branches called bronchioles, eventually leading to the alveoli.

The alveoli are tiny air sacs in the lungs where gas exchange occurs between the air and the blood.

Oxygen from the air is absorbed into the blood, and carbon dioxide, a waste product of metabolism, is exhaled.

The respiratory system also includes the diaphragm, a muscle located at the base of the lungs that helps to expand and contract the lungs during breathing.

In addition, the respiratory system is regulated by the medulla oblongata, a part of the brainstem which controls the rate and depth of breathing.

The respiratory system can be affected by several conditions, such as asthma, bronchitis, and lung cancer, which can cause difficulty breathing, chest pain, and coughing.

The renal system, which includes the kidneys, ureters, and bladder, also starts with the letter “R.”

The kidneys are responsible for filtering waste products from the blood and regulating the balance of fluids and electrolytes in the body. 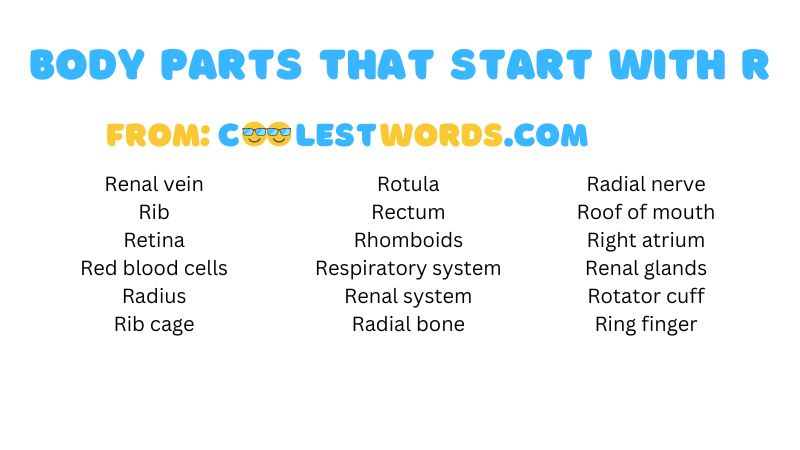 Other Body Parts That Start With R

Body Parts That Start With T