Body Parts That Start With T

The human body is an intricately designed and complex machine consisting of various parts that work together to ensure proper functioning.

Each body part plays a specific role in maintaining health and vitality, from the smallest cells to the most significant organs.

The Most Common Body Parts That Start With The Letter T

Teeth are small, complex, white structures in the mouth used for biting and chewing food.

They are made up of different layers, including the enamel (the hard, protective outer layer), dentin (the softer layer underneath the enamel), and the pulp (the innermost layer that contains nerves and blood vessels).

Therefore, taking care of your teeth by brushing, flossing, and visiting the dentist is essential.

The toes are the digits (fingers or toes) found in the foot of humans and many animals.

They are used for balance and movement, as well as for grasping and grasping objects.

Humans have five toes on each foot, the big toe (also known as the hallux) and four smaller toes.

Each toe comprises several small bones called phalanges, which are connected to the bones of the foot by joints.

Toes help in movement, balance, and weight-bearing while walking and running.

Injuries to the toes and conditions such as hammertoes and ingrown toenails can be common problems.

It can be treated by keeping proper hygiene, wearing comfortable shoes, and consulting the doctor if needed.

The tummy, also known as the abdomen, is the part of the body that contains the stomach, small intestine, colon, and other organs such as the liver, gallbladder, and pancreas.

The abdomen is between the thorax (chest) and the pelvis.

The muscles in the abdomen work together to help the body with movements such as bending, twisting, and lifting.

The tummy can be affected by various conditions, such as abdominal pain, bloating, constipation, diarrhea, and indigestion.

Maintaining a healthy diet, regular physical activity, and managing stress can help prevent or alleviate many of these conditions.

The throat is the part of the body that connects the mouth and the nose to the esophagus and the trachea. It is also known as the pharynx.

It is an integral part of the body’s respiratory and digestive systems.

It also contains the larynx, or voice box, responsible for producing sound during speech.

The tongue is a muscle in the mouth responsible for taste, speech, and swallowing.

The tongue is also responsible for helping shape speech sounds and is used to manipulate food in the mouth for chewing and swallowing.

The tongue is divided into different parts, such as the tip, the blade, the front, the back, and the root.

In addition, a healthy tongue should be pink, moist, and have small bumps.

Tissues are collections of similar cells that work together to perform specific bodily functions. There are four main types of tissues in the body:

Epithelial tissue lines the surfaces of organs and blood vessels and forms the skin. It helps to protect the body from physical and chemical damage.

Connective tissue supports and binds other tissues together. It includes bones, tendons, and ligaments.

Muscle tissue is responsible for movement, including food activity through the digestive system and blood pumping through the circulatory system.

Each tissue has a specific function and structure that allows it to perform its role in the body.

The body is made up of a complex network of different types of tissues working together to keep the body functioning correctly.

The thumb is the first digit of the hand in humans and other primates.

This feature allows the thumb to function as a grasping and manipulating digit, which is essential for holding tools, writing, and grasping objects.

The thumb comprises two bones, the distal phalanx and the proximal phalanx, which are connected by a joint called the carpometacarpal joint.

The muscles that control the thumb are located in the forearm and are responsible for the thumb’s movement and stability.

The thalamus is a large, almond-shaped structure in the brain’s center.

It acts as a relay station for sensory information, directing incoming signals from the senses to the right parts of the brain for processing.

The thalamus receives input from all purposes except for smell and then sends that information to the appropriate areas of the cerebral cortex for further processing.

The thalamus also plays a role in regulating sleep, consciousness, and attention.

Therefore, damage to the thalamus can result in problems with sensation, movement, and consciousness.

It also regulates emotions and memory and maintains the normal sleep-wake cycle.

The thalamus is a complex structure with many different nuclei and functions, and ongoing research reveals new insights into its role in the brain.

Tendons are fibrous connective tissue that attaches muscles to bones.

They are responsible for transmitting the force generated by muscle contraction to the bones, allowing for body movement.

Tendons are made up of densely packed collagen fibers, which provide them with strength and elasticity.

They are found throughout the body, connecting muscles to bones in the limbs, hands, feet, and other areas.

In addition, tendons can be found at the ends of the muscles, where they attach to the bones at specific points called tendon insertion.

Tendons are designed to withstand great stress during muscle contraction, but they can become damaged due to overuse, injury, or degeneration.

Maintaining flexibility and strength in the muscles and tendons is crucial through regular exercise, stretching, and avoiding excessive repetitive motions.

The thyroid is a gland in the neck, just below Adam’s apple.

It produces hormones that regulate the body’s metabolism, which is the process by which the body converts food into energy.

The thyroid also produces calcitonin, a hormone that regulates calcium levels in the blood.

The pituitary gland regulates the thyroid gland, which produces a hormone called thyrotropin (TSH) that signals the thyroid to produce and release its hormones.

A negative feedback loop between the thyroid, the pituitary, and the hypothalamus controls the thyroid hormones.

The tonsils are two small, round masses of lymphoid tissue located at the back of the throat, one on each side.

They are part of the body’s immune system and help to fight off infections by producing white blood cells.

However, the tonsils are lined with small crevices called crypts, which can trap bacteria and other harmful particles.

As a result, they can become swollen and inflamed, a condition called tonsillitis, often caused by a viral or bacterial infection.

Tonsils can also become enlarged and cause difficulty breathing, swallowing and sleep apnea. This is called tonsillar hypertrophy.

Tonsils are also known to produce a type of white blood cell called B cells that help to produce antibodies to fight off infections.

However, as people age, the tonsils tend to shrink and become less active in producing B cells.

It is essential to remember that tonsils can become infected by harmful bacteria or viruses.

It is important to seek medical attention if you have symptoms of tonsillitis, such as sore throat, swollen tonsils, or difficulty swallowing.

Taste buds are small sensory structures located on the tongue, soft palate, and pharynx that are responsible for the sense of taste.

They are made up of taste receptor cells, specialized nerve cells that respond to different chemical compounds in food and send signals to the brain to create taste sensations.

Each taste bud responds to a specific set of chemicals, and different tastes activate different receptors on the taste cells.

Taste buds are constantly replaced and renewed, and the process takes about ten days to two weeks.

In addition, certain factors like aging, smoking, and medications can affect the taste buds, leading to changes in taste perception and loss of taste or smell.

It is important to note that taste is closely linked with the smell.

The smell of food also plays a role in how we perceive taste, and people with a loss of smell may also experience a loss of taste. 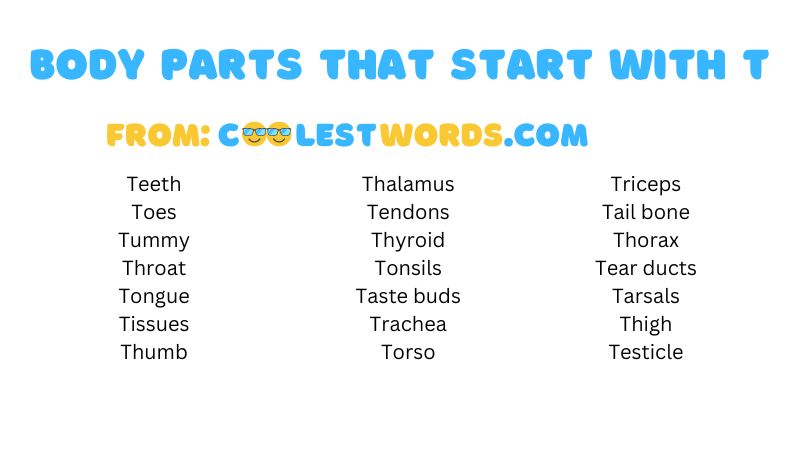 Other Body Parts That Start With T