According to many surveys and studies, Spanish is the language that sounds best and carries special emotions with itself.

This language is singable and favourite all over the world.

In this article we will talk about Spanish words that are particularly interesting and that are used in everyday speech.

We will introduce you some common Spanish words and we will also mention some words that are little known.

Of course, we will give you many examples in Spanish, so that you can understand the use of a certain word better.

If you love Spanish, you will certainly like this article and you will have the chance to learn many cool words that you haven’t heard of before.

Cool Nouns in the Spanish Language

This is one of the most popular and most frequently used words in the Spanish language. Translated into English, this word means “love”.

Amor is a word that, even when it is pronounced, sounds exotic and reflects emotions.

Like all other nouns in the Spanish language, the word love has a determined article which in this case is “el” because amor is a masculine noun.

In order to understand better the meaning of the word amor, we are going to give you the following example:

Apart from the fact that amor means love in a general sense, it is also often used as a nickname in love relationships.

Regardless of whether a man calls a woman “amor” or vice versa, the meaning of this word is the same.

Look at the following example in order to understand it better:

“Cásate conmigo, mi amor”, which means “Marry me, my love”.

We hope that now you can understand better the meaning and the use of the noun amor in the Spanish language.

This is a very interesting Spanish word that you can hear in many modern Spanish songs.

Literally, mamacita means “little mom”. However, the word mamacita is rarely used with that meaning.

In most cases, mamacita means “a hot mom” or it refers generally to an attractive and sexy woman.

Belleza is a Spanish noun that means “beauty” in the English language.

“Me conquistaste con tu belleza” – “You conquered me with your beauty.”

The next noun from the Spanish language that we are going to mention is the noun esperanza.

We can consider the following example: “No tengo esperanza”, which means “I have no hope.”

We can also say:

In addition to meaning “hope” in English, this noun can also be a proper name. In the Spanish-speaking world, there are many women with the name Esperanza.

This noun means “loneliness” and it is commonly used in the Spanish language.

We will give you an example:

“La soledad me está matando”, which means: “The loneliness is killing me.”

Like many other words in the Spanish language, the word soledad can be used as a proper name. In this context we can say that many women in Spain have the name Soledad.

This word is very popular in informal Spanish and it is used to denote a very good looking person.

We can say that someone is guapetón (male) or guapetona (female) if this person is handsome and beautiful.

We can say for example:

This is one of the most frequent compliments used in the Spanish language.

This is a word used in everyday speech to refer to a guy who often changes girlfriends. We can also say that ligón is someone who has a lot of girlfriends and who likes flirting.

If we take an example: “Tu hermano es un ligón”, a similar sentence in English could be “Your brother likes to flirt.”

Translated into English, the word ligón determines a guy who likes flirting and who is coquettish. It is usually a guy who has many girlfriends, as we have already said.

The next interesting word of the Spanish language is chiste and it means “a joke”.

In order to understand it better, you can see the next example:

As you probably know, padre is one of the most common words in Spanish and it means “father”. We can say for example:

It is the normal and literal meaning of the word padre that is used every day in the Spanish language.

However, you probably didn’t know that the word padre can also have a completely different meaning.

Actually, this word can mean that something is super or cool and in this context it is used as an adjective. You can see that in the example below:

“¡Este profesor es padre!”, which we can say in English: “This professor is cool.”

Another noun that sounds very cool and that is popular everywhere in the world is mojito. If you like going out with your friends and if you are a lover of night life, then you have certainly heard of mojito.

It is a Spanish word for the cocktail that is popular not only in Spain, but also in the rest of the world. This popular cocktail is made of mint, rum, soda, lime juice and sugar.

When it comes to the Spanish name mojito, we can tell you where it comes from. Actually, this word for the cocktail comes from the verb “mojar” that has the meaning of making something wet.

On the other side, we have the suffix –ito that determines something small or it is telling us that there is only a little of something.

If we take all it into account, we can translate the word mojito as “slightly wet”.

Cool Adjectives in the Spanish Language

This is a very common adjective in Spanish. Translated into English, this adjective means “drunk”.

Since the Spanish language has separate forms for both masculine and feminine genders, you can assume that the adjective borracho is typical for men, while borracha is used for women.

In order to understand this word, we are going to give you the following example:

In addition to being used as an adjective, the form borracho/borracha can also be used as a noun. In that context we will give you the next example:

Tranquilo is an adjective in the Spanish language that denotes a calm and quiet person.

We can say for example:

“Él es un chico tranquilo y sus padres están orgullosos de él.” – “He is a quiet boy and his parents are proud of him”.

Also, when you want to order someone to calm down, you can say use this word. Therefore, the adjective tranquilo can also be an imperative, as you can see in the following example:

This adjective is one of very cool words in the Spanish language. Translated to English, the adjective suave means “smooth”, “gentle” or “soft”.

We can see the meaning of the adjective suave in the following sentence:

However, the adjective suave can sometimes also mean cool, as you can see in the example below:

In this context the adjective suave has the meaning “cool”.

The adjective bárbaro in the Spanish language is very common and means “­barbarian” or “cruel”. You can see it in the example:

“Él es realmente bárbaro”, which means “He is really cruel”.

However, in addition to these negative meanings attached to the word bárbaro, it is interesting that it can be sometimes used in a positive context, especially when it is used in everyday speech.

In this sense, bárbaro can mean super, excellent or cool. This meaning of the adjective bárbaro is especially popular in Argentina.

“¿Te graduaste de dos universidades? ¡Qué bárbaro!” When we translate it into English, it means:

“Did you graduate from two universities? How cool!”

Another adjective that is commonly used in the Spanish language is loco/loca. This adjective is one of the most popular Spanish words.

Wherever you live in the world, you must have heard of the Spanish word loco. Of course, the grammatical form loco is used for males, while the form loca is used for females.

This word means “crazy” in English, that is, it refers to a person who is mentally ill. That is the most important meaning of the Spanish word loco.

Sometimes the adjective loco can refer to someone who is not crazy, but he/she is strange or weird in some way.

However, in Spanish, the word loco is also used in everyday speech and it can have positive meaning.

We are going to give you a good example that will help you understand this use of the adjective loco.

In English it would be: “You bought me 101 roses? You are really crazy!”

In this example you can see that the word loco is used in a positive context, to indicate how someone pleasantly surprised someone else.

The person who received the roses is surprised and happy and therefore uses the word loco in a positive sense, thus calling the person who brought her the roses.

Cool Adverbs in the Spanish Language

This is a very common adverb in Spanish and it has the meaning “gently”, “smoothly” or “softly.” You can see the use of this adverb in the example below:

This Spanish word sounds very cool, you have to admit it. In English this word has the meaning “regrettably” or “unfortunately.”

“Lamentablemente me arrastraron al mundo de las drogas”, which means “Unfortunately they dragged me into the world of drugs.”

As you can see, the adverb lamentablemente is used to say that someone regrets something that happened.

Cool Phrases In the Spanish Language

A phrase that is used every day in the Spanish language is definitely cállate.

This word comes from the verb callar (to be silent). Grammatically speaking, cállate is the second-person singular imperative that is combined with personal pronoun “te” (calla + te)

Translated into English, this phrase means “to be quiet” or “to shut up”.

A similar phrase is cállate la boca that means “shut your mouth” in English.

The phrase buena onda in Spanish indicates good vibes that are coming from someone or something.

This phrase is usually used for people who are decent and good by nature.

“Ella es buena onda”, which means “She is a good girl.”

Also, buena onda can be used to describe someone who is optimistic and who have a positive attitude in life.

However, when we say something like qué buena onda, it simply means “cool”. 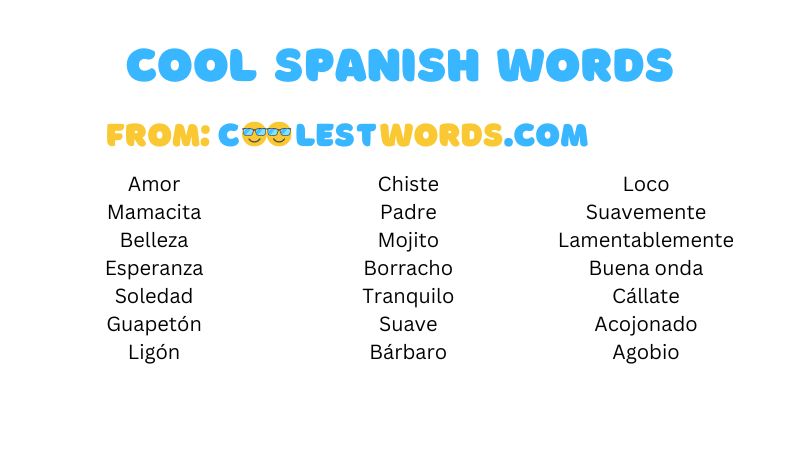 Other Cool Words in the Spanish Language

Bocazas – someone who has a big mouth

Paticorto – someone with short legs