Nouns That Start With G

Nouns are an essential part of language, as they define and identify people, places, things, and ideas.

From galaxies to gratitude, the letter ‘G’ plays host to various nouns that illustrate the diversity and complexity of the English language.

The Most Common Nouns That Start With The Letter G

A girl is a female child or young woman.

She is typically between infancy and adolescence, although the definition of a “girl” can vary depending on cultural and societal norms.

Girls usually undergo physical and emotional changes during puberty and may experience challenges related to self-esteem, body image, and relationships as they transition into adulthood.

A garden is an area of land, usually outdoors, set aside for cultivating plants, flowers, and other forms of vegetation.

They can be designed for pleasure, food production, or a combination.

In addition, gardens may be prepared for a specific purpose, such as for public display, scientific research, or enjoyment of a particular group of people.

Traditionally, gardens were considered a symbol of wealth and status and were used for aesthetic and practical purposes.

Goldfish is a freshwater fish in the family Cyprinidae of order Cypriniformes.

It is a small, brightly colored fish that is often kept as a pet or raised as a food source.

Goldfish are native to East Asia and have been widely introduced to other parts of the world for ornamental and food purposes.

They come in different varieties with different colors and shapes, such as the common goldfish, comet goldfish, shubunkin goldfish, and many more.

They are famous for their beauty, hardiness, and relatively low maintenance.

They can be kept in an aquarium or a pond and are known for their ability to adapt to various water conditions.

The average lifespan of a goldfish is about 10-15 years, but with proper care, it can live longer.

A greenhouse is a structure, usually made of glass or plastic, used to grow plants and flowers.

The primary purpose of a greenhouse is to create a controlled environment for plants by trapping heat and light inside to promote growth.

This is done by using materials that are transparent to light, such as glass or plastic, to cover the structure.

Greenhouses usually grow plants that require warm temperatures or protection from the elements, such as tropical plants or vegetables that are not well-suited to the local climate.

They can be in many sizes, from small hobby greenhouses to large commercial operations. Greenhouses are also used for research, education, seedling production, and plant propagation.

Grass is a common name for any plant in the family of Poaceae.

It is characterized by its narrow leaves, typically long and blade-like, and its stem, usually hollow.

Grass is one of the most abundant and widespread types of vegetation on Earth and is found in nearly every terrestrial habitat.

It is a vital component of many ecosystems, providing food and shelter for various animals. Humans also use grass in many ways, such as for food, medicine, and landscaping.

They are also used as feed for grazing animals and in the production of biofuels. The most common type of grass is lawn grass used in households, parks, and sports fields.

She is often essential in a child’s life, providing love, care, and guidance.

Grandmothers often have a special bond with their grandchildren and are known for their wisdom, experience, and nurturing nature.

They may help to take care of their grandchildren and are often involved in their upbringing, playing an essential role in their lives.

Grandmothers may pass on family traditions, tell stories, and share their knowledge and experiences with their grandchildren.

A gadget is a small tool or device with a specific function, often new or innovative.

It can refer to a wide range of devices, from simple, everyday items like kitchen utensils and hand-held tools, to more complex machines such as smartphones and computers.

Many gadgets are electronic or use technology in some way, such as personal digital assistants, smartwatches, and fitness trackers.

Gadgets can be found in many areas like household, sports, health, entertainment, etc.

They are often designed with portability and ease of use and are becoming increasingly popular due to their ability to perform multiple functions and connect to the internet.

Graduation is receiving a degree or diploma from a school, college, or university.

This involves a ceremony in which students are recognized for their academic achievements and are formally awarded their degrees or diploma.

Graduation marks the end of a student’s formal education at a particular institution and the beginning of the next phase in life.

A grape is a small, round fruit that grows in clusters on a vine.

Grapes come in various colors, including red, purple, green, and black, and can be eaten fresh or used to make wine, juice, jam, and jelly.

They are also dried to make raisins.

Grapes are a good source of vitamins, minerals, and antioxidants and have been linked to many health benefits, such as protecting against heart disease, cancer, and age-related cognitive decline.

Grapes are also used as a raw material for making wine, an alcoholic beverage made by fermenting grape juice.

A guest is a person who is invited to visit or stay with someone, usually in their home or at a special event.

A guest may be a family member, friend, colleague, or stranger and is often treated with hospitality and respect.

In the context of a hotel, a guest refers to someone who is staying at the hotel.

Guest in an event relates to a person invited to a gathering, ceremony, or celebration.

Guest can also refer to a person appearing on a radio or television program or in a performance or exhibition.

A ghost is a supernatural being or spirit of a deceased person that is believed to still exist in some form and is often thought to appear or manifest in the material world, typically in the form of a disembodied spirit or an apparition.

The belief in ghosts is found in many cultures and societies, and the concept of a ghost can take on many different forms, such as a spirit, poltergeist, or haunting.

Ghosts are often thought to be the souls of people who have died but have not yet moved on to an afterlife.

They can be depicted as either friendly or hostile, and in some cultures, it is believed that they can interact with the living and even cause harm.

However, it is essential to note that there is no scientific evidence to support the existence of ghosts.

Gratitude is a feeling of appreciation or gratitude for something someone has done or given.

It is a positive emotion associated with a sense of indebtedness or obligation to the person or thing that one is grateful for.

It is also a way of acknowledging the good things in one’s life. Gratitude can be expressed in many ways, such as through verbal or written thank-you notes, gestures of kindness, or prayer.

A gentleman is a man who is characterized by polite, courteous, and honorable behavior.

The term “gentleman” is often used to refer to men of a particular social class or status and is associated with qualities such as manners, education, and refinement.

A gentleman is considered polite, kind and well-mannered, respectful and courteous towards women and others, and is expected to behave in a respectable and dignified manner.

The term is also used in a more general sense to describe any man who displays these qualities regardless of his social status or as a polite or formal way of addressing a man, such as when managing a stranger or in a traditional setting.

Glamour is a style or appearance meant to impress and attract attention.

It is often associated with the world of fashion, film, and entertainment and is characterized by elegance, luxury, and beauty.

Glamour can refer to the style, beauty, and lifestyle of celebrities and the rich and famous and often includes items such as designer clothing, expensive jewelry, and high-end accessories.

In this sense, it can also be used as a verb (to glamorize), meaning to make something or someone looks more attractive or exciting than they are.

The word Glamour initially has a Scottish origin.

It was used to describe a spell or enchantment, often associated with a fox, that would make the person under it see things more appealingly, as if under a bit of fascination. 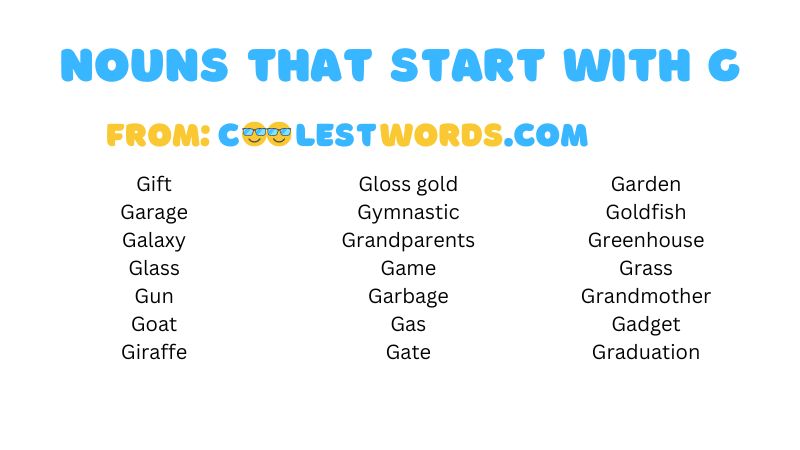 More Nouns That Start With G

Nouns That Start With C

Nouns That Start With B

Nouns That Start With E