A wide range of objects that play an important role in our daily lives starts with the letter B.

From bags that we use to carry our belongings, to boats that transport us across bodies of water, these objects represent the practical and essential aspects of our existence.

Objects such as brushes and books, while seemingly simple, have a profound impact on our culture and society.

From the practical utility of a bag to the cultural significance of a book, we will examine the diverse range of objects that the letter B represents.

The Most Common Objects And Things That Start With B

A ball is a round object that can be made of rubber, plastic, leather, and even metal.

People use it for sports and games, and many different types of balls are designed specifically for their intended purpose.

Some examples of balls used in sports include soccer balls, basketballs, footballs, baseballs, and tennis balls.

We use balls for non-sport activities such as juggling, playing catch, or for children’s toys.

In addition, balls are also used in various industrial and scientific applications, such as bearings in machinery, and in scientific experiments to study the properties of gravity and motion.

A bag is a container made of various materials such as cloth, paper, plastic, or leather, used for carrying items.

There are many different types of bags and are often used to hold items such as clothing, books, tools, or food.

They can be closed with a zipper, snap, or tie, and can have handles or straps to make them easy to carry.

Some bags are designed specifically for certain activities, such as sports bags, travel bags, or shopping bags.

A brush is a tool consisting of bristles, hair, or other material set into a handle, used for cleaning, grooming, or applying a substance.

There are many different types of brushes, each with its specific design and purpose.

A boat is a watercraft of any size designed to float, travel, and operate on water.

Boats can be powered by a variety of means such as wind, oars, sails, electricity, or an internal combustion engine.

They are used for many purposes such as transportation, recreation, fishing, or as a means of accessing other bodies of water.

Boats can be classified into several types, including rowboats, kayaks, canoes, motorboats, sailboats, and ships.

A belt is a strip of material, typically made of leather, fabric, or other durable materials, worn around the waist to hold up clothing, such as pants or skirts, or for decorative purposes.

Belts can be fastened with a buckle, snaps, or a Velcro closure.

They can also be used in certain types of industrial machinery, such as conveyor belts, which are used to transport materials in manufacturing and other industries.

In martial arts, a belt is worn around the waist to hold the uniform together and it is also used to indicate the rank of the practitioner.

A book is a collection of written or printed pages that are bound together and used for conveying information, stories, or other forms of content.

They can be published in different formats, such as hardcover, paperback, and e-books.

Hardcover books have sturdy covers and are often used for reference books, while paperback books are more affordable and portable.

E-books are digital versions of books that can be read on electronic devices such as tablets and smartphones.

Books have played a vital role in human history, they have been used for centuries to pass on knowledge, stories, and ideas.

They have been used for education, entertainment, and self-improvement.

They continue to be a valuable source of information and inspiration and can be enjoyed by people of all ages and backgrounds.

Balsam is a type of resin that comes from certain trees and shrubs, used for many medicinal and industrial purposes.

Some types of balsam are used to make perfumes and fragrances, while others are used in the production of varnishes and adhesives.

Balsam of Peru, a type of balsam that comes from a tree found in Central and South America, is used in traditional medicine to treat different conditions such as skin irritations, coughs, and colds.

People use balsam fir in Christmas decorations and aroma therapy.

Binoculars are a type of optical device that consists of two telescopes mounted side-by-side and aligned to point in the same direction.

They are used to magnify distant objects and make them appear closer and clearer.

Binoculars have two main components: the objective lens and the eyepiece.

The objective lens is at the front of the binoculars, which gathers light and forms an image.

The eyepiece, located at the back of the binoculars, magnifies the image formed by the objective lens.

Binoculars are used for many purposes such as bird watching, hunting, astronomy, and sports events. They are also commonly used by military and law enforcement personnel, as well as by boaters, hikers, and travelers.

A blender is a kitchen appliance used to mix, emulsify or puree food.

It consists of a blending container with a rotating blade at the bottom.

Blenders can have various sizes and designs, from small personal blenders to large, commercial-grade models.

They are used for a variety of tasks, such as blending fruits and vegetables for smoothies, pureeing soups and sauces, and emulsifying dressings and marinades.

This appliance is used for non-food-related tasks such as mixing paint, cosmetics, and even making soap.

When using a blender, it is important to be careful and follow the manufacturer’s instructions.

The blades of a blender are sharp and can be dangerous if handled improperly.

A bracelet is a piece of jewelry that is worn around the wrist. There are many different types of bracelets, each with its specific design and purpose.

From simple bangles to elaborate charm bracelets, they are a popular accessory worn by people of all ages and cultures.

They can be made of various materials and can be used to express personal style, represent memories or symbols, or even tell the time.

A bench is a long seat for several people, usually made of wood, metal, or concrete, and is often found in public spaces such as parks, gardens, and other outdoor areas.

They can also be found inside buildings, such as in waiting rooms, lobbies, and other public spaces.

Some benches have armrests and backs for added comfort, while others are simple and have no back or armrests.

Also,some benches have a storage space underneath the seat which can be used to store books, bags, or other items.

Benches are often used as a place to sit and rest, and they can also be used as a gathering place for people to socialize, wait for transportation, or enjoy the outdoors.

A bottle is a container made of glass or plastic, typically used for storing and transporting liquids such as water, soda, juice, or alcohol.

We can pack other items in bottles, such as medication or cleaning supplies.

Bottles are also used in laboratory and chemical contexts to store or transport different kinds of fluids and samples.

A bus is a large road vehicle designed to carry a large number of passengers.

Buses are usually used for public transportation, such as city buses, school buses, and intercity buses.

They can be classified by their size and style, such as single-decker, double-decker, articulated, or hybrid.

Some cities also have electric or hydrogen fuel cell-powered buses, which are more environmentally friendly.

A broom is a cleaning tool consisting of stiff fibers or bristles attached to a long handle.

It is used for sweeping floors, decks, patios, and sidewalks, and cleaning surfaces such as carpets, rugs, and upholstery.

Brooms can be made from a variety of materials such as straw, corn, plastic, and synthetic fibers and are commonly used in households, but they can also be used in industrial and commercial settings for cleaning large areas.

A blanket is a type of bedding that is used to keep a person warm while they sleep.

Blankets are usually made of a soft, warm material such as wool, cotton, fleece, or synthetic fibers.

They are commonly used on a bed or couch or taken with you when you are traveling or outdoors, or for decoration as well.

Some blankets are designed for specific uses, such as electric blankets for extra warmth, or weighted blankets for anxiety relief.

A building is a structure that is designed and built to house people, animals, or things.

Buildings can serve a variety of purposes, such as residential, commercial, industrial, or educational.

They can be constructed using a variety of materials, such as wood, brick, concrete, or steel, and can be of different architectural styles and designs.

Buildings can also be classified according to the number of stories, and by their age, such as single-story, multi-story and skyscraper buildings, historic or modern buildings.

A beeper, also known as a pager, is a small portable electronic device that receives and displays messages, typically consisting of a phone number.

Beepers were popular in the 1980s and 1990s as a way for people to receive phone calls and messages when they were away from their phones.

They were commonly used by doctors, nurses, and other medical professionals, as well as business people, who needed to be reached but couldn’t carry a phone with them.

Beepers work by receiving a signal from a base station or central office that then sends a specific signal to the beeper’s unique identification number, causing the device to emit a noise or vibration to alert the user that a message has been received.

The user would then call back the phone number or message sender to retrieve the message.

Beepers have largely been replaced by mobile phones and smartphones which have similar capabilities and more functionalities.

A basin is a bowl-shaped container used for holding water or other liquids, or for holding food or other items.

Basins are commonly used in bathrooms and kitchens for washing hands, dishes, and other items. They can be built into a countertop, or they can be freestanding.

In geology, a basin refers to a natural depression in the surface of the Earth, which can be filled with water or sediment.

Basins can also be found in gardens, parks, and other outdoor spaces as a decorative feature, often with water flowing through them, or to collect water run-off.

A battery is a device that stores and releases electrical energy, which can be used to power devices or machines.

It is typically composed of one or more cells, each of which contains an anode, a cathode, and an electrolyte.

When the anode and cathode are connected to a circuit, an electric current is generated as the electrons flow through the circuit.

A bandage is a piece of material used to cover and protect a wound or injury on the skin.

They are made of various materials, such as gauze or a flexible fabric, and come in different sizes and shapes to fit various body parts.

Some bandages also have a built-in adhesive to keep them in place.

A barograph is a type of instrument that is used to record changes in atmospheric pressure over time.

It consists of a pen or stylus that moves across a rotating drum of paper, which is wrapped around a cylindrical chamber.

The chamber is connected to the outside atmosphere through a tube, and as the pressure changes, the air in the chamber expands or contracts, moving the pen or stylus up or down the paper.

Barographs are used in meteorology, aviation, and other fields to track and predict changes in weather patterns, such as storms and high-pressure systems. 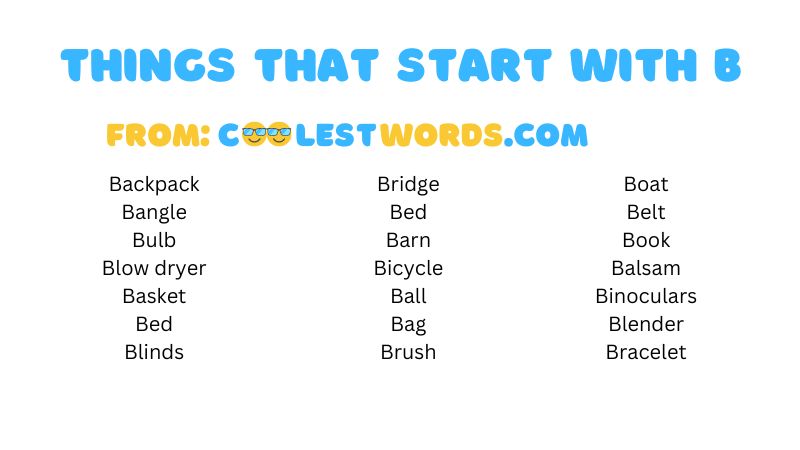 More Objects And Things That Start With B

Objects and Things That Starts With Letter W