Objects and things that start with the letter D are an important part of the English language and culture.

They play a significant role in our daily lives, from the furniture in our homes to the tools and technologies we use to make our lives easier.

A doll is a small, often humanoid figurine designed to resemble a human, animal, or mythical creature.

Dolls are playthings for children but they can also be used for decorative or collectible purposes.

Some dolls are even made to be poseable, with articulating joints that allow them to be positioned in different poses.

We can categorize them by their intended age group, such as baby dolls for young children, fashion dolls for older children and collectors, and collectible dolls for adults.

Dolls have been around for centuries, with the oldest known doll dating back to ancient Egypt.

Additionally, they might be used in therapy, education, and research in fields such as child development, sociology, and anthropology.

A device is a piece of equipment or machinery that is designed to perform a specific function or task.

Devices can be physical or digital and can vary in size, shape, and complexity. Examples of devices include:

Electronic devices such as smartphones, laptops, and tablets

Medical devices such as pacemakers, insulin pumps, and diagnostic equipment

Industrial devices such as machines used in manufacturing, construction, and agriculture

Home appliances such as refrigerators, washing machines, and vacuum cleaners

Transportation devices such as cars, airplanes, and trains

Security devices such as cameras, alarms, and locks

Communication devices such as radios, televisions, and telephones

The term “device” also refers to a software program or application designed to perform a specific function on a computer or mobile device.

In general, a device is something used to make a task easier or to make something possible that was not possible before. With the advancement of technology, many devices are becoming increasingly sophisticated and can perform a wide range of functions.

A desk is a piece of furniture with a flat or sloping surface used for writing, reading, or using a computer.

It often has drawers or compartments for storing supplies and may have a chair or stool for sitting at.

Desks can be made of different materials such as wood, metal, or glass, and come in a many sizes and styles.

They are commonly used in offices, classrooms, and homes for work or study purposes.

Diamonds are a type of gemstone composed of pure carbon and are valued for their beauty and rarity.

They are the hardest naturally occurring substance on Earth and are often used in jewelry such as rings, necklaces, and earrings.

The value of a diamond is determined by its cut, clarity, color, and carat weight.

They are mainly mined in Africa, Australia, and Russia. Synthetic diamonds, also known as lab-grown diamonds, have similar physical properties as natural diamonds but are created in a laboratory setting.

A die is a small, usually cube-shaped object that is used in many games, as well as in various other applications that involve random numbers.

Each face of the cube has some dots, or pips, that range from one to six, although there are also dice with other numbers of faces and pips.

Dice are usually made of plastic or other materials that are easy to roll, and they are used in games such as craps, backgammon, and many board games.

People use dice in many educational and scientific applications, such as probability experiments and simulations.

A door is a moveable barrier used to block off an entrance to or within an enclosed space, such as a building, room, or vehicle.

Doors can be hinged to swing in or out of the doorway or slide.

Some doors include locking mechanisms for security purposes, and others may include weather stripping to keep out drafts.

They play a very important role in the safety and security of any building, as well as in privacy and energy conservation.

Drums are musical instruments that produce sound when struck by a drumstick or other percussion mallet.

They are part of the percussion family of instruments and are found in many forms of music including rock, jazz, funk, and classical.

Some common types of drums include the snare drum, the bass drum, the tom-tom drum, and the cymbals.

Drummers use a combination of these drums to create rhythms and beats that drive the music forward.

Drums have been used for centuries in various cultures for ceremonial and religious purposes and continue to be a vital part of many musical traditions.

A desktop refers to the physical computer system, usually a personal computer (PC) that is designed to sit on a desk or table.

It consists of a central processing unit (CPU), a monitor, a keyboard, and a mouse.

It typically runs on an operating system such as Windows, macOS, or Linux, and can be used for a wide range of tasks such as browsing the internet, creating documents, playing games, and running software.

Desktop computers are generally more powerful than laptops or mobile devices and are often used in business, home, and educational settings.

They also can have a variety of form factors such as All-in-one, mini-tower, mid-tower, and more.

A drawer is a type of cabinet or container with a sliding tray that is used for storing and organizing items.

Drawers are often found in furniture such as desks, dressers, and chests.

They can have a variety of features such as dividers, compartments, and locks to help organize and secure the contents.

People use drawers to store a wide range of items such as clothing, tools, papers, and household items.

A drone, also known as an unmanned aerial vehicle (UAV), is a flying machine that can be controlled remotely or fly autonomously.

Drones can be of different sizes and designs, from small hobbyist drones to large military drones.

They can be powered by electricity or gasoline and are used for tasks such as aerial photography and videography, search and rescue operations, delivery of goods, and military operations.

Some drones are equipped with cameras and sensors that allow them to capture images, video, and data, while others are used for specific tasks such as crop dusting or package delivery.

Civilian drones are regulated by the FAA, and they have some limitations such as flying altitude, speed, and flight hours.

A diary is a book or notebook used for recording personal thoughts, feelings, and events daily.

It is a way to document one’s experiences, ideas, and reflections.

Diaries can come in different forms such as a bound book, a loose-leaf notebook, or an electronic device.

They can be used for personal growth, as a memory aid, or for creative writing.

A diary can be private or it can be shared with others. The content of a diary can vary, from a simple record of daily events to more detailed personal reflections and feelings.

Many people use their diaries as a therapeutic tool, to help process emotions and gain insight.

A dresser, also known as a chest of drawers, is a type of furniture used for storing and organizing clothes and other items.

It has several drawers of varying sizes, stacked one above the other.

They can be a standalone unit or part of a bedroom set.

Dressers are usually tall and wide, with a flat top that can be used as a surface for displaying decorative items such as lamps, vases, or picture frames.

They are commonly used in bedrooms to store clothing and accessories, as well as in other rooms for storing other items such as linens, toys, and tools.

A duster is a tool or cleaning implement used to remove dust, dirt, and other small particles from surfaces.

A duster has a handle or pole and a head that is covered in fibers that can trap dust and dirt. Some dusters are designed to be reusable and can be washed, while others are disposable.

They can be used to clean different surfaces such as furniture, shelves, blinds, and electronics. Dusting is an important step in maintaining a clean and healthy environment, as dust can contain allergens and irritants.

A decal, also known as a transfer or sticker, is a type of adhesive-backed graphic or design that can be applied to various surfaces.

They are usually made of vinyl and can be cut into different shapes and sizes.

Decals can be used for personalization or branding, in both personal and commercial settings.

There are different types of decals such as vinyl decals, wall decals, car decals, and window decals.

They can be applied to any smooth surface and they are a cost-effective way to add a personalized touch to any object.

A doorbell is an electric signaling device that is used to alert the occupants of a building when someone is at the front door or gate.

It consists of a button or switch, usually located near the entrance, that when pressed or activated, sends a signal to a chime or bell inside the building.

Doorbells can also be connected to an intercom or a camera system, allowing the person inside to see or talk to the person outside before opening the door.

Some doorbells have a built-in camera, and motion sensor, and can connect to a smartphone or tablet to alert the user when someone is at the door and allow them to see who it is even when not at home.

They are an essential element of any building and are used to signal the presence of visitors, in a way that is both polite and efficient.

A diode is a type of semiconductor device that allows current to flow in only one direction, from the anode to the cathode.

It is made of a semiconductor material such as silicon or germanium, with impurities added to create a p-n junction.

The p-n junction is the region where the semiconductor material changes from p-type to n-type. The anode is the p-type side and the cathode is the n-type side.

Diodes are used in many electronic devices and circuits, including power supplies, radios, televisions, and computers. They are used for rectification, switching, voltage regulation, and more. There are different types of diodes available, each with its characteristics and applications.

Dominoes are a popular game played with small rectangular tiles, also known as “dominoes,” that have dots, or pips, on them.

The pips on each domino typically range from zero to six, and the tiles are usually divided into two squares, showing a different number of pips.

The game is played by matching the pips on the tiles, to get rid of all of the tiles in one’s hand before the opponent.

Dominoes is a simple yet entertaining game that can be played by people of all ages and skill levels.

It can be played casually with friends and family or competitively in tournaments.

Dominoes is considered a classic game and it is played in many countries around the world.

With its simple rules, it is easy to learn, but offers endless possibilities for strategic play, making it a challenging and enjoyable game for players of all ages and skill levels. 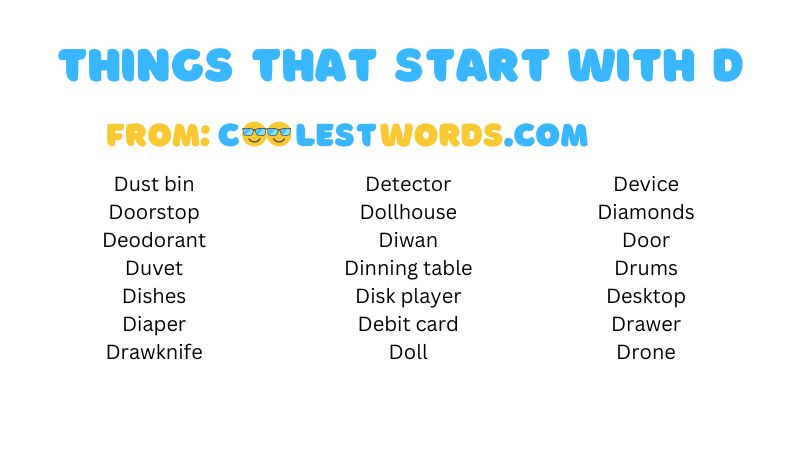 More Objects And Things That Start With D