Objects and Things That Starts With Letter F

The letter ‘F’ is a veritable treasure trove of items and concepts, from simple and functional to ornate and decorative.

With a range encompassing everything from a fork to a ferry, the letter ‘F’ highlights the diversity and utility of the items surrounding us.

The Most Common Objects And Things That Start with F

A flag is a fabric with a distinctive design, usually rectangular, used as a symbol or emblem, and often flown from a pole or mast.

Flags are used by countries, states, provinces, municipalities, and organizations to represent themselves and to show their identity.

Also, people use them to signal or communicate information, such as by ships at sea or by military units on land.

Furniture can be made from different materials, including metal, plastic, and wood, and can be designed for indoor or outdoor use.

People use furniture in homes, offices, and other places where they spend time, ranging from simple, functional pieces to decorative, ornate items.

The furniture style can also vary widely, from traditional to modern and contemporary.

A fireplace is an architectural feature that consists of a building made of brick, stone, or metal space in which a fire can be made.

Fireplaces are used for heating, cooking, and decorative purposes.

They can be found in various spaces, including homes, apartments, offices, and public buildings.

A chimney is built on top of the fireplace to vent smoke and other combustion by-products to the outside.

Fireplaces can be either traditional or modern and are fueled by wood, natural gas, propane, or electricity.

They are usually the focal point of a room and can be decorated and designed to match the style of the space.

A fork is a utensil consisting of a handle with several narrow tines on one end, used for picking up food to eat.

We use them as part of a place setting, along with a knife and spoon.

They are used to hold food while cutting with a knife and to bring food to the mouth.

Forks come in various sizes, shapes, and designs depending on the culture, occasion, and type of food they are intended to be used with.

In many cultures, forks were widely used in the 17th century and were considered a luxury item.

Nowadays, forks are used in most cultures and are common in households and restaurants.

A folder is a container for storing and organizing paper documents by grouping them into a single package.

Folders are often used in offices, schools, and homes to keep papers organized and easy to find.

They can have fasteners such as prongs, brads, or pockets to hold the papers in place, or they can be simple, flat sheets with no pins.

Folders can also include additional features, such as tabs or labels, to help identify and classify the contents.

A frame is a structure that surrounds and supports an object, such as a picture, a painting, a photograph, or a mirror.

It enhances the object’s visual appeal and protects it from damage.

Picture frames can be made of various materials, such as wood, metal, plastic, and glass and are usually decorated with different embellishments such as carvings, moldings, or gilding.

Frames can also refer to the structural or architectural elements that make up the skeleton of a building or a piece of machinery.

These frames are designed to support the weight of the building or machinery and provide stability.

A frame can also refer to a single complete image in a video or animation sequence.

A fridge, short for refrigerator, is an appliance that keeps food and drinks cool by removing heat from the interior and transferring it to the exterior.

Fridges are powered by electricity or gas.

They use a refrigeration system, which includes a compressor and a coolant, to maintain a temperature that is cool enough to slow down the growth of bacteria and other microorganisms that cause food to spoil.

Fridges are commonly used in households, restaurants, and other food service establishments to store perishable food and drinks and to keep them fresh for extended periods.

Some fridges come with a built-in freezer compartment for storing frozen food.

Foam is a substance that is made up of many tiny bubbles or cells, giving it a spongy texture.

It is made from various materials, including plastics, metals, and natural substances such as rubber, and can be used for many different purposes.

Foam is used in many industries, such as in packaging to protect fragile items, construction as insulation, furniture as cushioning, and sports equipment as protective padding.

It is also used in many consumer products, such as soap, shaving cream, and fire extinguishers.

There are different types of foam, such as polyurethane foam, memory foam, and closed-cell foam, each with its properties and uses.

Foam can also refer to the soapy substance that forms on top of liquids, such as beer or soap suds.

Fondue is a dish that originated in Switzerland, in which small pieces of food, such as meat, seafood, or bread, are dipped into a communal pot of hot, melted cheese or chocolate.

The pot is heated by a small burner and placed in the center of the table, allowing diners to cook and eat their food simultaneously.

Fondue can be made with different types of cheese, such as Gruyère, Emmental or raclette, or chocolate.

There are also oil-based fondues, known as “Fondue Bourguignonne,” where small pieces of meats are cooked in hot oil.

Traditionally, fondue is served with dipping sauces and side dishes such as pickles, boiled potatoes, and salad.

Fondue sets, which include a pot and long-handled forks for cooking and eating, are commonly used to serve fondue.

Fondue is considered a casual and communal dining experience and is often enjoyed as a party or holiday meal.

A flute is a musical instrument of the woodwind family.

It is a narrow, cylindrical tube that is open at one end and closed at the other.

The player blows air across a hole called the embouchure near the closed end to create sound. The flute has a distinct, clear, and sweet sound and is used in many musical genres, such as classical, jazz, folk, and pop music.

There are different flutes, such as the Western concert flute, the most common type, and other flutes from different cultures, such as the Native American flute, Chinese flute, and Indian flute (bansuri).

Flutes are made from different materials, such as wood, metal, glass, and plastic. The most common materials used to make flutes are silver, gold, and platinum for concert flutes and timber and bamboo for traditional flutes.

Flute playing requires a high level of skill and control of breath, and flute players must have a good embouchure, good finger technique, and reasonable breath control.

A ferry is a boat or ship used to transport people, vehicles, and cargo across a body of water.

Ferries usually operate on a regular schedule, and they can carry many passengers and vehicles at once.

They are often used to cross rivers, lakes, and coastal waters for sightseeing and recreational purposes.

Ferries can be powered by various means, such as diesel engines, electric motors, or sails, and are used as a means of transportation for people and goods between two points that are not connected by a bridge or a tunnel.

They can be used for short trips, such as crossing a river or a bay, or for longer voyages, such as traveling between islands or different countries.

Public or private operators can run ferry services, and the size and type of ferry will depend on the route, the volume of passengers and vehicles, and the water conditions.

Some ferries are small and can only carry a few cars and passengers, while others are large and can carry hundreds of vehicles and thousands of passengers.

Fleece is a fabric made from polyester or a blend of polyester and other fibers.

It is known for being warm, soft, and lightweight and is commonly used to make clothing and accessories such as jackets, pants, pullovers, hats, gloves, blankets, bedding, and other household items.

Fleece is made by a process called “air-jet spinning,” which creates a fabric with a unique texture. The fibers are brushed and combed to create a nap on one side, which provides insulation and warmth. The other side of the fabric is smooth.

It is also easy to care for and can be machine washed and dried. Fleece is famous for pet beds, as it is warm, soft, and easy to clean.

Fleece is a synthetic fabric that is not biodegradable, so that it can harm the environment.

However, some companies are now producing eco-friendly fleece from recycled plastic bottles.

A flashlight (or torch in British English) is a portable handheld device that produces a beam of light.

It consists of a small electric light bulb, a battery, and a switch and is used for illumination in dark or dimly-lit areas.

Flashlights can be powered by disposable or rechargeable batteries and have different light bulbs, such as incandescent, LED, or halogen. They can also have various features, such as adjustable focus, strobe mode, and different levels of brightness.

People use them in many professions, such as police officers, firefighters, security guards, and electricians, as well as for camping, hiking, hunting, and other outdoor activities.

Flashlights are also essential in power outages, emergencies, and household use.

In recent years, flashlights have been integrated into mobile phones and other portable electronic devices, providing an additional light source when needed.

Floss is a thin thread or cord made of nylon or other materials used to clean the spaces between teeth where a toothbrush cannot reach.

It removes plaque, food particles, and other debris that can accumulate between the teeth, leading to tooth decay and gum disease.

Flossing is an essential part of oral hygiene, and it is recommended that it be done at least once a day, ideally before bedtime.

To floss, the thread or cord is wrapped around the fingers, gently inserted between the teeth, and then moved up and down to clean the sides of the teeth and gums.

Different floss types are available, such as waxed and unwaxed, flavored and unflavored, and with different thicknesses.

Flossing regularly and effectively can help to prevent tooth decay, gum disease, and bad breath and can help to maintain overall oral health.

A floppy disk (sometimes called a floppy, diskette, or just disk) is a type of removable storage medium widely used to store, share and transfer small amounts of computer data.

It is called a “floppy” disk because it is a thin and flexible disk encased in a square plastic shell. The diskette is inserted into a floppy disk drive on a computer, and the computer’s disk controller reads and writes data on the disk.

Due to their limited storage capacity and the fact that they can easily be damaged or corrupted, floppy disks are now considered obsolete and are rarely used today. 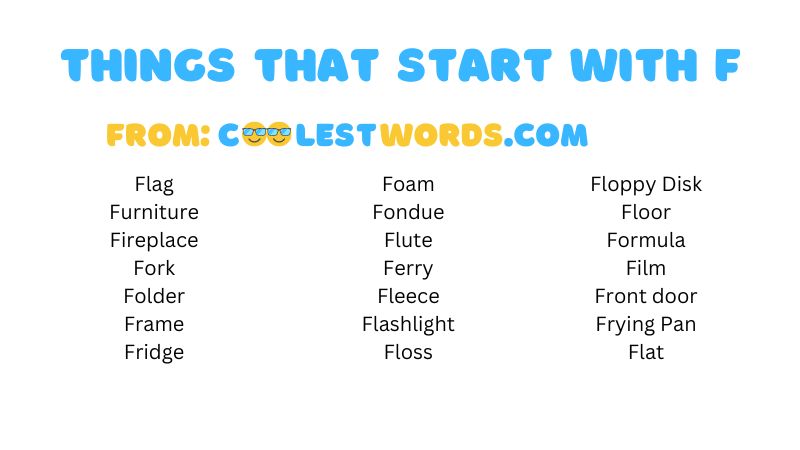 More Objects And Things That Start with F

Objects and Things That Starts With Letter C

Objects and Things That Starts With Letter E