The letter G holds a significant place in the English language, as it is the seventh letter of the alphabet and is used to represent a variety of words and concepts.

As we delve into the world of words and ideas starting with the letter G, we will discover a rich tapestry of concepts and topics that are integral to our understanding of the world around us.

A guitar is a stringed musical instrument played by plucking or strumming its strings with the fingers or a pick.

Guitars can be classified into several different types, including acoustic guitars and electric guitars.

Guitars are commonly used in a wide range of music genres, such as rock, folk, country, and jazz.

A globe is a spherical model of the Earth or other celestial body, usually made of plastic or paper on a metal or plastic frame.

Globes show the continents, countries, and oceans of the world, as well as other geographical features such as mountains, rivers, and lakes.

They can be used for educational or decorative purposes and come in different sizes and styles.

They also come in different types of representation such as political, physical, topographical, and many more.

Some globes even have built-in lights or can rotate to show different perspectives.

Gold is a chemical element with the symbol Au (from Latin: aurum) and atomic number 79, making it one of the higher atomic number elements that occur naturally.

It is a dense, soft, yellow, malleable, and ductile metal, with a bright luster.

Gold is a good conductor of heat and electricity, and does not tarnish or corrode easily.

It is also used in jewelry, as a store of value, and in a variety of industrial and decorative applications.

The price of gold is determined by the global gold market and can fluctuate depending on factors such as economic conditions and supply and demand.

Glass is a transparent or translucent material made by heating a mixture of silica, soda, and lime to a high temperature and then cooling it quickly.

It is an inorganic, amorphous solid that is hard, brittle, and can be formed into a variety of shapes.

Glass is used in a wide range of applications, including windows, mirrors, eyeglasses, bottles, jars, and many other household items.

It is commonly used in the construction industry for skylights, greenhouses, and other structures.

There are many different types of glass, such as tempered glass, laminated glass, low-emissivity glass, and others, each with unique properties and uses.

A game is an activity that is carried out for entertainment or fun and often involves one or more players.

There are many different types of games, including board games, card games, video games, sports, and more.

Games can be competitive or non-competitive and can have a set of rules or be more open-ended.

Some examples of games include chess, soccer, Monopoly, Super Mario, and Fortnite.

Many games have been used as a learning tool and a way to develop skills such as critical thinking, problem-solving, and teamwork.

A gummy bear is a small, chewy candy shaped like a bear.

The candy is made from sugar, glucose syrup, and gelatin, which gives it its gummy texture.

The gummy bear is a very popular confectionery in the world, it is known by different names in different countries, such as gummy bear, gummi bear, jelly bear, and so on.

The gummy bear was first made in Germany by Hans Riegel in the 1920s.

Since then, gummy bears have become a popular candy around the world and are a staple in many candy stores and supermarkets.

Ground refers to the solid surface of the Earth.

It is the surface on which we stand and walk and is made up of soil, rock, and other materials.

It can also refer to the surface of a body, such as the ground of a planet or moon.

In electrical engineering, a ground is a reference point in an electrical circuit from which voltages are measured.

The ground can be an actual connection to the Earth or it can be a virtual point with the same electrical potential as the Earth.

Grounds can also have different properties depending on the context.

In some contexts, the ground also refers to the lowest or most basic level or position, such as the “ground floor” or “ground state” of an atom.

A gift is an item or a thing given to someone without the expectation of receiving something in return.

Gifts can be given for many different reasons, such as birthdays, holidays, graduations, or other special occasions.

They can also be given as a token of appreciation, love, or friendship.

Gifts can be tangible items such as clothing, jewelry, or gadgets, or they can be intangible things such as a gift of time, a gift of service, or a gift of experience.

Gifts can be wrapped in packaging or presented in a gift box or a bag, and can often be accompanied by a card or note with a personal message.

It is a traditional way to express love and appreciation to others, and it can also be a social norm.

A grill is a cooking device that uses heat from charcoal, gas, or electricity to cook food.

It consists of a grated surface, usually made of metal, on which the food is placed and cooked by the heat source.

Grilling is a popular cooking method for meats, seafood, vegetables, and many other food items.

Grills can be either a stand-alone unit or can be built into outdoor kitchens.

Gas grills are powered by propane or natural gas, while charcoal grills use charcoal briquettes or lump charcoal as fuel.

Electric grills use electricity as a heat source and they can be used indoors and outdoors.

Grilling is usually associated with summer and outdoor activities but can be enjoyed year-round.

Gloves are a type of hand covering worn to protect or insulate the hands from cold, heat, or injury.

They can be made of leather, cloth, rubber, or plastic, and can be worn for a variety of purposes, including for warmth, safety, or as a fashion accessory.

Some gloves are also designed for specific activities, such as gardening, cooking, or sports.

Glue is a substance used to stick things together.

It is a liquid or semi-solid adhesive, which can be natural or synthetic, commonly used to bind or join materials together.

Glues can come in different forms such as liquid, paste, and powder, and can be applied in various ways such as brushing, spreading, or spraying

Some glues are waterproof, some are heat resistant and some are designed for a specific use such as food grade, medical use, or electronic use.

A gramophone is a device that plays recorded sound using a stylus (needle) that vibrates in response to the grooves on a rotating disc.

It was one of the first devices to play recorded sound and was popular in the early 20th century before being largely replaced by the phonograph and eventually the compact disc player.

A gate is a movable barrier that is used to block or allow passage through an opening in a fence, wall, or other barrier.

Gates can be made from various materials such as wood, iron, aluminum, steel, and plastic.

They can be used for many purposes, such as security, privacy, or decoration.

They can be manually operated or automated and can be controlled by a latch, lock, or electronic opener.

Gates are used in other settings such as ports, airports, or other secured areas where access control is important.

In these settings, there might be additional security measures such as cameras, intercoms, or security personnel.

In some cases gate could also refer to a passageway in a structure such as a dam or a bridge.

Goggles are a type of protective eyewear that cover the eyes and surrounding area to protect them from dust, debris, harmful liquids, and other hazards.

They are designed to provide a secure, tight fit and often include ventilation to prevent fogging.

Different types of goggles are available depending on their intended use, such as safety goggles, swim goggles, ski goggles, welding goggles, and night-vision goggles.

A grater is a kitchen tool used to shred, grate, or grind food items into small pieces.

It has a handle and a flat surface with raised ridges or holes of various sizes, which are used to shred or grind the food against.

A grater is a useful tool in the kitchen used to prepare different ingredients, such as cheese, vegetables, chocolate, and citrus fruits.

A guidebook is a book or booklet that provides information and instructions about a specific subject or location.

It is often used as a reference for travelers, hikers, and outdoor enthusiasts.

Guidebooks can be written by experts and can include practical tips, recommendations, and insider knowledge.

They can be used to plan a trip, find the best hiking trails, or learn more about a city’s history and culture.

Guidebooks can be found in both physical and digital formats.

A greenhouse is a building or structure used to grow plants.

It has walls and a roof made of transparent materials, such as glass or plastic, that allows sunlight to pass through and create a warm, humid environment for the plants inside.

Greenhouses are used to grow plants, including fruits, vegetables, flowers, and herbs, and can be used for both commercial and home gardening.

They can extend the growing season by protecting plants from extreme temperatures, wind, and pests, and can be used to grow plants that would not normally survive in the local climate.

A gym, short for a gymnasium, is a facility equipped for indoor physical exercise and sports.

Gyms also usually have facilities for group fitness classes, such as yoga, dance, and aerobics.

Many gyms also have a sauna, steam rooms, swimming pools, and other amenities.

Gyms can be commercial, such as health clubs or fitness centers, or they can be found in schools, universities, and community centers.

They may be open to the public or members only.

A griddle is a large, flat cooking surface used to cook food, such as pancakes, eggs, bacon, hamburgers, and sandwiches.

Some griddles have a ridged surface on one side, which gives food a grill-like texture and appearance. 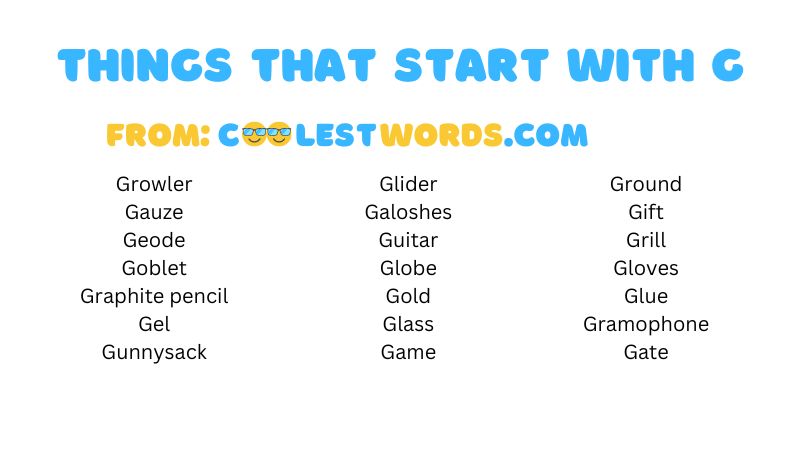 More Objects And Things That Start With G