Objects and Things That Starts With Letter H

The letter H holds a plethora of significance and significance in our daily lives, from the technology we use to the natural phenomena we study.

It encompasses many subjects that have shaped our understanding and advancement as a civilization.

A house is a building that is designed and built for people to live in.

It typically has a foundation, walls, a roof, and one or more rooms for sleeping, eating, and other activities.

Houses can be made of various materials, such as wood, brick, or concrete, and can come in many different styles and sizes.

People may own or rent a house, which can also be used for commercial or non-residential purposes.

A hat is a head covering worn for protection against the elements or as a fashion accessory.

Hats can be worn for functional reasons, such as protection from the sun, rain, and cold, or fashion purposes.

They can also be used as part of a uniform or as a symbol of authority or social status.

A hammer is a hand tool consisting of a handle and a head to strike and drive nails or other objects into a surface.

The head of a hammer is made of steel or another hard metal and is shaped with a flat striking surface on one side and a claw on the other.

The handle of a hammer is made of wood, plastic, or rubber.

Hammers are commonly used in construction, woodworking, and other tasks that require the driving of nails or other fasteners.

Different hammers are used for various purposes, such as framing hammers, claw hammers, sledgehammers, ball-peen hammers, and many more.

Headphones are listening device that covers or surrounds a person’s ears.

They allow the user to listen to audio from a device such as a smartphone, computer, or music player without disturbing others around them.

Headphones come in various styles, including over-ear, on-ear, and in-ear, and are connected to the audio source via a wired or wireless connection.

People use them for multiple purposes, such as music listening, gaming, watching videos, and taking calls.

In addition, different types of headphones are available such as noise-canceling, Bluetooth, wireless, and many more.

An hourglass is a timekeeping device that consists of two glass bulbs connected by a narrow neck.

The hourglass is filled with a material such as sand, which flows through the neck of the hourglass from the upper bulb to the lower bulb.

The time it takes for the sand to flow from the upper bulb to the lower bulb can be used to measure a specific amount of time.

Hourglasses were used as a timer in various applications, such as cooking, counting the duration of a speech or performance, and scientific experiments.

Nowadays, hourglasses are mainly used as decorative items or as conversation pieces.

A highlighter is a writing instrument that draws attention to important text or information on a page by making it stand out.

Highlighters have a transparent barrel and a felt tip filled with brightly colored ink or dye.

They can mark or highlight text in books, documents, or notes.

Highlighters come in various colors, such as yellow, pink, green, orange, blue, and purple, and can be used to color-code information or make certain words or phrases stand out.

Some highlighters have a clear barrel and can be used to underline text or to make notes or comments on the page.

A harp is a musical instrument with a triangular frame, and a series of strings stretched across the frame.

The lines are plucked or strummed to produce sound, and the pitch of the sound can be altered by pressing down on the strings with the fingers.

Harps are made from various materials such as wood, metal, or plastic.

They can be played solo, as an accompaniment, or in an ensemble.

The harp is one of the oldest musical instruments played in many different cultures and musical styles worldwide.

There are two main types of harps: the pedal harp and the lever harp.

The pedal harp is the largest and most complex of the harps, with pedals that change the pitch of the strings, and the lever harp, which is smaller and more portable, with levers that change the slope of the lines.

A horseshoe is a U-shaped metal plate fitted to the bottom of a horse’s hoof to protect it and provide extra traction.

The horseshoe is made of steel and held on the horse’s hoof by nails.

The use of horseshoes is thought to have originated in ancient times, and they have been used for centuries to protect horses’ hooves from wear and tear and to provide extra traction on slippery or uneven surfaces.

The horseshoe is a lucky symbol and is often used as a decorative element in many places.

A hairbrush is used to groom, style, and detangle hair.

It consists of a handle and a head with bristles or teeth.

The type of bristles or teeth on a hairbrush can vary and can be made from materials such as plastic, boar, or nylon.

Hairbrushes come in different shapes, sizes, and designs and can be used for different hair types and styles.

The type of brush you use will depend on your hair type, length, and style you’re trying to achieve.

Hairbrushes should be regularly cleaned to remove dirt and hair build-up and to maintain their effectiveness.

A hamper is a container or basket, usually made of wicker or other natural materials, used to hold and carry items.

For example, hampers are often used for laundry, holding dirty clothes, or carrying items such as food, linens, or other household items.

A hamper can also refer to a gift basket, a collection of things, such as food or personal care products, that is packaged and presented as a gift.

These hampers are often given as a present for special occasions such as birthdays, holidays or as a thank-you gift.

They can include various items like gourmet food, wine, a book, candles, or other items.

A hot air balloon is an aircraft that uses heated air to lift off the ground and fly.

It consists of a large, envelope-shaped bag made of nylon or other heat-resistant material filled with hot air to provide lift.

The envelope is suspended from a wicker basket or gondola, which carries the passengers and fuel.

The pilot controls the balloon’s altitude by adjusting the heat in the envelope using burners that burn propane fuel.

Hot air balloons are one of the oldest forms of flight and are often used for recreational and sporting activities, as well as for scientific research and advertising.

They are considered one of the safest forms of aviation. Hot air balloons can fly at different altitudes, and the experience of flying in a hot air balloon is often described as peaceful and serene.

A hut is a small, simple structure used for shelter or as a place to live.

Huts can be made from various materials, such as wood, mud, or thatch, and are minor and less permanent than a house.

They are often used by people who live in rural or remote areas and can be found in various settings such as forests, mountains, and along coastlines.

People use huts for different purposes, such as for shelter and storage and as a place to carry out specific activities such as fishing, hunting, or farming.

They can be made by the inhabitants of rural areas themselves or by professionals and can be designed to suit different climates, cultures, and traditions.

On the other hand, people use them as a vacation home, a place to escape the city, or a shelter while camping in the wilderness.

A hive is a structure used by honeybees to house their colony and store their honey.

It consists of a series of wooden boxes or frames stacked on top of one another, and the beekeeper can open it to access the honey and check the colony’s health.

There are several types of hives, including:

Langstroth hives – are the most common type of hive used by beekeepers. They consist of wooden boxes containing frames for the bees to build their comb.

Top-bar hives have sloping roofs and a horizontal bar for the bees to build their comb.

Warre hives are similar to top-bar hives but have vertical frames for the bees to build their comb.

Flow hives have a unique design that allows beekeepers to harvest honey without disturbing the bees.

Hives are used for honey production, pollination, or scientific research.

The beekeeper is responsible for maintaining the hives, protecting the bees from predators, parasites, and diseases, and harvesting the honey when the time is right.

Hairspray is a cosmetic product used to hold hair in place and style it.

It is applied to the hair as a fine mist and used on wet and dry hair.

Hairspray can style and hold hair in various hairstyles, such as curls, waves, and updos.

Some hairsprays have added ingredients such as sunscreen, conditioners, or fragrances. Hairspray should be used in moderation, as too much can make the hair stiff and difficult to style and cause build-up on the hair and scalp.

A hula hoop is a circular toy made of plastic or lightweight material.

It is about the size of a person’s waist and is spun around the core, arms, legs, and other body parts by twirling the hips in a circular motion.

Hula hoops were first invented in the 1950s and became popular in the United States and other countries.

They are used for recreational activities and as a form of exercise.

Hooping is considered a low-impact cardio workout and can help to tone the core and other muscle groups.

Hula hoops can also be used for performances and competitions, often by dancers and performers, to create a visual spectacle.

Nowadays, hula hoops come in different sizes, weights, and materials and can also be illuminated or decorated with LED lights, glow-in-the-dark tape, or other materials.

A helicopter is a type of aircraft that uses rotors to generate lift and propulsion.

Unlike fixed-wing aircraft, which rely on wings to create lift, helicopters can take off and land vertically and hover in midair, making them highly versatile and helpful for various applications, including transportation, search and rescue, and military operations.

Helicopters are also commonly used in emergency medical services and for aerial photography and survey.

Due to the complexity of flying a helicopter, it requires specialized training for pilots.

A hinge is a mechanical device that connects two objects, allowing them to rotate relative to each other about a fixed axis.

Hinges are commonly used in doors, gates, lids, and other applications where one object must swing or rotate open and closed.

There are different types of hinges, such as butt, continuous, and pivot.

The hinge plays a critical role in the functionality of many structures and devices.

Its invention has allowed the development of many complex machines and architectural designs. 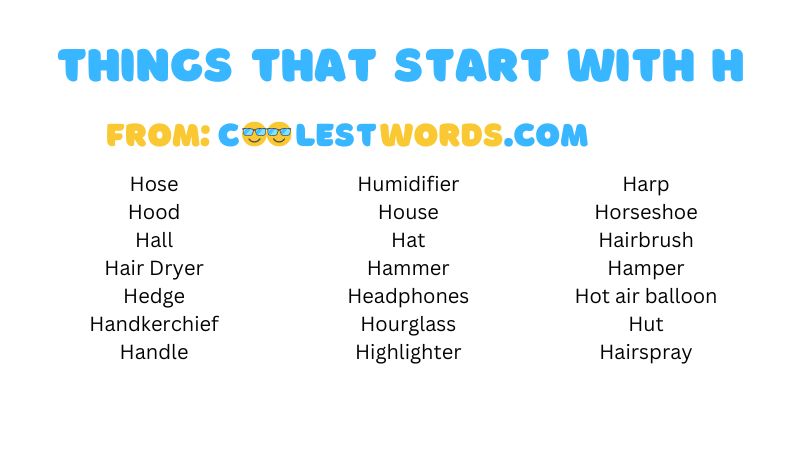 More Objects And Things That Start With H

Objects and Things That Starts With Letter E