From ultrasound technology to the universe and everything in between, the letter ‘U’ encompasses a wide range of fascinating and important concepts that play a vital role in our daily lives.

An umbrella is a portable canopy that is used to protect a person from rain, sun, or wind.

It has a central pole and a canopy made of fabric or other waterproof material that is supported by ribs that radiate out from the pole.

The canopy can be opened and closed using a mechanism such as a manual button or automatic switch, which allows the user to easily open and close the umbrella when the weather changes.

Umbrellas come in a variety of sizes and styles, from small, compact versions that can be easily carried in a purse or bag, to larger versions that are designed to provide shade for multiple people.

They also come in different colors, patterns, and materials.

Umbrellas have been in use for thousands of years and were first invented in ancient Egypt, China, and Greece, where they were used as a status symbol and protection from the sun.

Today, the umbrella is an everyday item that can be seen in many places and cultures around the world.

A unicycle is a single-wheeled vehicle that is powered by the rider’s pedaling. Unlike a bicycle, which has two wheels, a unicycle only has one wheel, which is located in the center of the frame.

The rider sits on a seat that is attached to the frame and uses their legs to pedal the wheel to move forward or backward.

Unicycling requires a high level of skill and balance, and it can take some time to learn how to ride.

Beginners usually start with a smaller wheel, which is easier to control, and progress to larger wheels as they become more comfortable and confident on the unicycle.

Unicycling has become a popular performance and circus art, where riders will perform a variety of tricks such as riding on one wheel, riding on a tight rope, jumping, and riding on different terrains.

Unicycles come in different wheel sizes and types, some of them are geared for off-road, mountain, and street riding, and some are built for the circus and performing arts.

Unicycling is a relative niche activity and not as widely used as a mode of transportation.

However, it is a fun and challenging form of exercise and can be enjoyed by people of all ages and skill levels.

A uniform is a set of clothing worn by members of an organization while participating in that organization’s activity.

Uniforms are worn by armed forces and paramilitary organizations such as police, emergency services, security guards, schools, and by inmates in prisons.

Clothing for factory workers, janitors, and others may also be referred to as a uniform. In some countries, it is also a requirement for schoolchildren to wear uniforms.

These uniforms can be designed to make the person wearing them easily identifiable as a member of a particular group and may have symbolic significance.

The term can also refer to a dress code, which is a set of guidelines for appropriate clothing worn by members of an organization.

Upholstery is the material used to cover and fill the padding of furniture, especially seating.

It includes the fabric or leather coverings, the padding, and the webbing or springs that provide support.

The process of upholstering is the art and craft of covering furniture with fabric or leather, and padding it to provide a comfortable surface to sit on.

Upholstered furniture is often used in living rooms, bedrooms, and other common areas of a home.

It can also be used in vehicles, boats, airplanes, and other forms of transportation.

Upholstery can be done professionally or as a DIY project, it is an important part of the furniture-making process, making the furniture more comfortable and visually appealing.

An Ulster is a type of overcoat that is typically made from a heavy fabric such as wool and is characterized by its long length and the presence of a cape or a collar.

The Ulster coat is often worn in cold or wet weather and is typically associated with the region of Ulster in Ireland.

The coat is also known as an “Ulster overcoat” or an “Ulster coat”, The Ulster is a distinct style of coat, it was originally worn by farmers and countrymen in the 19th century, but it has also been used by the British Army and other military organizations.

The Ulster coat is still worn today, although it has become less common in recent years.

Upstage is the area of the stage, in the theater, that is furthest from the audience.

The opposite of the upstage is the downstage, which is closest to the audience.

Actors will often move upstage to indicate a location change or to create distance between themselves and the other actors on stage.

In a play, the upstage area is often used to represent a different location or to create a sense of depth on the stage.

An urn is a container, typically made of metal, ceramic, or glass, that is used to hold the ashes of a person who has been cremated.

Urns can be made in various sizes, shapes, and designs, Some are intended for burial, while others are meant to be kept in a home or columbarium as a memorial.

In some cultures, urns are used to hold the remains of loved ones who have passed away and are kept in a special place, such as a columbarium, a mausoleum, or a special room in a home.

Some urns are also used for other purposes, for example, in gardens, as a decorative element, as a container for liquids, or even as vases.

In literature and art, an urn is often depicted as a container for the ashes of the dead or as an object of reverence.

The undercarriage refers to the bottom part of a vehicle, such as an airplane, train, car, or truck.

It includes the wheels, axles, suspension system, and other components that support the weight of the vehicle and allow it to move over the ground.

In an airplane, the undercarriage includes the landing gear, which are the wheels and struts that support the weight of the plane when it is on the ground.

It also includes a braking system, which allows the pilot to slow down and stop the plane after landing.

In a car or truck, the undercarriage includes the suspension system, which consists of shocks, struts, and other components that absorb bumps and vibrations from the road. It also includes the exhaust system, which carries away the waste gases produced by the engine, and the drivetrain, which transmits power from the engine to the wheels.

The undercarriage of a vehicle is often exposed to the elements and can be prone to rust and corrosion. Regular inspections and maintenance of the undercarriage are important to ensure the safety and longevity of the vehicle.

A unit is a standard measurement of a particular quantity or amount.

Units are used to express the size, weight, volume, or other characteristics of an object or substance.

Some common units of measurement include:

Units of measurement are standardized across different countries, regions, and industries, to ensure consistency and accuracy when measuring or expressing quantities.

The International System of Units (SI) is the most widely used system of units in the world and is based on the units of mass, length, electric current, time, amount of substance, luminous intensity, and thermodynamic temperature.

In addition to physical measurements, a unit can also refer to a single item or a group of items that are considered together, such as a single apartment in a building, a single car in a fleet, or a single machine in a factory.

A unitard is a one-piece garment that covers the entire body, including the legs and torso, similar to a leotard, but with long legs like a pair of tights or leggings.

Unitards are often worn by gymnasts, dancers, and acrobats, as they provide freedom of movement and a sleek, streamlined appearance.

They can be made from various materials such as spandex, nylon, or cotton. They can be worn by men and women and come in various colors and styles.

Unitards can also be worn by performers in theater or circus, they are used to create a unique look, or to make the body appear elongated or distorted.

They can also be worn by athletes for sports that require flexibility and freedom of movement.

Unitards can be worn as a fashion statement, and have been seen on the runway and in streetwear.

They can be worn with or without additional clothing or accessories and can be dressed up or down depending on the occasion.

In general, a unitard is a versatile piece of clothing that can be used for various purposes, including performance, sports, and fashion.

An underframe is a structural framework or chassis that supports the body of a vehicle, such as a train, truck, or trailer.

The underframe is made of steel or aluminum and is designed to support the weight of the vehicle, as well as to provide a stable foundation for the wheels and other components of the vehicle.

In a train, the underframe is the assembly of beams and girders that are located beneath the floor of the train car and supports the weight of the car body.

It also includes the trucks (wheelsets and axles) which are the components that support the weight of the car and allow it to move along the tracks.

In a truck or trailer, the underframe is the structure that supports the load-bearing components such as the axles, suspension, and wheels.

It also includes the cross members, frame rails, and other structural components that provide strength and stability to the vehicle.

The underframe of a vehicle is an important component that must be designed and built to withstand the loads and stresses of operation and to ensure the safety and longevity of the vehicle.

An unblocker is a tool or service that allows users to bypass internet censorship or access blocked websites or content.

However, it is important to note that the use of unblockers may be illegal in certain countries or jurisdictions, and may be against the terms of service of some websites.

It refers to any object or light observed in the sky that cannot be identified or explained by the observer.

UFOs have been reported by people throughout history and across many cultures, but the vast majority of sightings can be explained as natural phenomena or man-made objects.

The military and intelligence agencies have often conducted investigations into UFO sightings, but none have been conclusively proven to be of extraterrestrial origin.

The study of UFOs is called ufology. Some ufologists study the physical evidence of UFO sightings, such as photographs and videos, while others study the psychological and social aspects of UFO encounters.

However, the majority of the scientific community does not take the study of UFOs seriously, as there is no concrete evidence to support the existence of extraterrestrial spacecraft visiting Earth. 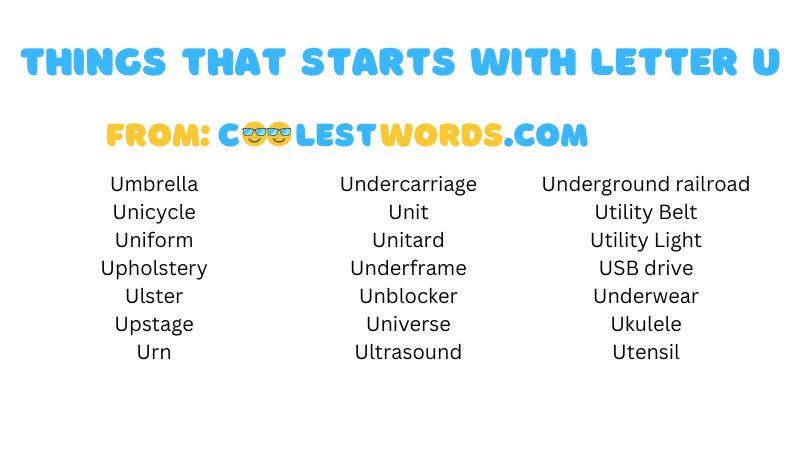 More objects and things that start with the letter U

Objects and Things That Starts With Letter A