Many things and objects start with the letter ‘V’ and each of them plays an important role in our daily lives.

A vase is a decorative container, often made of ceramic, glass, or metal, used for holding flowers or other decorative objects.

Vases come in a wide variety of shapes, sizes, and styles, and can be used for both functional and aesthetic purposes.

Some vases are designed to hold a single flower, while others can hold a bouquet.

Vases have been used for thousands of years, and have been made by many different cultures, including ancient Egyptians, Greeks, and Romans.

A violin is a stringed musical instrument that is played with a bow. It has four strings that are tuned to the notes G, D, A, and E.

The violin is played by holding it between the shoulder and chin and moving the bow back and forth across the strings.

The sound is produced by the vibrations of the strings, which are amplified by the hollow body of the violin.

The violin is used in a wide variety of musical genres, including classical, folk, and pop music. It is considered one of the most important instruments in the orchestral string family.

A vacuum cleaner is a device that uses suction to remove dirt, dust, and debris from surfaces such as floors, carpets, and upholstery.

It consists of a motor that generates suction, a filter to trap particles, and one or more attachments for cleaning different surfaces.

Vacuum cleaners come in various types such as upright, canister, stick, and handheld, each with its own set of features and capabilities.

They are widely used in households and commercial buildings to maintain cleanliness and improve indoor air quality.

A vacuum cleaner works by creating a suction that pulls dirt and debris through a hose and into a collection container or bag, where it is trapped until the bag is emptied or the container is cleaned.

A valise (or suitcase) is a piece of luggage used for carrying clothes, personal items, and other possessions while traveling.

It usually has a handle and is made of materials such as fabric, leather, or plastic.

Some valises also have wheels and retractable handles for easy transportation.

A vestibule is an entrance area or room, typically located at the front of a building, that serves as a transition space between the exterior and interior of the building.

It can also be defined as a small room or hall leading to the main room of a house or building.

Vestibules are often used to remove outdoor clothing and footwear before entering the main living area and can also provide an additional layer of security.

Velvet is a type of soft, plush fabric that is made from silk, cotton, or synthetic fibers and has a short, dense pile on one side.

It is known for its smooth and plush texture, as well as its rich, deep colors.

It’s often used for clothing and upholstery, especially in formal and luxury settings.

Velvet can also be used as an adjective to describe something that has a soft, plush texture or appearance, such as velvet-covered furniture or velvet-lined boxes.

For example: “She wore a velvet dress to the party.”

“The walls of the room were covered in velvet.”

“The velvet couch was inviting to sit on.”

Vaseline is a brand name for a type of petroleum jelly, a semi-solid mixture of hydrocarbons that is primarily used as a lubricant and a moisturizer.

It is usually used to protect against minor burns, cuts, and other skin irritations.

Because it forms a water-repellent barrier on the skin, it is used to prevent chapped skin, diaper rash, and other minor skin irritations.

It can be applied directly to the skin or mixed with other ingredients to make ointments or lotions.

For example: “She applied a thin layer of Vaseline on her lips to moisturize them.”

“He used Vaseline to lubricate the gears of his bike.”

“Vaseline is a key ingredient in many hair care products.”

A vaporizer is a device that is used to release the active ingredients of a substance, such as herbs or essential oils, in the form of vapor, which can be inhaled.

A vaporizer works by heating the substance to a temperature that is below its boiling point so that the active ingredients are released as vapor without the substance catching fire.

This is considered a healthier and more efficient way to consume herbs and essential oils as compared to traditional methods like smoking, as it reduces the number of harmful substances inhaled.

For example: “He used a vaporizer to inhale the essential oils for aromatherapy.”

“She purchased a desktop vaporizer for her dry herb.”

Vanity refers to the excessive or undue concern with one’s appearance, attractiveness, or public image, often to the point of being vain or self-absorbed.

It also refers to the state or quality of being vain. It can be seen as a lack of humility or a sense of self-importance.

In the context of furniture, a vanity refers to a dressing table or a piece of furniture with a mirror and a storage space for cosmetics and personal grooming items.

For example: “Her vanity knew no bounds as she spent hours getting ready for the party.”

“He was so full of vanity that he would only associate with people who were as good-looking as he was.”

“The vanity in her bathroom was where she did her hair and makeup.”

“The vanity table was cluttered with makeup and beauty products.”

A van is a type of vehicle that is similar to a truck or a minibus but has a lower roofline and is used for transporting goods or people.

Vans are often used for commercial purposes, such as by delivery companies, tradespeople, or as a shuttle bus.

They come in various sizes and configurations, with many featuring side and rear doors that can be opened to make loading and unloading easier.

Some vans are also used as recreational vehicles, often known as camper vans, which are equipped with basic living facilities to allow people to travel and camp in comfort.

For example: “The delivery van arrived with a package for her.”

“He drove a white van that was used for his plumbing business.”

“The camper van was perfect for their road trip.”

“The company uses a fleet of vans to transport its employees.”

A visor is a piece of equipment that is worn over the eyes and face, typically to protect from the sun, wind, or other elements.

Visors are often worn as part of a hat or helmet, but can also be worn separately.

Visors can come in different styles and materials, including plastic, fabric, or mesh. They can also be tinted or polarized to reduce glare.

In some sports, such as baseball, a visor is worn by players to shield their eyes from the sun while they play.

For example: “He wore a visor while playing golf to keep the sun out of his eyes.”

“She put on a visor before going for a run to protect her face from the sun.”

“The football player wore a visor to protect his eyes from the glare of the stadium lights.”

“The visor on her helmet provided additional protection for her face.”

Vinyl records, also known as phonograph records or simply records, are a type of analog audio storage medium that was widely used from the 1930s to the 1980s.

They consist of a flat disc made of vinyl, with spiral grooves cut into the surface that carries the audio information.

The audio is played back using a stylus, or needle, that rides in the grooves and vibrates, creating sound waves that are amplified by a phonograph or record player.

Vinyl records have a warm and rich sound quality, and they have experienced a resurgence in popularity in recent years as a result of the renewed interest in analog audio.

Vinyl records are also considered collectible items by many music enthusiasts and can be found in second-hand record stores or online.

For example: “He has a large collection of vinyl records.”

“Vinyl records have a unique sound quality that can’t be replicated by digital formats.”

“The band’s new album is being released on vinyl as well as digital formats.”

Valuables are items of intrinsic or sentimental value that are typically kept in a safe place or worn for protection.

Examples of valuables include precious metals and gemstones, jewelry, art, antiques, collectibles, and documents of important personal or financial value.

Valuables are often kept in a safe or a safe deposit box for protection from theft or damage, and they may be insured against loss.

Valuables are also items of sentimental value, such as family heirlooms or photographs, that have a personal significance and are therefore considered to be valuable.

For example: “He kept his valuables in a safe at home.”

“She had a valuable collection of antique vases.”

“The valuable ring was passed down through generations in the family.”

“The paintings were considered as valuables by the art collectors.”

A vehicle is a means of transportation that is powered by an engine.

There are many different types of vehicles, including cars, trucks, buses, and airplanes.

Vehicles play a vital role in modern society as they allow people to travel to work, school, and other places with ease.

Cars are the most popular form of transportation, but other types of vehicles, such as buses and trains, are also important for transportation.

A valve is a mechanical device that is used to control the flow of liquids, gases, or other materials through a pipe or other container.

A valve can be used to start, stop, or regulate the flow of a substance.

It is an important component in many types of machinery, including engines, boilers, pumps, and other equipment.

Each type is designed for a specific purpose and operates differently.

For example: “The valve on the pipe was used to control the flow of water.”

“He had to replace the faulty valve in the engine.”

“The boiler had several safety valves to prevent overpressure.”

“The ball valve was used to shut off the gas supply in an emergency.”

Vitamins are essential micronutrients that are required for the proper functioning of the body.

They play critical roles in many bodily processes, including growth and development, metabolism, and the maintenance of overall health.

Vitamins can be divided into two main categories: water-soluble and fat-soluble.

Water-soluble vitamins, such as Vitamin C and B vitamins, are not stored in the body and need to be consumed regularly.

Fat-soluble vitamins, such as Vitamin A, D, E, and K, are stored in the body’s fat cells and liver, and it’s not necessary to consume them daily.

Vitamin deficiencies can lead to a wide range of health problems, including anemia, scurvy, beriberi, and rickets.

It’s important to consume a balanced diet that includes a variety of fruits, vegetables, and other foods that are rich in vitamins, or take dietary supplements as recommended by a physician or a dietitian. 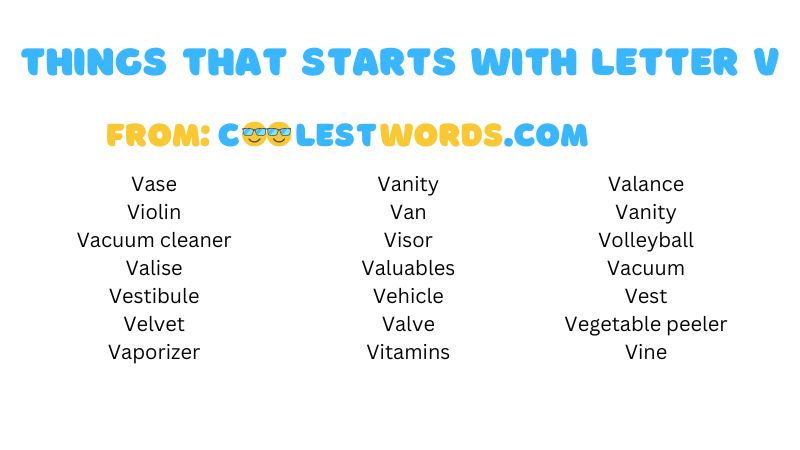 Other objects and things that start with the letter V

Objects and Things That Starts With Letter A