Objects and Things That Starts With Letter W

From the practical to the abstract, the words and objects that start with “W” have a significant impact on our lives and deserve closer examination.

Whether it is the wind that powers our turbines or the web that connects us to the world, we will delve into the many ways in which the letter “W” enriches our lives.

A wall is a vertical structure that is used to separate or enclose an area.

It can be made of a variety of materials, such as brick, stone, wood, or concrete, and can serve a variety of purposes, including providing security, privacy, and insulation.

Walls can be found in many different settings, such as homes, buildings, and cities.

Some of the famous walls include The Great Wall of China, the Berlin Wall, and the wall along the US-Mexico border.

Walls have played an important role in history and continue to shape the physical and political landscape of the world today.

A wardrobe is a piece of furniture typically used for storing clothes, shoes, and other items of clothing.

Wardrobes can come in various styles and sizes, from a single, standalone piece of furniture to a built-in closet with multiple shelves and hanging space.

Wardrobes can be either freestanding or attached to a wall.

Some wardrobes have sliding doors or mirrored doors, others have traditional hinged doors.

Wardrobes are commonly found in bedrooms, but can also be found in other rooms such as a dressing room or walk-in closet.

They are a useful and practical storage solution that keeps clothes and other items organized and easily accessible.

A watch is a small timepiece that is worn on the wrist or carried in a pocket.

It includes a face or display for showing the time, a mechanism for keeping time, and a band or other means of attaching it to the body.

Watches can come in many different styles, from simple, functional designs to ornate and luxurious pieces.

They can be mechanical, with gears and springs that need winding, or quartz, which is powered by a battery.

Some watches also have additional features such as a stopwatch, alarm, calendar, or even GPS capabilities.

Watches have been used for centuries as a practical tool for keeping time but have also become a popular fashion accessory.

Wicker is a type of weaving material made from natural fibers such as willow, bamboo, rattan, and others.

It is often used to make furniture, baskets, and other decorative items.

Wicker furniture is known for its durability and attractive appearance and is commonly used for outdoor seating and dining sets.

Wicker can be left in its natural state or painted in different colors.

Wicker is a material that can be used for a variety of purposes and can add a rustic and natural touch to any home or outdoor space.

A wheel is a circular object that rotates around an axle, allowing for movement and transportation.

Wheels have been used for thousands of years, with the earliest known examples dating back to ancient Mesopotamia and Egypt.

They can be made of various materials such as wood, metal, rubber, and plastic.

They come in different shapes and sizes, depending on the intended use, such as bicycle wheels, car wheels, and airplane wheels.

The invention of the wheel has had a profound impact on human civilization, as it has greatly improved transportation, logistics, and production.

The wheel allowed for the invention of the wheelbarrow, cart, and eventually the car, train, and airplanes.

In addition, wheels are also used in many machines and mechanisms, such as gears and pulleys, to transmit and change the direction of motion.

A wand is a thin, cylindrical object that is often used as a tool or accessory in various cultures and traditions.

In magic and witchcraft, a wand is often associated with casting spells and summoning magical powers.

The wand has been often depicted in fantasy literature and movies, as a magical tool used by witches, wizards, and other magical beings.

In the Harry Potter series, for example, wands are used by wizards and witches to cast spells, and the wand type, core, and length can affect the power and precision of the spells.

In stage magic, a wand is often used as a prop to perform illusions and tricks.

Wands can also be used in music, as drumsticks and conducting batons.

A well is an excavation or structure that is created to access underground water or other subsurface resources.

Wells can be drilled or dug and can range in depth from a few feet to thousands of feet.

They can be used for irrigation, drinking water, industrial processes, and even energy production.

A well is constructed by drilling a hole in the ground or by digging a hole, lined with a pipe or casing to prevent collapse and contamination.

The water or other subsurface resources are accessed by using a pump or by simply allowing the water to flow up through the well by gravity.

Wells are commonly found on farms, in rural areas, and in regions where surface water is scarce.

They have been used for centuries and are still a vital source of water for many communities today.

A web is a network of interconnected threads or lines that are often produced by spiders and other arachnids but also can be man-made.

Spiders spin webs to catch insects and other small prey, and their webs can take many different forms, such as orb webs, funnel webs, and sheet webs.

The structure of spider webs is incredibly strong and durable, making it a fascinating subject for scientists and engineers who have studied it to develop new materials, and technologies like bulletproof vests.

In the digital world, the “web” is also used as a shortened form of “World Wide Web” which refers to the system of interconnected documents and other resources, linked by hyperlinks and URLs, that are accessed via the internet.

The web is a vast network of information that can be accessed through web browsers and search engines, it has revolutionized the way we communicate, learns, and share information.

It’s an essential part of our daily lives, allowing us to easily connect with people, access information, and conduct business online.

A wire is a thin, cylindrical strand of metal or other conductive material. It is often used to carry electrical current and is an essential component in electrical wiring, as well as in a wide range of other applications.

Wire can be made of various materials including copper, aluminum, steel, and others, depending on the intended application.

Wire can be used in many different applications, such as in the construction of buildings, bridges, and other structures, as well as in electronics, machinery, and transportation.

In addition, wire is also used in the production of jewelry, art, and other decorative items.

Wire can be produced in different shapes and forms, such as stranded wire, solid wire, and braided wire, and can have a variety of coatings, such as insulation, to protect the wire and the user.

Wire is also used in other industries like textile and agriculture, and wire mesh is used as fencing, aviary, and even in culinary as wire mesh strainers.

A whiteboard is a large, flat surface that can be written on with special markers and easily erased.

They are commonly used in classrooms, offices, and conference rooms for presentations, brainstorming sessions, and other meetings. Whiteboards are also known as dry-erase boards or marker boards.

Whiteboards are made of a smooth, glossy surface that is coated with a special material that allows markers to be written on it and easily erased.

They come in various sizes and can be mounted on walls or used with a stand.

Whiteboards have become a popular tool for presentations, meetings, and brainstorming sessions because they allow for the easy creation and modification of diagrams, charts, and notes.

They are also beneficial for remote learning and collaboration, as they can be used in virtual meetings and shared remotely.

In recent years, digital whiteboards have also been developed, they are similar to traditional whiteboards but they have the added benefit of being interactive and allowing for the saving, editing, and sharing of written content.

A wig is a head covering made of human hair, synthetic fibers, or a combination of both, that is worn to change a person’s hairstyle or to cover hair loss.

They can be worn for a variety of reasons, including fashion, cultural or religious customs, and medical conditions that cause hair loss.

Wigs come in different styles and lengths, from short to long, straight to curly, and can be designed to match a person’s natural hair color or to create a bold, new look.

Human hair wigs are made from real hair and are considered to be the most natural-looking and durable option.

They can be styled, cut, and colored like natural hair, but they are also more expensive than synthetic wigs.

Synthetic wigs, on the other hand, are made from synthetic fibers that are designed to mimic the look and feel of human hair.

Wigs can be secured to the head with combs, clips, or adhesive and can be worn for a short time or extended periods.

They are also available in different cap constructions such as traditional caps, lace front, and monofilament caps, each with different features and benefits.

A wallet is a small, flat case that is used to carry personal items such as cash, credit cards, identification documents, and other valuable items.

Wallets are typically made of leather or other durable materials and can be carried in a pocket, purse, or bag.

Wallets are a convenient and practical way to carry personal items and can also be used to make a fashion statement.

A windmill is a machine that converts the energy of wind into rotational energy using vanes called sails or blades.

The most common type of windmill is a horizontal-axis turbine, which has blades that rotate around a horizontal axis.

Windmills have been used for centuries to grind grain, pump water, and generate electricity.

In the past, windmills were primarily used for agricultural purposes, such as milling grain and pumping water for irrigation.

Wind turbines can be found in a variety of sizes, from small turbines used for powering individual homes and businesses to large turbines used in wind farms that generate electricity on a commercial scale.

They can be found on land, offshore, and in urban areas.

They are considered renewable energy sources and can help reduce dependence on fossil fuels.

Wind turbines work by allowing wind to flow through the blades of the turbine, which causes the turbine to rotate.

The rotation of the turbine generates electricity, which is then sent to a power grid for distribution. 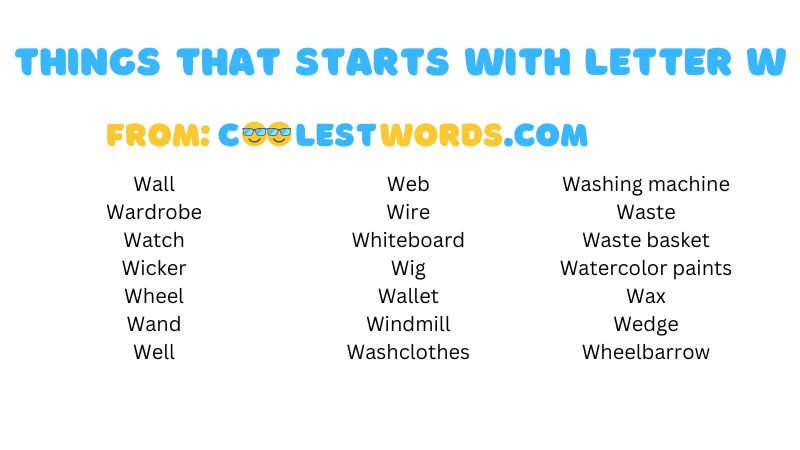 More Objects And Things That Start with W