Verbs are an essential component of any sentence. They are “action words” that give a sentence meaning and make it complete.

A predicate tells us what a subject is doing or in what state it is in a sentence, which is its main verb.

An action verb indicates the time when the action or state occurred, known as the tense, in the sentence.

Most Common Verbs That Start With The Letter E

Many verbs start with the letter E, some of which are listed below:

The verb ”eat” means to consume food or drink by putting it into the mouth and swallowing it.

It is used to describe the action of a person or animal consuming something as sustenance.

To eat means to take food through the mouth for nourishment. For example: “I eat breakfast every day.”

To embrace means to hug or hold someone affectionately, often as a sign of love or support. Embrace can also be used more generally to describe any kind of acceptance, support, or engagement with something.

For example, a person might embrace a new idea, a culture, or a way of life.

The verb “embrace” is often used to describe the act of welcoming or accepting something new or different.

To emit means to produce or send out something, such as a sound, a smell, or a substance. For example: ’’The car emitted a loud noise as it drove by.’’

“The plant emits a pleasant smell when it blooms.”

The verb “enclose” can also be used more abstractly to describe the act of including or enclosing something within something else.

For example, a letter might be enclosed in an envelope.

The verb “engage” has several meanings:

– to participate in or become involved in an activity: “She engaged in a conversation with her coworkers.”

– to hire or employ someone: ” The company engaged a new marketing director.”

– to pledge to marry someone: “ He engaged himself to his girlfriend.”

– to occupy the attention or efforts of someone: “The puzzle engaged his mind for hours.”

– to enter into a conflict or fight: “The two armies engaged in battle.”

To enhance something means to make it better, more attractive, or more valuable.

It can also mean to increase or augment something. For example: “The new software has enhanced the performance of the computer.”

“She enhanced her natural beauty with makeup.”

To enroll means to register or enroll oneself in a course, school or program.

It can also mean signing up or registering for something. For example: “She enrolled in a French language course at a local college.”

“He enrolled his children in a summer sports program.”

To enter means to go or to come into a place or situation. For example, a person might enter a room, a building, or an event.

The verb “enter” can also be used more abstractly to describe the beginning of a process or activity. For example, a person might enter a contest or a relationship.

In some cases, enter can also be used to describe the act of inserting or introducing something into a system or environment.

For example, a person might enter data into a computer, or a virus might enter a network.

The verb “enjoy” means to take pleasure or satisfaction in something. It is used to describe the feeling of delight or contentment that comes from experiencing or doing something that one finds enjoyable.

For example: “I enjoyed reading the book” or “She enjoys spending time with her friends”.

To escalate means to increase in intensity, severity, or size. It can also refer to a situation or conflict becoming worse or more complicated.

For example: “The dispute between the two countries has escalated into a full-blown war.”

“The conflict between the two employees escalated into a physical fight.”

The verb ‘’escape’’ means to get away from someone or something that is confining, threatening, or dangerous.

It can also refer to the act of avoiding something unpleasant or undesirable. For example, you might escape from a burning building or escape a predator by running away or hiding.

The verb “escape” can also be used more broadly to describe any situation in which you avoid or get away from something, such as escaping the stresses of everyday life by going on vacation.

To establish means to set up or create something, such as a business, a system, or a rule.

It can also mean to prove or make something certain. For example:  “The company was    established in 1995.”

“He established a new record in the marathon.”

The verb’’estimate ‘’ means to roughly calculate or judge the value, number, quantity, or extent of something.

It can also refer to the act of forming an opinion or judgment about something based on limited information or evidence.

For example, you might estimate the cost of a home renovation project, or estimate how much time it will take to complete a task.

Estimating can be a useful skill when you need to make decisions or plan for the future, but it’s important to keep in mind that estimates are often based on incomplete or uncertain information and may not be entirely accurate.

To evaluate means to determine the value, worth, or quality of something. It often involves making a judgment or assessment based on careful consideration of relevant factors.

For example, you might evaluate a math problem to determine the correct answer, or evaluate a job candidate to decide if they are the best fit for a position.

In general, evaluating something requires careful consideration and analysis and may involve comparing it to other options or standards.

The verb “ exercise” generally means to engage in physical activity or practice to improve or maintain physical fitness, skill, or proficiency.

It can also refer to the act of using a legal right or power, or giving full play to a faculty or quality.

Overall, the verb “exercise” conveys the idea of putting effort and energy into something in order to improve or maintain it.

For example, you might exercise by going for a run or lifting weights.

Exercising is important for maintaining good physical health and can also have mental benefits.

To exist means to be present or in existence. It can be used to describe the state of being of a person, place, thing, or concept.

For example, you might say that a person exists or that a particular species of the plant exists in a certain region.

Existence is the fact of being alive or present in the physical world. When something exists, it is real and can be observed or experienced in some way.

To expand means to increase in size, to become more extensive, or to spread out.

It can also mean giving more information or detail about something.

Here are some example sentences using the verb “expand”:

“The company is expanding its operations into new markets.”

“Can you please expand on your previous statement and provide more information?”

“As she grew older, her knowledge and understanding of the world expanded.”

To explain something means to make it clear or understandable, typically by giving a detailed account or description of it.

When you explain something, you are providing information or a description of it to help someone understand it better or to clarify any misunderstandings about it.

You might explain a concept, a process, a piece of information, or any other type of topic to someone to help them understand it more fully.

To explore means to investigate, examine or look into something thoroughly and systematically.

It can also mean traveling to or visiting a place to learn about it or to experience it.

For example: “The scientist is exploring the properties of a new type of material.”

“The group of hikers decided to explore the uncharted path through the forest.” 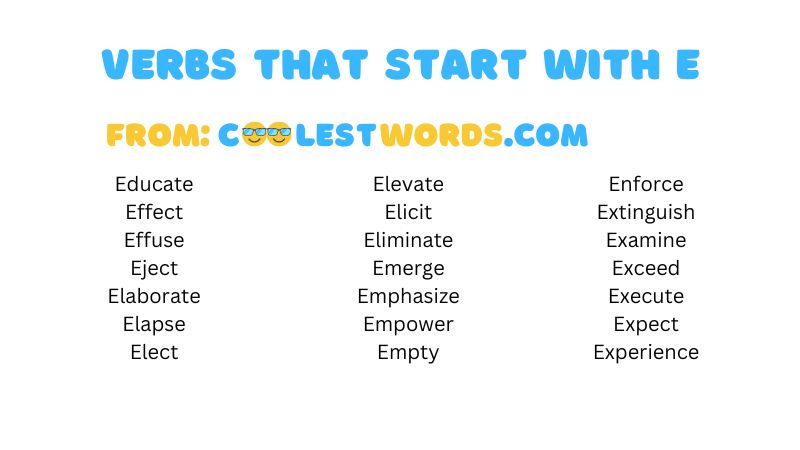 Verbs That Start With C