Verbs are essential words in the English language and play a central role in forming sentences, and expressing different tenses, moods, and forms.

Most common verbs starting with the letter F

The verb “facilitate” means to make something happen or make it easier to happen.

It can also mean helping or assisting in the progress or accomplishment of something.

Some examples of how “facilitate” can be used include:

To help make an event or process occur more smoothly or efficiently: “The company’s new software will facilitate communication between employees.”

To assist or help with a task or activity: “The teacher facilitated a discussion about the book.”

To help create or establish conditions that  are helpful for something: “The government facilitated the development of the new technology.”

To help or make it easier for someone to do something: “The new law will facilitate the process of obtaining a visa.”

To act as a mediator or go-between to bring about an agreement: “The UN facilitator helped the two countries reach a peace treaty.”

The verb “fade” has several different meanings, but they all have to do with a gradual decrease in strength, intensity, or visibility. Some common meanings include:

To become less bright or less visible: “The colors on the painting faded over time.”

To lose strength or intensity: “His memory of the incident is fading.”

To become less audible: “The music faded in the distance.”

To become weaker or less active: “The plants will fade if they don’t get enough sunlight.”

To disappear gradually: “The pain in my leg is slowly fading away.”

To die out, to stop happening: “The fashion trend is fading.”

To lose or diminish in importance or influence: “His popularity has faded since the scandal.”

To become less vivid or distinct over time: “The photograph was faded by the sun.”

The verb “fail“ means to not succeed or to not meet the desired outcome or expectation.

Some examples of how “fail” can be used include:

To not pass a test or examination: “He failed his driver’s test.”

To not meet a standard or requirement: “The building failed inspection”.

To not accomplish a task or goal:” The mission failed due to equipment failure.”

To not meet expectations or to disappoint: “The product failed to live up to the hype.”

To cease to function or work properly: “The engine failed while we were flying.”

To neglect one’s duty or obligation: “The company failed to pay their taxes on time.”

To not be present, available, or successful when needed: “The team failed to perform in the finals.”

To not be able to meet the demands of a situation or circumstance:” He failed in the face of adversity.”

The verb “fall” can have several different meanings and uses. Some of the most common include:

To move from a higher to a lower position under the effect of gravity: “The apple fell from the tree.”

To become lower in level, degree, amount, or value: “The temperature fell below freezing.”

To become unconscious or collapse: “He fell to the ground in a dead faint.”

To take place or happen: “The election fell on a Monday.”

To happen by chance; to happen without being planned:” Love fell into my life when I least expected it.”

To lose one’s balance and collapse: “She fell down the stairs.”

To become weaker or less in intensity, quality, or numbers: “The business fell on hard times.”

To give in to an emotion such as sadness or hopelessness: “He fell into a deep depression after his wife died.”

The verb “fall” can be used in idiomatic expressions, such as “fall asleep”, “fall in love”, “fall out of favor” etc.

The verb “familiarize” means to cause someone to become familiar or knowledgeable with something through experience or instruction.

It can also mean making something more common or well-known.

Some examples of how “familiarize” can be used include:

To make someone aware of or accustomed to something new: “The tour guide familiarized us with the history of the city.”

To provide someone with knowledge or information about a subject: “The training program familiarized the employees with the new software”.

To make someone feel at ease or comfortable with something: “The company’s onboarding process is designed to familiarize new employees with company culture.”

To make something more widely known or accepted: “The company is trying to familiarize the public with their new product.”

To make someone understand the details, and usages of something: “She familiarized herself with the laws of the country before moving to it.”

The verb “fancy” means to have a liking or desire for something.

It can also mean to think highly of someone, to consider them attractive, or to entertain a notion or idea.

Some examples of how “fancy” can be used include:

To have a desire or liking for something:” I’ve always fancied traveling to Japan.”

To think highly of someone, especially in terms of their appearance:” He fancies her, he thinks she is attractive.”

To entertain an idea or notion: “I’ve been fancying the idea of starting my own business.”

To have a desire or urge: “He fancied a drink after a long day at work.”

To consider something to be of high quality or fashionable: “The store is selling fancy clothes.”

The verb “feed” means to provide food for someone or something.

It can also mean giving something the necessary sustenance or fuel to function or grow.

Some examples of how “feed” can be used include:

To give food to a person or animal: “I need to feed the cat before I leave for work.”

To provide something with the necessary sustenance or fuel: “The generator is fed by propane.”

To provide input or data to a machine or system:” We need to feed the scanner with the document.”

To give something the necessary materials or information for growth or development: “The plants need to be fed regularly with fertilizer.”

To take care of the needs or wants of something or someone: “He feeds his hobbies with time and money.”

The verb “feed” can also be used in idiomatic expressions, such as “feedback”, “feed off”, “feed on” and “feed up” each with a different meaning.

The verb “feel” can have several different meanings and uses, depending on the context in which it is used.

Some of the most common include:

To use the sense of touch to perceive something:” I felt the soft fur of the cat.”

To experience an emotion or physical sensation: “I feel happy when I’m with my friends.”

To form an opinion or judgment based on one’s perception or experience:” I feel that the movie was not worth watching.”

To be able to touch or perceive something by touch: “I couldn’t feel my toes after standing for so long.”

To seem or appear to be: “It feels like a cold is coming on.”

To perform an act of touching or feeling something with the hand: “She felt for the light switch in the dark.”

To express a sense of empathy or compassion: “I feel for you, that must be hard.”

The verb “find” means to discover or come across something, either by chance or by searching for it.

Here are some examples of how “find” can be used:

To discover something unexpectedly:” I found a $20 bill on the street.”

To come across something while looking for it: “I found my missing keys on the couch.”

To locate something after a search: “The detective found the missing child.”

To obtain something: “I was able to find the book I was looking for at the library.”

To come to a conclusion or decision:” After researching, I found that the best option was to buy a used car.”

To be in a particular state or condition: “He found himself in a difficult situation.”

To come to know or understand:” I found out that she was married.”

The verb “find” can also be used in idiomatic expressions such as “find out”, “find oneself” and “find fault” each with a different meaning. 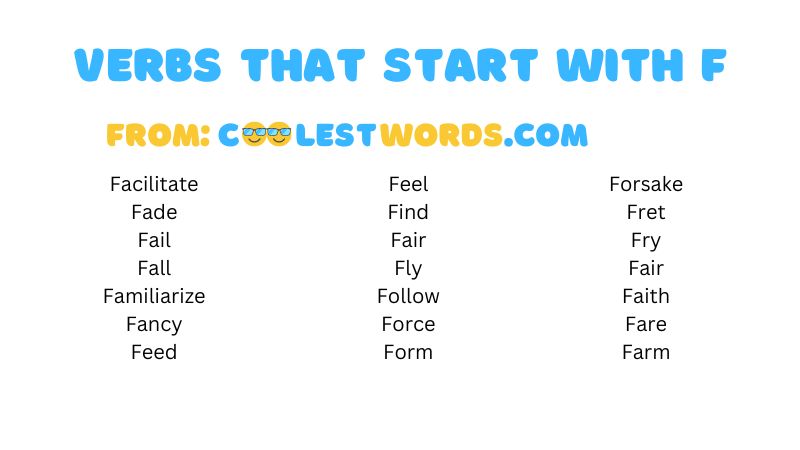 Other verbs starting with the letter F

Verbs That Start With B