The verbs that start with the letter G can be used to describe a wide range of actions, movements, and states, making them an essential part of our everyday vocabulary.

The Most Common Verbs That Start With The Letter G

The verb “go” is one of the most commonly used verbs that start with the letter g.

It can indicate a wide range of actions, including movement, progression, and change.

For example, you can use “go” to indicate that you’re leaving a place, such as “I’m going home”, or that something is happening or progressing, such as “The party is going well”.

Additionally, it can be also used to indicate a change in state or condition, such as “The milk has gone bad” or “He went crazy after the accident”.

The verb “gain” means to acquire, obtain, or increase something, often through effort or sacrifice.

It describes the process of obtaining possession of something, like “He gained control of the company,” or to describe an increase in something, like “The stock market gained 50 points today.”

The verb “get” has many different meanings and uses in the English language:

To acquire or obtain something: “I need to get a new phone,” or “He’s going to get a degree in computer science.”

To become or make oneself something: “I’m getting tired,” or “She’s getting ready for work.”

To cause or bring about something: “He got the job done,” or “She got him to agree to the plan.”

To travel to a place: “I’m going to get the train”

This verb is, also, used to describe a particular state or condition: “I’m getting old,” or “You’re getting better at this.”

The verb “gesture” means to make a movement or series of movements with the hands, head, or another part of the body as a way of expressing an idea, emotion, or intention.

It is often used in the context of communication and body language.

A gesture can be intentional or unintentional and can convey a wide range of meanings depending on the context and culture in which it is used.

Some examples of gestures include pointing, waving, nodding, shrugging, and making facial expressions.

It can refer to a symbolic or ceremonial act or movement.

For example: “He gestured for me to come over to him with a wave of his hand.”

To give means to transfer possession, control, or use of something to someone else.

The verb” giggle” means to laugh in a light, silly, or partly suppressed manner, often as a reaction to something amusing or ticklish.

It is usually associated with children and young people and is often used to indicate a sense of playfulness or innocence.

When someone giggles, they make a high-pitched sound, often in a series of quick bursts, and often accompanied by smiling or shaking the body.

Giggling is a sign of being happy and joyful, but it can also be used in a negative way to describe someone who giggles nervously or uncontrollably.

For example: “She couldn’t help but giggle at the silly joke her friend had told her.”

“Google” as a verb refers to using the search engine Google to look up information on the internet.

The term has become synonymous with searching for information online, regardless of which search engine is being used.

To “google” something means to search for information about it using a search engine.

For example, you might say “I’ll google it” when someone asks you a question and you want to look it up on the internet to find an answer.

It is important to note that “Google” is a brand name and the verb form of “Google” is not official, it is colloquial. Instead, people use a more general term like “search” to describe this action.

To grow means to increase in size, amount, strength, or quality through natural development or cultivation.

“A plant grows taller and wider as it matures.”

“The baby grew into a toddler and then a child.”

“The company grew rapidly in its early years but has since plateaued.”

“He grew into a fine young man.”

“The city grew as more people moved there.”

The verb “gamble” means to engage in a risky activity with the hope of obtaining a desired result, but with the possibility of losing something of value.

It often refers to activities such as betting money on games of chance, such as poker, slot machines, or roulette.

Generally, it is the activity that involves taking a risk in the hopes of achieving a desired outcome, such as “He gambled his career on the success of the new project.”

To gather means to collect, bring together, or assemble a group of things or people.

It can refer to physically collecting items together or bringing people together for a specific purpose, or to the collection of information, evidence, or data.

For example: “I am gathering information about the company’s financial performance.”

It can imply a gradual increase in quantity, like “The storm gathered strength as it approached the coast.”

To generate means to create or produce something new or original.

It also means to bring something into existence or to cause something to happen.

In the context of computing, “generating” refers to the process of creating or producing something, such as data or a computer program, using a set of instructions or rules.

For example: “The computer program was able to generate thousands of unique combinations of words in just a few seconds.”

The verb “glow” means to emit light, usually in a steadily or gradually manner.

It can also refer to a feeling of warmth or heat, or a sense of well-being or contentment, or to express strong emotions such as pride or pleasure.

For example: “Her face glowed with happiness.”

The verb “greet” means to welcome or acknowledge someone’s presence, often with a word or gesture of greeting, or to receive or respond to someone in a polite or friendly manner.

For example: “She greeted her guests at the door with a warm smile.”

To grind means to reduce something to small particles or powder by crushing or rubbing it against a rough surface.

Additionally, it  means to make a harsh, grating noise by rubbing two surfaces together or to wear something down by friction.

The following sentences describe the use of the verb “grind”:

“I need to grind these nuts into a paste for the recipe.”

“The gears of the machine were grinding against each other, causing a loud noise.”

“She was grinding her teeth in her sleep, indicating she was under stress.”

“The workers had to grind the surface of the metal to remove the rust.”

“The wind was so strong, it was grinding sand against the windows.”

“The dancers were grinding on the dance floor to the beat of the music.”

To grumble means to complain or to make a low, continuous sound expressing dissatisfaction or resentment.

For example, “The customer grumbled about the long wait for service.”

It’s an informal word indicating a low level of dissatisfaction. 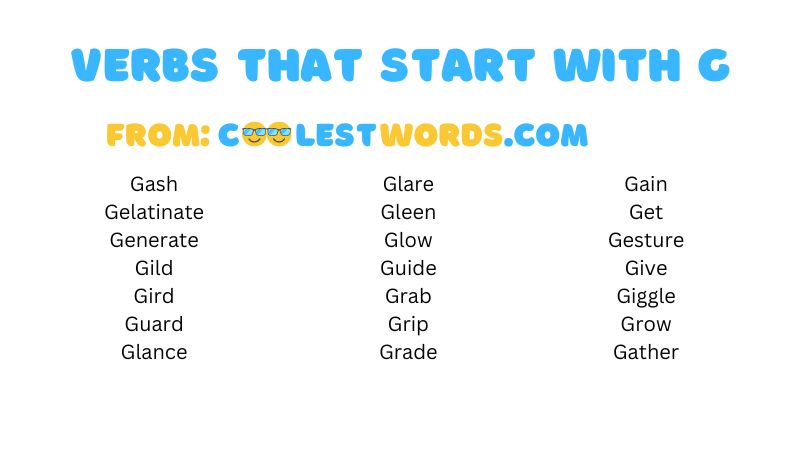 Other verbs that start with the letter G

Verbs That Start With B