Verbs that start with the letter “h” are a diverse group of words that can convey a wide range of meanings and actions, from possession and completion to providing assistance and embracing.

The Most Common Verbs That Start With The Letter H

“Have” is a verb that can be used in a variety of ways in a sentence and depending on the context, has several different uses:

Possession: “I have a dog.”

Completion of an action: “I have finished my homework.”

Experience: “I have been to France.”

Obligation or responsibility: “I have to go to the store.”

Eating or drinking: “I’m going to have breakfast.”

Physical state: “I have a headache.”

The verb “hear” refers to the act of perceiving sound by the ear.

It means to become aware of a sound or noise, usually by listening actively.

“I can hear the music from the next room.”

“Did you hear what he said?”

“She heard a noise outside.”

“He heard the baby crying in the other room.”

“I heard the birds singing in the morning.”

We also use this verb in idiomatic expressions like “I hear you” to express that one has understood or acknowledged what another person has said.

Additionally, “hear” can also be used in formal contexts such as court proceedings, where a witness testifies that they heard something, as in

“The witness heard the defendant confess to the crime.”

It’s a basic verb that can be used in many situations, it’s a fundamental sense that allows us to communicate with others.

The verb “help” means to give assistance or support to someone or something.

It means to make something easier or less difficult, to give aid or support to someone who needs it.

“Can you help me carry this box?”

“The teacher helped the student with her math problem.”

“He helped her fix her bike.”

“She helped him prepare for the presentation.”

“I need help with my homework.”

“He helped his mother with the groceries”

This verb is often used in idiomatic expressions like “help oneself” to mean to take something without asking permission.

Additionally, “help” can also be used in more formal or official contexts such as emergency services, where people can ask for help in case of an emergency.

It’s a common verb that can be used in many situations, it’s an act of kindness and generosity that can make a big difference in someone’s life.

The verb “hit” means to come into contact with a force or object, typically with a striking motion.

“He hit the ball with the bat.”

“She hit her head against the door frame.”

Moreover, it is used in informal or colloquial speech to express anger or frustration

In the context of music, as in “The song hit the top of the charts” meaning it became very popular.

The verb “hold” means to hold or grasp something firmly, usually with the hand or hands.

“He held the pencil tightly.”

“She held the baby gently.”

“I held the door open for him.”

This verb is also used in idiomatic expressions such as “hold on,” which means to wait or be patient,

“hold one’s tongue,” which means to be silent or not speak, or

“hold the fort,” which means to take command or act as a leader.

We often use it to indicate that something is being retained, such as “I’ll stand firm” or “He’s holding his ground.”

To hunt means to pursue an animal and try to catch or kill it for food or play.

“He went hunting for deer in the forest.”

“The lion is hunting for its next meal.”

This verb can be used in idiomatic expressions such as “hunt high and low,” meaning to look everywhere, “hunt and peck,” meaning to tap a finger to find the keys, or “hunt someone down,” meaning to find and catch a person.

It can also indicate that someone is hunting for something,

or indicate that someone is aggressively pursuing something,

The verb ”hurry” means to move or act quickly to get something done or to arrive somewhere on time.

“Hurry up, we are going to be late for the movie.”

“He hurried to finish the project before the deadline.”

“I have to hurry before it’s too late.”

It can be used in idiomatic expressions such as “hurry up and wait”, meaning to be in a rush but then have to wait;

“in a hurry”, meaning to be in a rush or to act quickly;

and” not to hurry”, meaning to take one’s time.

It can also indicate that someone is moving quickly: “He is hurrying to catch the train”

or that someone is pushing or urging someone to do something quickly: “Hurry up and make a decision”

or “I am hurrying him to finish the work.”

“To hire” means to employ someone for a specific task or purpose, usually for pay or wages.

“The company has hired a new sales representative.”

“I hired a babysitter for the evening.”

“He hired a car for his vacation.”

We often use this verb in idiomatic expressions such as:

“ hire and fire”, which means to employ and fire employees frequently;

“ hire on the spot”, which means to offer someone a job immediately after an interview;

“hire out”, which means to lend or rent something to someone else.

Examples: “I hire a lawyer”

“He hires a contractor.”

To hike means to walk or hike for an extended time, typically for leisure or exercise, often in a natural setting such as a forest, mountains, or park.

“We are going hiking in the mountains this weekend.”

“I hike every morning to stay in shape.”

This verb is often used in idiomatic expressions, such as “hike up,” meaning “to raise,”

“hike the price,” meaning “to raise the price of something,” and

“hike the trail”, meaning “to walk on a trail.”

To hide means to conceal or cover something so that it is not visible or cannot be found or to keep oneself or something out of sight or to prevent someone or something from being seen.

Some examples of sentences using “hide” include:

“The child hid the toy under the bed.”

“I hid my face behind my hands.”

“He hid the evidence before the police arrived.”

“I will hide in the closet until you leave.”

It is an important verb to describe actions related to secrecy, concealment, and evasiveness.

The verb “hatch” refers to the process of birds, reptiles, insects, and other animals emerging from an egg.

It can  refer to the emergence of a plan or idea. In both cases, it suggests a process of development and growth.

“The chicken hatched from its egg.”

“We need to hatch a plan to fix this problem.”

“The company hatched a new idea for a product.”

“She hatches a plot to kill the king.” 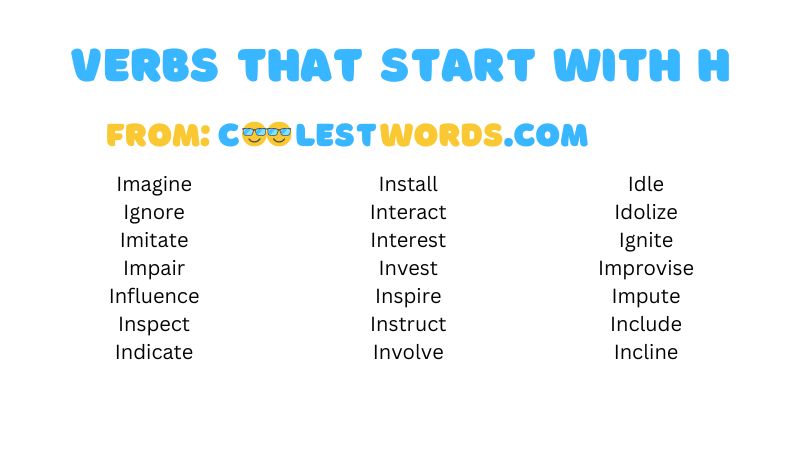 More Verbs That Start With H

Verbs That Start With I