Verbs That Start With I

The English language is rich with a diverse range of verbs, each of which plays a crucial role in expressing action or state of being.

Verbs that begin with the letter “i” are no exception, and they contribute to the formation of coherent and meaningful sentences.

The Most Common Verbs That Start With The Letter I

The verb” imagine” means to form a mental image or conception of something that is not accessible to the senses, or to believe something to be true or possible even if it is not known or certain.

“I cannot imagine life without you.”

“I imagined a world where everyone was equal and happy.”

“Can you imagine what would happen if we did not have enough water to drink?”

“Ignore” is a verb that means to refuse to pay attention to or notice something.

We use it to describe a person’s behavior or actions, as well as one’s thoughts or emotions.

For example, a person might say “I ignored the noise outside my window” to indicate that they chose not to pay attention to it or give it any significance.

Similarly, someone might say “He ignored her pleas for help” to indicate that he refused to pay attention to or take action in response to her requests for assistance.

“Imitate” is a verb that means to copy or reproduce the behavior, actions, or mannerisms of someone or something else.

It is often used to describe when someone copies the actions or behavior of another person, such as “She imitated her teacher’s accent.”

Imitation can also be used in a positive or negative context.

For example, “the child imitated her mother’s kindness” would indicate that the child is copying and trying to emulate the positive trait of her mother.

On the other hand, “he imitated the bully’s aggressive behavior” would indicate that the person is copying and trying to emulate a negative behavior, which is not desirable.

In some cases, “imitate” can also be used to describe the reproduction of a work of art or a product, such as “the painting was an imitation of the famous masterpiece.”

To impair is to weaken or damage something, making it less effective or functional.

It can also refer to a person’s ability to function being diminished or compromised.

“The injury impaired his ability to walk.”

“The flood impaired the structural integrity of the building.”

“Influence” is a verb that means to affect or change the behavior, attitude or decision of someone or something.

We also, use it to talk about the ability to shape or change something subtly or indirectly.

It can also be used in a more broad sense to refer to the ability to affect or change the way something happens or develops.

“His opinion influenced the group’s decision.”

“Music has a strong influence on people’s feelings.”

“The weather conditions influenced the outcome of the game.”

To inspect means to examine something thoroughly and carefully, often to find defects or make sure it is in good condition.

Additionally, it can mean looking at something officially, as part of an investigation or oversight.

“Indicate” is a verb that means to show or point to something, to give a sign or signal of something, or to suggest or imply something.

“The arrow on the map indicates the direction we should take.”

“His facial expression indicated that he was not happy.”

“The poll results indicated that most people were in favor of the proposal.”

To install means to set up or put into operation something, such as a device or software, in a particular place or system so that it is ready for use.

It can also mean appointing or placing someone in a position of authority or responsibility.

“They installed a new security system in the building.”

“I need to install this software on my computer.”

“He was installed as the new president of the company.”

To interact means to communicate or have a relationship with someone or something, usually in a way that involves the exchange of information or ideas.

It also refers to the way two or more people or things interact.

“The kids had fun interacting with each other.”

“The company interacts with its customers through social media.”

“The different departments of the company interact to achieve the common goal.”

“Interest” is a verb that means to engage or interest someone or something, to make someone curious or excited about something, or to make something relevant or important to someone.

In addition, it refers to the money paid or charged for borrowing money.

“They are going to charge interest on the loan.”

“Invest” is a verb that means to put money, time, or effort into something with the expectation of getting a profit or benefit in the future, allocating resources, usually financial, to projects, businesses, or assets to earn income or capital appreciation.

“I invested in a new business.”

“He invested his time and energy in his studies.”

“The company decided to invest in a new technology.”

“To inspire” is a verb that means to fill someone with the urge or ability to do or feel something, especially something creative.

It can also mean that someone is guided or influenced by divine or supernatural influence.

“Your speech inspired the audience to act.”

“The beautiful sunset inspired me to paint.”

“The story of the heroic soldier inspired the boy.”

To instruct means to impart knowledge or skills to someone by teaching, training, or giving them orders or instructions.

“The teacher instructed the students to solve the math problem.”

“I instructed my assistant to book the flight.”

“The recipe instructed to bake the cake for 25 minutes.”

To involve means to require the participation of someone or something in an activity, process, or situation.

“The project involves working with several other companies.”

“Irrigate” is a verb that means to supply water to land, especially using canals, ditches, or pipes, to grow crops or maintain the landscape.

Another meaning of this verb is cleaning or flushing an area of the body with water or another liquid.

“The dentist irrigated my mouth before filling the cavity.”

“This area of the field needs to be irrigated more often.”

“Isolate” is a verb that means to separate someone or something from others or the normal environment, either physically or socially.

It can also mean identifying, isolating, and removing a specific microorganism from a sample.

“They isolated the infected patients to prevent the spread of the disease.”

“He isolated himself after being separated from his friends.”

“The scientists are trying to isolate the genetic material of the virus.”

“Itemize” is a verb that means to make a detailed list of the separate parts or items of something.

It refers to the process of breaking down a general statement or description into specific details or listing the items that make up a total amount, such as expenses or charges.

The verb “itch” means to have an uncomfortable or irritating sensation on the skin that makes one want to scratch.

We use it to express a feeling of discomfort or a desire to do something.

This verb is usually used in the context of describing a physical sensation, as in “My skin itches” or “I am itching all over.”

We can use it in a more figurative sense, as in “I am itching to start this new project” meaning you are eager and ready to begin. 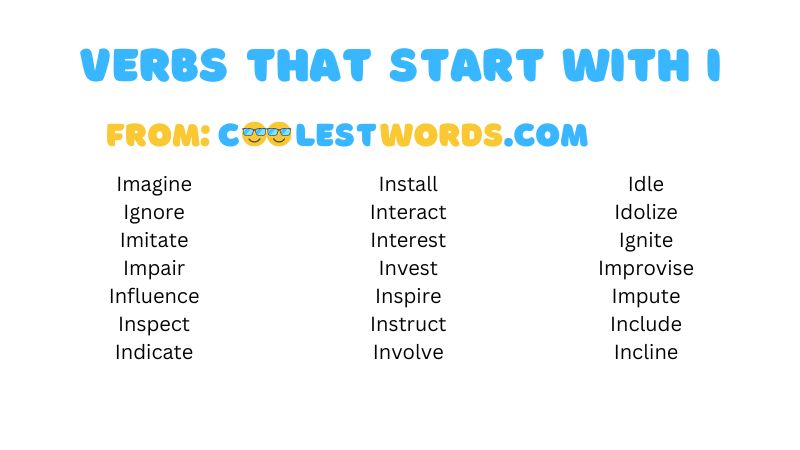 More Verbs That Start With The Letter I