The letter ‘J’ may not be the first one that comes to mind when thinking of commonly used verbs, but it does have its fair share of interesting and diverse options.

Whether it’s the physical movement of jogging or the mental action of judging, verbs starting with the letter ‘J’ play a crucial role in expressing ourselves and understanding the world around us.

Verbs That Start With The Letter J

The verb “join” means to connect or unite two or more things together.

It generally means becoming a member of a group, organization, or club.

“He joined the two pieces of wood together with a screwdriver.”

“She joined the company as a new employee.”

“They joined the protest march in the city center.”

It also means participating in an activity or an event.

“She joined the dance class”

“They joined the conversation”

It often refers to the act of coming or bringing together or becoming associated.

“The two rivers joined to form a larger one”

“The different groups joined to form a movement”

The verb “jumble” means to mix or confuse things in an unordered or random way. It can be used to describe physical objects, such as words or letters, or abstract concepts, such as thoughts or ideas.

“The child jumbled the pieces of the puzzle, making it difficult to complete.”

“The news report jumbled the facts, making it hard to understand what had happened.”

“He jumbled his words as he spoke, making it hard for people to follow along.”

“She jumbled her thoughts as she tried to explain the situation.”

In most cases, it is used to indicate disorder or confusion.

The verb “jump” refers to the physical action of propelling oneself upward or forward using the legs and feet.

It has several meanings, depending on the context in which it is used.

Physical movement: “The children jumped on the trampoline for hours.”

Change in value or level: “The stock market jumped by 50 points today.”

Startle or surprise “He jumped when he heard a loud noise.”

Skip or bypass: “He jumped a step in the instructions and got confused.”

Leaping or bounding “The kangaroo can jump over 20 feet.”

The verb “judge” means to form an opinion or make a decision about something based on evidence or criteria.

It can be used in a variety of contexts, such as legal proceedings, competitions, or personal evaluations.

“The judge ruled that the defendant was guilty.”

“The judges awarded first place to the gymnast.”

“He judged the book by its cover and didn’t read it.”

To jiggle means to move or shake slightly and quickly, often in a playful or lively manner.

Additionally, it means adjusting or fiddling with something, such as a knob or button, to make it work properly.

The verb “joke” refers to the act of saying or doing something to provoke laughter or amusement.

“He joked about his bad haircut to lighten the mood.”

“She joked that she was going to quit her job and become a clown.”

“They joked around with each other while they waited for their food.”

It often means to deceive or trick someone playfully.

“He joked her into thinking that he was going to propose.”

“She joked that she was pregnant to see their reaction.”

The verb “jibe” means to be in agreement or harmony with something.

The meaning of this verb also refers to something consistent or compatible with something else.

“His statement jibed with the evidence presented in court.”

“The company’s policies jibe with the industry standards.”

“The new design jibes with the company’s brand identity.”

Additionally, it is connected to sailing terms, in which “jibe” means to change direction by turning the stern of the boat through the wind so that the wind hits the other side of the sails.

“He jibed the sailboat to change direction.”

“The wind was strong, so they jibed the sail to avoid capsizing.”

The verb “jostle” means to push or elbow one’s way roughly or impatiently, as in a crowd or line.

“He jostled his way through the crowded street.”

“She jostled the other shoppers in her eagerness to get to the front of the line.”

“The wind jostled the branches of the tree.”

It can also refer to a minor or insignificant physical contact or push, that doesn’t cause any harm.

“They jostled each other playfully as they walked down the street.”

The verb “jigsaw” can mean to cut or divide something into jigsaw shapes or pieces, often with a saw that has a thin, narrow blade and fine teeth.

For example, “He jigsawed the wood into small pieces for his puzzle.”

It is also referring to solving a puzzle made up of small irregularly cut pieces that have to be fitted together to make a picture.

For example, “She jigsawed the puzzle for hours until it was complete.”

The verb “jar” can have several meanings depending on the context in which it is used.

To shock or surprise: “The news of his sudden death jarred the community.”

To clash or be in conflict: “The bright colors of the painting jarred with the muted tones of the room.”

To physically shake or vibrate: “The earthquake jarred the building.”

To pack in a jar: “She jars the tomatoes for the winter.”

The verb “jangle” refers to the act of making a harsh, discordant, or metallic sound.

We can use it to describe the sound of various objects such as keys, bells, or jewelry.

“The keys jangled in his pocket as he walked.”

“The wind chime jangled in the breeze.”

“Her bracelets jangled as she gestured.”

“Justify” is a verb that means to provide a reason or explanation for something, or to prove that something is right or reasonable.

It also refers to aligning text or other content on a page so that the left and right edges are even.

For example: “I will try to justify my actions to the board.”

The verb “jeopardize” means to put something in a dangerous or uncertain position, to put it at risk, or to endanger it.

It means putting something valuable or important at risk of being lost or harmed.

For example: “His reckless behavior jeopardized the entire project.”

“His actions jeopardize his job and reputation.”

“Jet” is a verb that typically means to travel by jet aircraft, or to move quickly through the air or water.

For example: “I’m going to jet off to Paris this weekend.”

It can also mean to emit a substance from a nozzle with force, like “the volcano jetted lava”.

It is often used in some specific idiomatic expressions such as: “She jetted out of the room”

The verb “jingle” means to make a light, ringing sound, as of small bells or coins.

“The keys in her pocket jingled as she walked down the street.”

It’s used in the context of Christmas time, where the sound of jingling bell refers to the sound of Santa Claus’s sleigh, or the sound of the bell on a horse-drawn sleigh.

The verb “jumble” means to mix or confuse things so that they are no longer in the correct order or arrangement.

It also means putting it together haphazardly or randomly.

“The wind jumbled the papers on the desk.”

“He jumbled the letters on the Scrabble board, making it difficult for his opponent to find words.”

“She jumbled the ingredients together in a bowl before baking the cake.” 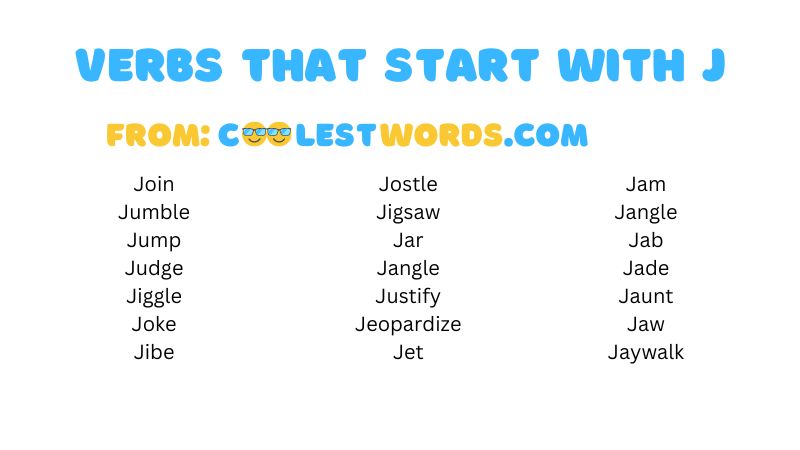 More Verbs That Start With J