Verbs that start with “K” can be used to express a wide range of actions and ideas.

They are important in the English language and help to make our communication more expressive and specific.

The Most Common Verbs That Start With The letter K

“Knock” is a verb that refers to the action of striking a surface with a fist or an object to make a noise.

This noise is used as a way to get someone’s attention or to signal that someone is at the door or entrance of a building.

“She knocked on the door to get her friend’s attention.”

“He knocked on the wall to alert his neighbor that he was home.”

In addition to the physical act of knocking, the verb can also be used in a figurative sense, such as in the phrase “to knock someone’s socks off” meaning to impress or amaze someone.

Example: “His performance knocked our socks off.”

It can also be used in a negative sense such as in “to knock someone down” which means to physically or emotionally overpower or defeat someone.

“The punch knocked him down.”

The verb “kiss” refers to the act of pressing one’s lips against the lips or other body parts of another person  as a sign of affection or romantic interest.

“He leaned in and kissed her on the cheek.”

“They shared a passionate kiss before saying goodbye.”

The verb “kiss” can also be used in a more casual or friendly way, such as to show appreciation or congratulations.

“She kissed her son on the forehead after he graduated.”

“He gave her a kiss on the hand as a sign of respect.”

In some cultures, a kiss on the cheek is also a common way of greeting someone or saying goodbye.

It can also be used in a metaphorical sense, such as “to kiss something goodbye” meaning to let go of something or to give up on it.

“He knew he had to kiss his old life goodbye to start fresh.”

The verb “kick”refers to the action of forcefully striking something, typically with the foot.

It is often associated with activities such as soccer, football, and martial arts, but can also refer to other actions such as kicking a rock or kicking a habit.

“He kicked the ball into the goal, scoring the winning point.”

“She kicked the door open with her foot.”

“He was trying to kick his smoking habit.”

This verb can also be used in a more physical sense, such as in a fight or self-defense.

“He kicked his attacker in the stomach.”

“She learned how to kick in a self-defense class.”

The verb”kick” can also be used to describe the physical sensation or movement of the foot or leg, such as in the phrase “to kick back” meaning to relax or recline.

“After a long day, he kicked back on the couch and watched TV.”

To knit is a verb that refers to the action of creating a fabric by interlocking loops of yarn or thread using knitting needles.

This process is often used to make clothing, accessories, and household items such as blankets, scarves, and socks.

“She knit a scarf for her husband to keep him warm during the winter.”

“He learned how to knit as a way to relax after work.”

“They knit a baby blanket together as a gift for their new niece.”

The process of knitting involves using two or more knitting needles to create loops of yarn, which are then interlocked to create a fabric.

Knitting is a popular hobby and has been for centuries, it’s a way to create beautiful and useful items and can be relaxing and meditative.

It’s also a way to express creativity and produce something tangible from a skein of yarn.

The verb “know” is used to expresses awareness and understanding of information in many different contexts and situations and is essential for communication and learning.

It is a verb that refers to the action of having information or understanding about something.

It is often used to express knowledge or familiarity with a fact, person, or thing.

“I know the answer to the question.”

“He knows how to fix the car.”

“She knows the names of all the plants in her garden.”

It can also be used to indicate that someone is aware of something or has experienced it.

“He knows what it’s like to be in a difficult situation.”

It can also be used in the phrase “to get to know” which means to become familiar or become friends with someone.

To keep is a verb that refers to the action of holding on to or retaining possession of something.

It is often used to express the idea of maintaining or preserving something, such as an object, information, or state.

“I will keep the book safe.”

“He keeps a journal to record his thoughts.”

“She keeps her promises.”

It can also be used in the context of time, such as keeping a schedule or a routine.

“I will keep the appointment at 2 PM.”

“He keeps a strict exercise regimen.”

Additionally, we use it in the sense of maintaining something in a certain condition, such as keeping a house clean or keeping a car in good working order.

She keeps her house immaculate.”

“He keeps his car in pristine condition.”

The verb” keep” is often  used in the context of security, such as keeping a secret or keeping someone safe.

“We must keep this information confidential.”

To knot is a verb that refers to the action of fastening or tying something together using a knot.

Knots are used to secure or bind a rope, cord, or string, and can be used in various settings such as boating, fishing, climbing, and crafting.

“He knotted the rope to secure the boat to the dock.”

“She knotted the thread before starting to sew.”

“He knotted his tie before his presentation.”

It can also be used in the context of hair styling, “to knot a hair” by twisting and pulling a section of hair to create a bun or ponytail.

“She knotted her hair before going to bed.”

The verb can also be used in the context of mathematics, in knot theory, a branch of mathematics that studies knots and links of knots, “to knot” means to create a closed loop without any crossings.

“He was studying how to knot different types of knots in knot theory.”

To kneel is a verb that refers to the action of bending the legs and lowering the body so that one or both knees are touching the ground.

It is often used as a sign of respect, humility, or submission.

“He knelt before the king in a sign of respect.”

“She knelt to pray in the church.”

“He knelt to tie his shoelace.”

It is used in the context of sports, such as American football, when the defensive player will kneel down to the ground to indicate that they accept the penalty and the game is over.

“The quarterback knelt down to end the game.”

It can also be used as a sign of protest, such as kneeling during the national anthem.

“He knelt during the national anthem to protest racial injustice.”

Kneeling is a common activity that can be used in many different contexts, it can express respect, submission, humility, or protest.

The act of kneeling can also be used to show respect to a higher power, or as a symbol of protest. 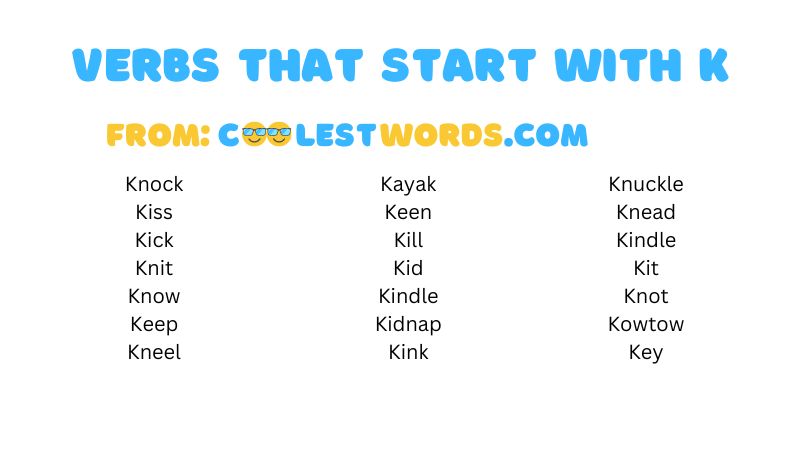 More Verbs That Start With K