Verbs that start with the letter “L” are an important part of the English language.

They express various actions, states, or occurrences and are commonly used in daily conversation.

The Most Common Verbs That Start With The Letter L

To learn is a verb that refers to the action of gaining knowledge, understanding, or skill through study, experience, or instruction.

It is the process of acquiring new information, skills, or understanding about a subject or an activity.

“She learned how to play the piano.”

“He learned about history in school.”

“They learned the importance of teamwork.”

It is also used in the context of self-improvement and personal growth, such as learning a new language or learning to manage stress.

“I am learning Spanish to improve my communication skills.”

“She is learning to manage stress through meditation.”

The verb “learn” is also used in the context of work or job-related learning, such as learning new software or a new process.

“He is learning how to use the new software.”

“She is learning the new process to improve her work efficiency.”

The verb “like” refers to the action of having a positive feeling or affection for something or someone.

It is often used to express enjoyment or preference for a person, thing, or activity.

“She likes to read.”

Today, it is often used in the context of social media, such as “to like” a post or a comment, indicating that you enjoyed or approved of it.

It can also be used in the context of asking for someone’s opinion, such as

“What do you like to do in your free time?”

To like is a simple verb that expresses a person’s preference, affection, or enjoyment for something or someone.

It’s a way to express one’s positive feelings and opinions, it’s widely used in everyday conversations and on social media.

The verb “leave” has several meanings, but generally, it means to go away from a place or situation or to stop being in a particular place or state.

It can also mean abandoning or forsaking something.

Example: “I’m leaving the office now” or “he decided to leave the company after 10 years.”

Additionally, it can also mean to permit or allow something to remain, to put something behind, or to give something to someone else for safekeeping.

Example: “She left her keys on the table” or “He left the book on the shelf”.

To lend means to give something, such as money or an object, to someone for a specific time, with the expectation that it will be returned in the same condition.

It is a transitive verb, so it requires an object, the thing that is being lent.

“She lent her friend her car for the weekend.”

It can also be used in a more general sense, as in “He lent his support to the cause”.

It is the opposite of “borrow”.

The verb “lie” has multiple meanings and uses in the English language.

One of the meanings of “lie” is to recline or rest in a horizontal position.

For example, “He lied on the couch” means that he was resting in a horizontal position on the couch.

Another meaning of “lie” is to make a false statement.

For example, “ He lied to his parent about where he was going” means that he made a false statement to his parents about his whereabouts.

It can also be used as a synonym for “to tell a falsehood” or “to be in a state of not telling the truth.”

For example, “I can’t believe he lied to me” means that the speaker is disappointed that the person was not truthful to him.

The verb “let” is a verb that means to allow or permit something to happen or to be done.

It is often used to give permission or to allow someone to do something or to express the possibility of something happening in the future.

For example: “Let me help you with that” means that the speaker is offering to assist with something.

“Let’s hope for good weather tomorrow” means that the speaker is expressing the possibility of good weather in the future.

It can also be used to express a suggestion or a proposal.

The verb ”love” expresses strong feelings of affection, devotion, or admiration for someone or something.

It is often used to describe romantic feelings, but it can also describe feelings towards family members, friends, or even pets, or objects.

For example, “I love my wife” means that the speaker has strong feelings of affection and devotion for their spouse.

We can use the verb love to describe the action of caring for someone or something.

For example, “I love to cook” means that the speaker enjoys cooking and takes care in preparing meals.

In summary, “love” is a verb that expresses strong feelings of affection, devotion, admiration, and caring for someone or something.

The verb” laugh” means to make the sound or expression of amusement or joy.

“He laughed at the comedian’s joke.

In addition, it can also mean finding something amusing or to treat something with humor.

To lock means to fasten or secure something, such as a door or a container, with a device that can only be opened with a key or combination.

It means to put something in a position where it cannot be moved or to make something secure or inaccessible.

For example: “I locked the door before I left the house.”

This verb can be used in a figurative sense, as in “the memories are locked away in her mind.”

To launch means to set something in motion, to begin or to start.

It can also refer to the act of propelling an object, such as a rocket, into the air or space.

The term can also be used as a verb in the context of software or apps, meaning to release or make it publicly available.

“NASA will launch a new satellite into orbit next month”,

“They launched the mobile app on the App Store”.

To lose means to no longer have possession of something or to be unable to find something.

It refers to failing to win or succeed in something, too.

For example:” I lost my keys and couldn’t find them for hours,” or

“I lost the game and was disappointed.”

The verb “lift” means to raise or move something to a higher position using physical effort.

It can also mean to elevate or raise one’s spirits or to remove something from a lower to a higher place.

For example, “He lifted the weights” or “she lifted her head” or “the news lifted her spirits”

The verb “label” means to attach a tag, name, or other identifying information to something.

We use it to describe or identify something by giving it a name or designation.

“He labeled each box with its contents.”

“She labeled the jars with their expiration dates.”

“The company labeled the product as organic.”

It’s also can be used as a synonym for stigmatize, categorize or judge

“The media labeled him as a criminal”

The verb “levy” means to impose or collect a tax, fee, or fine, typically by a government or other official organization.

It can mean imposing a charge or penalty or imposing some form of restriction or ban.

“The government levied a new tax on gasoline.”

“The judge levied a sentence of five years in prison.”

It can also refer to the act of raising an army, force, or troops to fight in a war.

“The king levied an army to defend the kingdom” 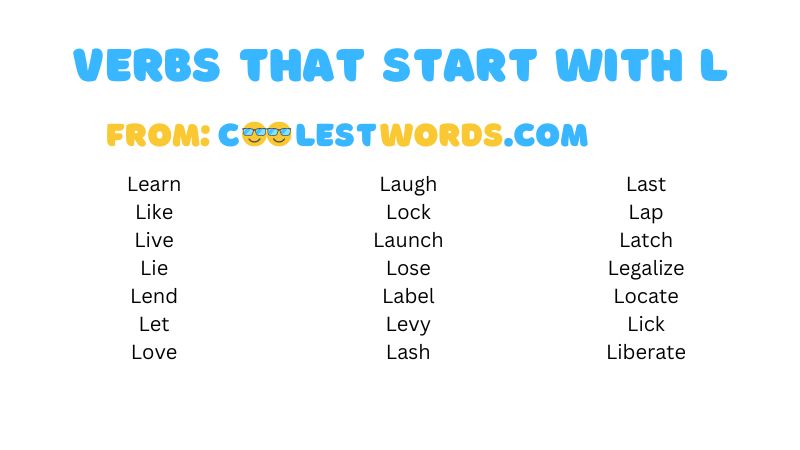 More Verbs That Start With L