Verbs That Start With M

Verbs are the driving force behind our language and the action words that give meaning and purpose to our sentences.

The letter’ M’ is home to a diverse group of verbs, each with its unique definition and usage.

From the simple and fundamental, such as ‘move’ and ‘make,’ to the more specific and nuanced, such as ‘mingle’ and ‘misunderstand,’ the verbs that start with ‘M’ play a vital role in our communication and understanding of the world around us.

The Most Common Verbs That Start With The Letter M

The verb “make” refers to the action of creating or building something with the use of tools or materials.

For example, one can make a cake by combining ingredients and baking them, or one can decide by considering different options and choosing one.

“To make” also indicates a change in state or form, such as making a bed or tidying a room.

Another way “make” can be used is to produce something, such as make money or make progress.

Additionally, “make” can be used as a synonym of “cause” or “force,” as in “make someone do something” or “make something happen.”

“I will make dinner tonight.”

“She is making a quilt for her new baby.”

“We need to make a plan for the weekend.”

“The company is making a new product.”

The verb “to manage” refers to overseeing, controlling, or directing the operation of something or someone.

It also means to handle or deal with something or someone effectively and efficiently.

We can use it in different contexts, such as managing a business, managing a team, or managing one’s own time and resources.

“She manages a large department at the company.”

“He is managing the project with great skill.”

“I have to manage my finances carefully to make ends meet.”

“The team is managing to meet the deadline.”

It can also mean “to succeed in achieving something despite difficulties,” as “I managed to finish the race.”

In addition, it is often used as a synonym for “cope” or “deal with,” as in “I don’t know how to manage this situation.”

The verb “miss” refers to the feeling of regret or longing for the absence of someone or something.

We use it in different situations, such as:

Expressing a feeling of regret or longing for the absence of someone or something,” I miss my family when I am away on a business trip.”

Expressing a failure to hit or reach something,” I missed the target by a few inches.”

Expressing a failure to attend or participate in something, “I’m sorry, I missed the meeting yesterday.”

It can also be used to mean “not realize” or “overlook,” as in “I missed the point of the argument,” or as a synonym for “regret,” as in “I’ll miss the chance if I don’t take it.”

The verb “manipulate” refers to skillfully controlling or influencing something or someone, often deceptively or unfairly.

It implies the use of cunning or deceit to achieve a desired outcome.

“He manipulates the stock market to his advantage.”

“She manipulates her colleagues to get what she wants.”

“The politician is manipulating public opinion.”

More neutrally or technically, such as in photography or graphic design, it refers to adjusting and editing a picture, image, or video to achieve the desired effect.

Manipulation can also be physical, as in manipulating objects, tools, or machines.

When used about people and situations, it can have a negative connotation, implying deceit and unfairness, so it is essential to be mindful of the context when using this verb.

“To match” is a verb that means to find or bring together something that is the same or similar to something else.

In a more general sense, such as “he matched her ambition,” it means he had the same ambition.

It can also mean to coordinate as in fashion, “the dress matches the shoes,” meaning the dress and the shoes look good together.

To measure means to determine the size, amount, or degree of something using a standard unit of measurement. It can be used in a different context, such as :

In physics, chemistry, or engineering, measure refers to determining a numerical value of a physical quantity, such as length, weight, or temperature.

In cooking, measure refers to determining the number of ingredients used in a recipe.

In tailoring or construction, measure refers to determining the size of an object or a space.

For example, “I need to measure the length of this table” means to determine the size of the table using a measuring tape.

“She measured the ingredients for the cake” means she determined the number of ingredients needed for the recipe using measuring cups or spoons.

“To meet” is a verb that means to come into the presence of someone or something. It can be used in a different context.

In social interactions, a meeting refers to coming into the presence of someone for the first time or after a period of separation, and it can be a planned or unplanned event.

In business or professional contexts, meet refers to a scheduled gathering of people to discuss or make decisions about a specific topic or project.

“I have never met anyone as kind and thoughtful as you.”

“I am looking forward to meeting your family during the holiday dinner.”

“The company will be meeting its quarterly sales goals for the first time in three years.”

“The two teams met on the field for the championship game.”

The verb “mingle” means to mix or come into contact with others, typically in a social setting. It can also refer to combining or mixing different elements or substances.

When used in a social context, “mingle” refers to the act of interacting with a group of people at a party, reception, or other social events

For example, one might say, “I mingled with the guests at the party,” meaning that they moved around the room, talked to different people, and made connections.

When used in a more general sense, “mingle” can refer to any situation in which different things are combined or mixed.

For example, one might say, “the colors in this painting are expertly mingled,” meaning that the artist skillfully blended different colors to create a harmonious composition.

In the past, mingling also had a means of moving around or being with people or things in a confused or haphazard way, which is not much used in modern English.

The verb “misunderstand” means failing to understand something correctly or accurately, often due to a lack of information or misinterpreting what was said or done.

It might also refer to a failure to comprehend or misinterpret a situation.

Or one might say, “I misunderstood the situation,” meaning they did not have the correct information or understanding of the events or circumstances.

It is important to note that misunderstandings can happen between people and can cause confusion, frustration, and even conflicts, so it is essential to communicate clearly and effectively to avoid misunderstandings.

The verb “move” means to change position or location by physically relocating or causing something to do so.

It often refers to inspiring or motivating someone to take action.

For example, one might say, “I moved to a new city,” meaning they physically changed their location and now reside in a different city.

In a more general sense, “move” can also mean to make progress, change, or take action, such as “the company is moving forward with its new project,” meaning that the company is actively working on and making progress with the new project.

Additionally, “move” can also be used in certain expressions such as “to move someone” (to influence, motivate or persuade) or “to move something” (to change the location or position of an object). 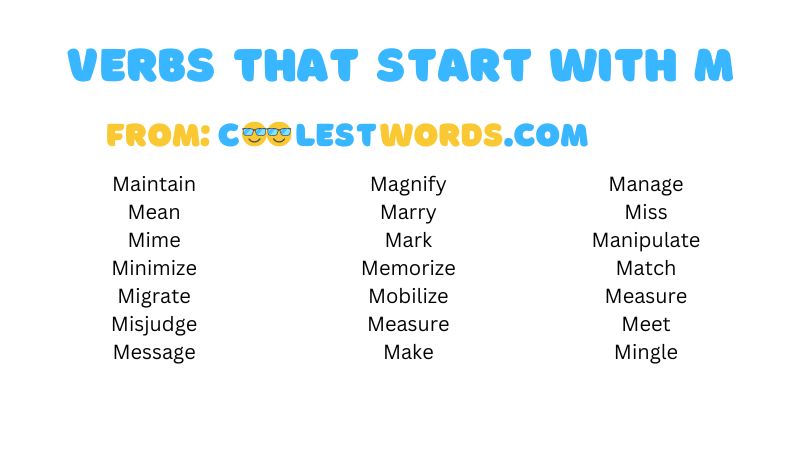 More Verbs That Start With M

Verbs That Start With V