Verbs That Start With N

Navigating the complex world of verbs can be daunting, but understanding the nuances of verbs, starting with ‘n,’ can significantly enhance one’s language skills.

Nurturing a deep understanding of verbs starting with ‘n’ is essential for effectively communicating one’s thoughts and ideas.

The Most Common Verbs That Start With The Letter N

To notice is to become aware of or to pay attention to something.

It is a verb that means to perceive something through one’s senses or to observe something happening.

It can also mean recognizing something as being important or noteworthy.

For example, you might notice a change in the weather, a mistake on a test, or a new haircut on a friend.

To name is to give a specific label or designation to something or someone.

A verb means identifying something or someone by a particular word or set of words.

For example, you might name a new baby, name a newly discovered species of animal, or name a building or street.

“The scientists named the new species of fish after the discoverer.”

“She named her baby girl Charlotte.”

“They named the new building after the founder of the company.”

To need is to have a requirement or a necessity for something.

It is a verb that means to require something to survive, function, or be successful.

For example, you might need food, water, or shelter to survive or a specific tool or skill to complete a task.

It can also refer to a desire or a lack of something. Finally, it can also be used in the sense of being essential or required for something.

“I need a new pair of shoes for work.”

“She needs to study more to pass the exam.”

“They need more time to finish the project.”

“He needs to eat something before he goes to the gym.”

To narrate is to tell a story or to give an account of something that happened.

It is a verb that means to describe or recount an event or series of events in spoken or written form.

For example, one might narrate a personal experience, a historical event, or a fictional story.

The act of narrating is to provide a spoken or written account of something that happened, and it can be done in different forms, such as a first-person or third-person account.

“The author narrates the story from the main character’s perspective.”

“The tour guide narrates the palace’s history as we walk through the rooms.”

“The actor skillfully narrates the audiobook, bringing the characters to life with his voice.”

To navigate means to plan a route and make one’s way through an area, such as a city or wilderness, using landmarks, maps, or other guides.

It can also refer to steering a ship or aircraft on a particular course.

In a more general sense, it can mean finding one’s way through a challenging situation or problem.

“I must navigate the city streets to get to the meeting on time.”

“The captain navigated the ship through a stormy sea to reach port safely.”

“I had to navigate the complex bureaucracy to get the necessary permits for my project.”

“The hikers had to navigate the mountain trail using a map and compass.”

To nominate means formally proposing or selecting a person or group for an office, honor, or award.

It can also refer to the act of putting forward a candidate for a position or role. In a more general sense, it can mean to suggest or recommend something or someone for a particular purpose.

“I nominated my colleague for employee of the month.”

“The president nominated her as a candidate for the Supreme Court.”

“I nominated the company for an industry award.”

To negotiate means to engage in discussions or talks to reach an agreement or compromise.

It often refers to reaching an agreement between two or more parties over a specific issue or course of action, or finding a mutually acceptable solution by discussing and making concessions.

“The two countries are negotiating a peace treaty.”

“The buyer is negotiating the price of the car with the seller.”

“We had to negotiate the loan terms with the bank.”

“I am negotiating with my landlord to lower the rent.”

To normalize means to make something conform to a typical, standard, or expected condition or level.

It can also refer to adjusting or adapting something to make it more typical or average. In a more general sense, it can mean returning something to a state of normality or stability.

It also can be used in terms of relations or interactions between different groups of people.

In such a context, normalizing means establishing a more equal and harmonious relationship between those groups, which may have been marked by discrimination or bias.

“The data needs to be normalized before it can be analyzed.”

“The process of normalizing relations between the two countries has begun.”

“The therapist is helping the patient normalize their behavior.”

“The company is trying to normalize the working conditions for their employees.”

The verb “note” can have several meanings, including:

Write down or record something, such as a fact, observation, or comment.

Example: “I noted the meeting time in my calendar.”

To pay attention to or notice something.

Example: “I couldn’t help but note the strange behavior of the animal.”

To express or indicate a particular feeling or attitude.

Example: “She noted her disappointment with the decision.”

Example: “The teacher noted that the student’s work had improved significantly.”

The verb “number” refers to assigning numbers to something, such as items in a list or pages in a book.

Example: “I need to number the pages of this report.”

It can also refer to determining the total number of something, such as people in a group or items in a collection.

Example: “I will number the attendees at the meeting.”

It could also indicate giving a unique identification number to something, like a product or a document.

Example: “We have to number the new stock of products before they are shipped.”

To nap is a verb that refers to sleeping for a short period, usually during the day.

It is usually considered a short sleep during the daytime, usually in the afternoon.

This is because napping helps to boost your energy and improve your mood.

Also, it can help you to improve your cognitive function and memory.

Example: “I need to nap before I continue working.”

It could also be used in imperative sentences to express a suggestion or a recommendation.

Example: “You should nap for a while. You look tired.”

In addition, it is used to indicate the habit or tendency of someone to nap frequently.

Example: “He is a heavy napper. He needs to nap every day.”

The infinitive form “to neglect” is a verb phrase that refers to the action of not taking proper care of someone or something or not fulfilling one’s responsibilities or duties.

It means to ignore or pay little attention to something or someone.

Example: “I can’t neglect my children’s needs just because I am busy with work.”

It can also express the intention or purpose of not paying attention to something or someone.

Example: “I must not neglect my health even if I have a lot of things to do.”

Neglect can also have a legal meaning, which refers to the failure to provide for the basic needs of a child or a dependent person under one’s care. 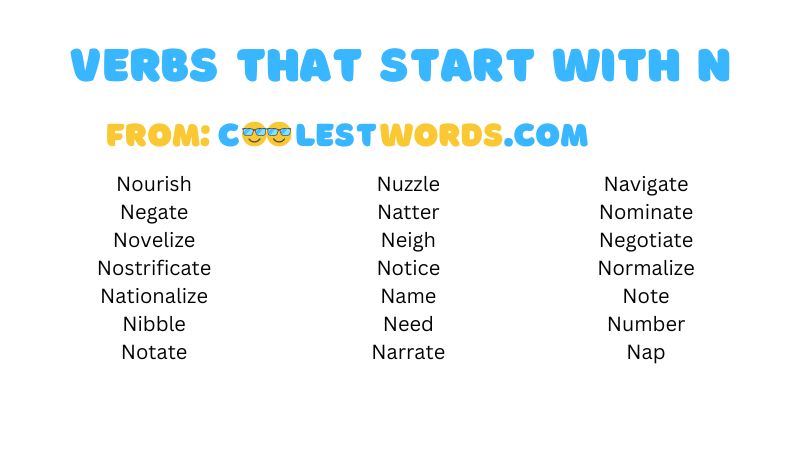 More Verbs That Start With N

Verbs That Start With M