Verbs starting with the letter ‘S’ exhibit the dynamic nature of language and its ability to convey a wide range of actions and emotions.

The letter S is home to a vast array of verbs, each with its unique definition and usage.

The Most Common Verbs That Start With The Letter S

To say means to express or state something in words, either verbally or in writing, to convey information, thoughts, opinions, or feelings.

“He said that he would be late.”

“She said that she loves him.”

We often use it in the imperative form to indicate that the speaker wants the listener to say something, for example, “Say hello to your mother for me.”

To say, in a more formal context, such as in legal proceedings, means to indicate that something has been stated or recorded, for example:

“The witness said that she saw the accident.”

It is often used in an idiomatic expression such as “to say the least,” which means to express something in the most minimal terms.

To see means to use the sense of sight to perceive or observe something.

We use the verb “see” to express that someone is looking at something or that it can be perceived visually.

This verb is commonly used in contexts such as observing the world around us, looking at something through a microscope or telescope, or watching a movie.

“I can see the mountains from my window.”

“He saw a bird flying in the sky.”

To sit means to rest or place oneself in a sitting position.

We usually use it in many contexts, such as sitting on a chair, couch, floor, or bench.

In a more general sense, it refers to something being in a stationary position, such as

“The bird sat on the branch,” or “The statue sits in the park.”

In imperative form, the speaker wants the listener to sit down. For example,

“Sit down and relax.”

In idiomatic expressions, such as “sit tight,” it means to wait calmly and patiently, “sit on the fence,” which means to avoid taking a clear stance on an issue; and “sit idly by,” which means to do nothing while something happens.

To speak means to express oneself using spoken words, communicating through speech, whether in a conversation, a lecture, a presentation, or an address.

It refers to different forms of spoken communication, such as verbal expression, articulation, or vocalization.

The verb “speak” can also be used in idiomatic expressions, such as “speak your mind,” which means to express one’s opinions or thoughts freely, “speak of the devil,” which means to talk about someone who suddenly appears, “speak volumes” which means to convey a lot of information or meaning without using many words.

“She spoke confidently in front of the audience during her presentation.”

“I was just talking about you,” “Really? Speak of the devil.”

To stand means to rise to an upright position on one’s feet.

It can be used in contexts such as standing in a line, standing at attention, or standing on a stage.

In a more general sense, it refers to something being in an upright position, such as

“The statue stands in the park,” or “The tree stands tall in the field.”

We use it in idiomatic expressions, such as “stand one’s ground,” which means to maintain one’s position or beliefs in the face of opposition, “stand out,” which means to be conspicuous or remarkable, “stand tall,” which means to remain dignified or confident under challenging circumstances.

To start means to begin or initiate an action, event, or process.

It implies a change from a state of rest or inaction to a state of activity or motion.

“She started the car and drove away.”

“He started to run and quickly picked up his pace.”

“The concert will start at 8 o’clock.”

We often use the verb “start” in idiomatic expressions such as “to start on the wrong foot,” which means to begin a relationship or situation in the wrong way or “to start from scratch,” meaning to begin something from the very beginning with no prior preparation or advantage.

To stay means to remain in a particular place or position for a while or not to leave or depart.

We use it in different contexts, such as staying at home, in a hotel, or in a relationship.

It implies a continuity of the presence of a state or condition.

“He stayed at the hotel for the night.”

“She stayed home because she was sick.”

“The party stayed lively until the early hours of the morning.”

We use it in idiomatic expressions, such as” stay put,” which means to remain in one place, “stay the course” means to persist in one’s efforts or goals, “stay in touch” means to maintain contact with someone.

Additionally, it is used with an adjective or a participle to form a verb phrase that describes a state or a condition, such as “stay calm,” “stay focused,” and “stay safe.”

To steal means to take something that belongs to someone else without their permission or legal right.

It implies a criminal or unethical act of taking something that does not belong to the person who took it, such as stealing money, a car, or someone’s identity.

He stole money from the cash register.”

“She stole a glance at the clock.”

“The thief stole the painting from the museum.”

However, we can use this verb in idiomatic expressions, such as “steal the show,” which means to be the most impressive or attention-grabbing performer or element in an event, “steal someone’s heart” means to win someone’s affection, and “steal a march” means to gain an advantage over others through stealth or secrecy.

To stop means to bring an action, process, or movement to an end or to come to a halt.

It implies a change from a state of motion or activity to a state of rest or inaction.

“He stopped the car and got out.”

“She stopped talking and listened to the music.”

“I will stop by and see you later.”

The imperative form indicates that the speaker wants the listener to stop doing something, for example, “Stop talking and listening.”

Studying means applying oneself to acquiring knowledge, understanding, or skill through reading, research, observation, or instruction.

This verb is commonly used in contexts such as studying for a test, studying a language, or studying a specific field of research.

It implies a deliberate and concentrated effort to learn or understand something.

“I am going to study for my exam.” means that the person is going to apply themselves to learn and prepare for an upcoming exam.

To survive means to continue to live or exist despite difficult or adverse conditions or to remain alive after a dangerous or life-threatening event.

It implies overcoming or resisting harm, danger, or difficulty.

We use “survive” in many contexts, such as surviving a natural disaster, surviving a disease, or surviving a traumatic experience.

“She survived the car accident.”

“He survived the ordeal in the wilderness. ”

“The plant survived the winter.”

We commonly use this verb in idiomatic expressions such as “to fight to survive,” which means to struggle to remain alive, or “to survive by the skin of one’s teeth,” which means barely surviving. 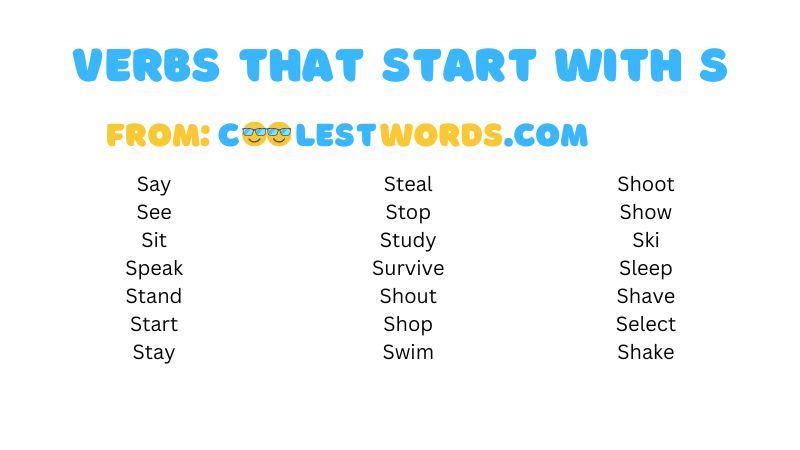 More Verbs That Start With S

Verbs That Start With T