Verbs That Start With T

With their versatility and breadth of meaning, verbs that start with the letter T are essential building blocks of any language.

Whether you are a native speaker or a learner, understanding the uses and forms of these verbs can help you communicate more effectively.

The Most Common Verbs That Start With The Letter T

“Talk” is a verb that means to exchange thoughts, information, or opinions through spoken words.

It means to converse, to have a discussion or chat with someone, or to give a speech or a lecture.

“She talks to her friends on the phone every day.”

“He talked with the teacher about his grades.”

To think means to use one’s mind to consider something, form an opinion, or reflect on something.

It is often used in the idiomatic phrase “to think something over” which means to consider something carefully before making a decision.

The verb “think” can be used in many different contexts and situations.

We also use it to express beliefs or opinions, to plan for the future or reflect on the past, to make decisions, and solve problems.

It is an important cognitive process that allows us to understand and make sense of the world around us.

“I don’t think that’s a good idea.” (Expressing a belief or opinion)

I am thinking of ways to improve our sales.” (considering options)

I will think it over before giving you my final answer.” (considering something before making a decision)

I have thought about this problem for a long time and I still don’t have a solution.” (reflecting on the past)

“Tell” is a verb that means to convey information, news, or a story to someone.

It also means to give instructions or directions or to reveal or make known something.

“I’ll tell you the truth.”(relaying information)

“She’s telling a story to the group.” (sharing information)

“He told me about his new job.” (sharing news)

“Can you tell me how to get to the station?” (Asking for information or guidance)

“To teach” means to provide instruction or to impart knowledge on a subject or skill to a student or learner, giving someone the information and skills they need to learn something new.

It might also mean to show or demonstrate how to do something.

“She teaches math at a local high school.”

“He taught me how to swim.”

To take means to grasp, pick up, or hold something with one’s hand or hands, to remove, or extract something from a place or situation.

It also means to capture or seize something or someone.

Additionally, the verb “take” might mean to ingest something, such as food or medicine, or to travel or move in a particular direction.

“She took the book from the shelf.”

“He took the money from his pocket.”

“They took the city after a long siege.”

“Throw” is a verb that means to propel an object through the air using a quick motion of the arm and hand, to launch or hurl something, to toss or fling something, or to cast something away.

This verb also means to cause something to be in a particular state or condition abruptly.

“She threw the ball to her friend.”

“He threw the trash in the bin.”

“The company threw him out of the job.”

We also use this verb to express something that affects us emotionally or has an impact on someone.

“She touched the wall to check its temperature.”

“He touched the wound to see if it’s still bleeding.”

“His words touched her heart.”

Travel is the verb that means moving from one place to another, typically using transportation such as a car, train, or plane.

This verb refers to the experience of going on a trip or journey, which can include sightseeing, exploring new places, and experiencing different cultures.

“She travels to Europe every summer.”

“He’s traveling for work this week.”

“They are planning to travel around the world next year.”

“To taste” is a phrase that is used to describe the act of sampling or trying a small amount of food or drink to determine its flavor or quality.

The phrase might also mean to describe the act of adding a small amount of an ingredient to a recipe to enhance the flavor.

Another example is “Can I have a taste of your drink?” meaning “Can I try a small amount of your drink to determine its flavor?”

Additionally, it can also be used in the context of cooking or a recipe, where it indicates that the cook should add ingredients according to their preference and taste.

The verb “try” means to make an effort or an attempt to do something.

Also, it can mean to test or to experiment with something, or to put something to the test.

This verb might mean, not only to taste or sample something to test its quality but to assess whether one likes it.

“She tried to lift the heavy weight.”

“He tried to fix the broken vase”

“She is trying a new recipe for dinner.”

“To tie” is an action verb that means to fasten, secure, or connect something using a rope, cord, string, or knot.

It can also mean making the score equal in a game or competition or making someone feel obligated or committed to something.

“She tied her shoes before going for a run.”

“He tied the boat to the dock.”

“He tied himself to the project for the next two years.”

“She tied her hair in a ponytail.”

“To tease” is a verb that refers to the act of making playful or lighthearted mockeries or jokes at someone’s expense, often in a good-natured way, or tormenting someone with persistent annoyances.

“He likes to tease his little sister” means that he likes to make playful jokes at his sister’s expense.

It might also have negative connotations like “The bullies teased him for his weight” meaning that the bullies made fun of him because of his weight in a cruel way.

“To text” is a verb that refers to the act of sending a message through a text messaging service on a phone or computer.

It is an electronic way of communication that has become quite popular in recent years.

This verb is often used in the context of mobile phones or smartphones, but it can also refer to sending messages through other forms of electronic communication, such as instant messaging or email.

“I am going to text my friend to ask if they want to meet later.”

The verb “type” refers to the act of writing or inputting text using a keyboard or other input device.

It is the most common method of inputting text into a computer, smartphone, or other electronic devices.

In the context of grammar, “type” is a verb that means to classify or identify something according to its characteristics or features.

It is also used as a metaphor, meaning to classify or identify something, such as “I can’t type people into groups.”

“I am typing a report for work”

As a verb, “to tend” means to take care of, look after or manage something or someone.

It can also mean to pay attention to or to be inclined towards something or someone, to move or direct oneself in a particular direction or towards a particular purpose.

The verb tend implies an ongoing or regular action, it is used to describe actions that are done regularly.

For example, someone might say “I tend to the garden every morning” or “I tend to my sick mother.” 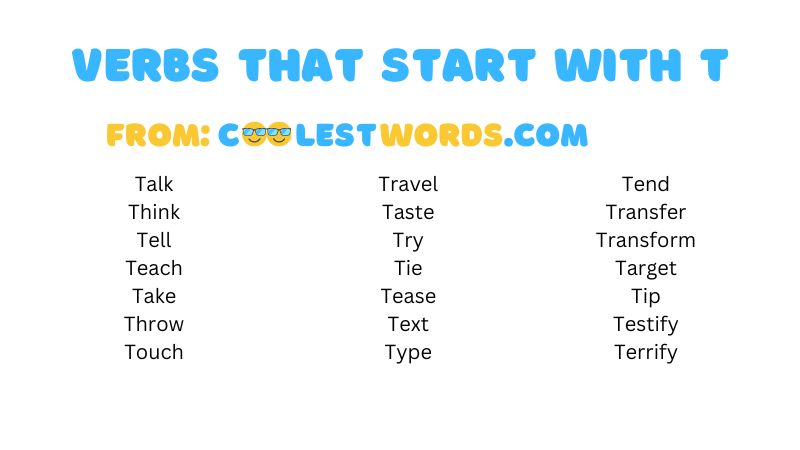 Verbs That Start With Y