Verbs often indicate the time and manner in which the action or state occurs.

Using verbs properly is essential for clear and effective communication, as incorrect verb usage can cause confusion or change the meaning of a sentence.

The Most Common Verbs That Start With The letter U

The verb “use” generally means to employ something for a specific purpose or in a particular way.

“I use this pen to write”

“I use my phone to make calls.”

Additionally, “use” can mean exploiting or taking advantage of something for one’s benefit.

To understand means to have a clear or complete comprehension or knowledge of something.

It implies the ability to grasp the meaning, significance, or implications of something, either through direct experience or through learning or instruction.

For example, you can understand a concept, a language, a person’s feelings, or a situation.

“I hope you understand the importance of this decision.”

“He didn’t seem to understand the gravity of the situation.”

“I have a hard time understanding why he made that choice.”

To update means to make something current or more up-to-date by adding new information or making changes.

It is common in technology, news, and business, where new information or developments are constantly emerging.

We often use it in personal contexts such as updating a resume, an address book, or an inventory.

“I need to update my software to the latest version.”

“Can you update me on the progress of the project?”

“We should update our inventory before we order more supplies.”

“The company is updating its security policies.”

To undertake means to begin or take on a task, project, or responsibility.

It implies a commitment to seeing something through to completion and often carries a sense of responsibility or obligation.

Commonly, we use this verb to describe a significant task, such as undertaking a research project, an adventure, or a journey.

It also means accepting or assuming a role or position, such as undertaking the role of a leader or manager.

When used in formal or professional contexts, such as business or government, it indicates a serious commitment to a course of action.

“The company has undertaken a major restructuring effort.”

“I undertake to complete the project by the deadline.”

“The government has undertaken to improve education in the country.”

“We will undertake a review of our current policies.”

To unlock means to open or release something that is locked or secured.

It usually means opening a physical lock, such as a door or a safe, using a key or a code, or releasing something figuratively locked or secured, such as unlocking the secrets of a mystery or unlocking the potential of a person.

It is often used in the context of security and access, such as unlocking a car, phone, or computer system.

“She unlocked the door with her key.”

“He unlocked his phone with a fingerprint scanner.”

“The game’s final level can only be unlocked by completing all previous levels.”

“The software update will unlock new features for the device.”

“She unlocked the secret compartment in the desk.”

To upset means to disrupt or disturb the usual or expected state of something or someone, causing emotional distress or turmoil, such as upsetting someone by giving them the bad news.

“He was visibly upset when he left the meeting.”

“The team’s loss upset the fans.”

“The delay in the project’s completion has upset the company’s management.”

“The unexpected delay in the flight has upset the passengers.”

Also, it is used to express dissatisfaction or disappointment, such as “I’m upset that my plans have been canceled.”

To utilize means to put something to use or make practical use of something.

It implies making the best use of something, making it serve a purpose or achieve a goal.

For example, “We need to utilize our resources more effectively.”

It describes using something new or different, such as “The company is looking to utilize new technology in their production process.”

It is a more formal or professional word than “use” and is often used in business or technical contexts.

Uploading is an everyday activity in today’s digital world.

It enables users to share and access their files and data from anywhere and is often used in sharing, storing, or saving files online.

“She uploaded her resume to the job application website.”

“They uploaded the new software to the company’s servers.”

“He uploaded the pictures from his camera to his computer.”

It is also used in a broader sense to refer to the act of adding or transmitting any information, such as uploading data to a database, uploading a new software version, or uploading new content to a website.

To undercut means to sell or offer something at a lower price than someone else to get business or gain an advantage.

It is often used in business and commerce, such as a company undercuts its competition by offering lower prices on its products or services.

“She undercut her offer during the negotiations.”

“The store’s sale undercut the prices of other retailers.”

“He undercut his opponents by offering a more attractive package.”

“The new product undercut the sales of the older one.”

To underline means to mark or draw a line under a word or phrase, often to indicate emphasis or importance.

It is commonly used in writing and editing, such as underlining a book’s title or a critical point in a document.

It is also used in graphic design, typography, and web design to indicate a link or a button that can be clicked.

“The report underlines the need for further research on the topic.”

“She underlined the instructions for the recipe.”

“He underlined the quote in the book to remember it.”

“Undermine” is a verb that means to weaken, subvert, or weaken the effectiveness, stability, or confidence in something or someone.

It often implies using subtle or devious means to achieve this goal, such as undermining a leader’s authority or an opponent’s confidence.

We use it to describe a physical action, such as undermining the foundation of a building, a river bank, or a slope’s stability.

“The new policy is undermining the efforts of the department.”

“He undermined her confidence by making negative comments.”

“The scandal has undermined the company’s reputation.” 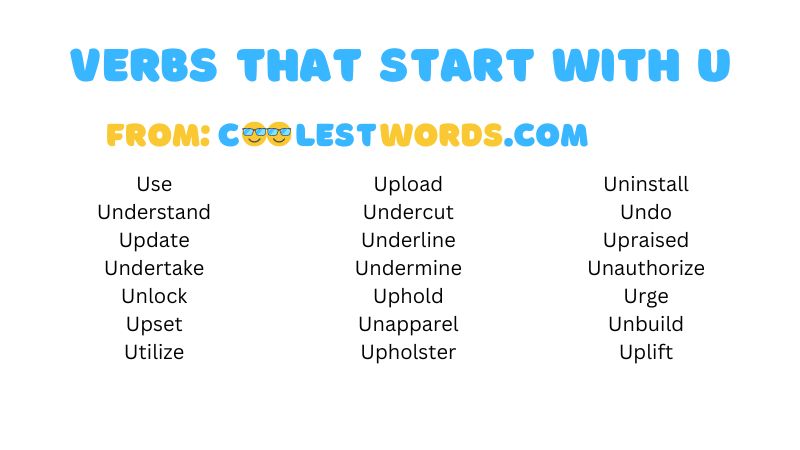 More Verbs That Start With U