Verbs That Start With V

The English language is home to many verbs, and many begin with the letter’ V.’

These are essential for effective communication and convey many actions and emotions.

This article will delve into the rich and diverse world of ‘V’ verbs, examining their meanings, uses, and examples of usage.

The Most Common Verbs That Start With The Letter V

The verb “verify” means to confirm or establish the truth or accuracy of something by providing evidence or proof and checking or testing the accuracy or authenticity of something.

For example, one might verify a person’s identity by asking for their passport or driver’s license or verify the results of an experiment by repeating it multiple times.

In a broader sense, it establishes the validity of a statement or a claim.

“They verified the authenticity of the painting before purchasing it.”

“He verified the information provided by the customer.”

“She verified the results of the experiment by repeating it.”

The verb “visit” means to go to and spend time with someone or at a place, usually for a brief period.

The term “visit” is used when someone goes to someone’s home, office, or elsewhere to meet or spend time with them.

For example, one might visit a friend, family member, or colleague or visit a city, tourist attraction, or historical site.

We also use it in the context of professional meetings or inspections.

“They are visiting the national park on their vacation.”

“He is visiting the company’s headquarters for a meeting.”

“She is visiting the local library to do research.”

“They are visiting the theme park for the day.”

The verb “vaccinate” means to give a vaccine to a person or animal to protect them from a specific disease.

Vaccination introduces a small, harmless part of a disease-causing organism (such as a virus or bacteria) into the body, which then causes the immune system to produce antibodies that can recognize and fight the disease.

Vaccines are usually given as injections but can also be administered orally or by nasal spray.

Vaccination is one of the most effective ways to prevent the spread of infectious diseases and is widely used in public health programs worldwide. It is used for both humans and animals.

“She is vaccinating her children against measles.”

“They are vaccinating the entire community against COVID-19.”

“They vaccinate the animals at the zoo to protect them from diseases.”

The verb “value” means to hold something in high regard and consider it necessary or worthwhile.

It also means assigning a monetary or numerical worth to something.

For example, one could say, “I value my family above all else,” which means that the person holds their family in high esteem.

Another example would be “This painting is valued at $1 million,” which means that the painting has been assigned a monetary worth of $1 million.

In some contexts, it also means estimating or measuring the worth of something.

The verb “vote” refers to expressing a choice or preference, usually in an election or other formal decision-making process.

When you vote, you are choosing between different options or candidates.

The choice you make is recorded and counted along with the options of other voters to determine the outcome of the election or decision.

In a democracy, voting is essential for citizens to participate in the political process and have a say in the decisions that affect their lives.

“I’m going to vote for the candidate I think best represents our community.”

“The employees voted to unionize.”

“We voted on a new company policy at the meeting.”

“The students voted for the class president.”

The verb “voice” has a few different meanings depending on the context in which it is used.

To express an opinion or view: “He voiced his concerns about the project at the meeting.”

To give utterance or expression to something: “She voiced her support for the proposal.”

To produce sounds with the vocal cords: “He voiced his admiration with a loud shout.”

To provide the spoken part for a character in an animation or video game: “She voiced the character of the villain in the animated movie.”

To put into words or express thoughts or feelings: “He voiced his gratitude for the help he received.”

To voice something is to express it in words or sounds. It can be an opinion, a support, a feeling, a character in an animation or video game, or other thoughts or feelings.

To visualize means to create a mental image or representation of something in your mind.

It can also refer to creating a visual representation of something using tools such as drawings, diagrams, charts, or other forms of visual media.

Visualization is used in various contexts, such as problem-solving, goal-setting, and creative thinking.

For example, you can visualize a new room design before starting the renovation.

In addition, you can visualize your future self being successful in your career, the solution for a complex math problem, a new product before creating it, or a scene in a movie before filming it.

“He visualized the new garden layout before starting to plant.”

“She visualized herself crossing the finish line before the marathon.”

Visualization can be a powerful tool for achieving goals, as it can help to clarify your ideas and make them more concrete.

In addition, it can help you to overcome obstacles and achieve your objectives.

The verb “view” means to look at, examine, or observe something.

It often refers to watching or seeing something or the ability or opportunity to look at something.

In addition, the verb “view” can also be used in a more figurative sense, such as “viewing a situation from a different perspective” or “viewing someone or something in a particular light,” which means to see or interpret them in a certain way.

In summary, the verb “view” refers to looking at or examining something.

The verb “vibrate” refers to the rapid to-and-fro or back-and-forth movement of an object or substance caused by the oscillation of its particles.

It can also refer to the sensation of such movement or its sound.

Examples of using the verb “vibrate”:

“The bridge was vibrating due to the heavy traffic.”

“The phone was vibrating because I had a new message.”

“The guitar string was vibrating as he played the chord.”

As you can see, the verb “vibrate” can refer to the physical movement of an object or substance, the sensation of that movement, or the sound produced by it.

It also refers to the vibrations caused by external factors such as traffic, construction, or natural events such as earthquakes.

The verb can be used figuratively, as in the last example, to express a strong feeling.

The verb “venture” means to undertake a risky or uncertain action or business or to go somewhere or do something that involves danger or the possibility of failure.

It can mean trying something new or unfamiliar.

“He ventured into the unknown territory to find a new trade route.”

“She ventured out of her comfort zone to try a new hobby.”

“They ventured into the forest to find the lost hikers.”

“They ventured to cross the border despite the warnings.”

As you can see, the verb “venture” implies some level of risk, uncertainty, or danger, but it also means the willingness to take a chance and the opportunity to gain something. 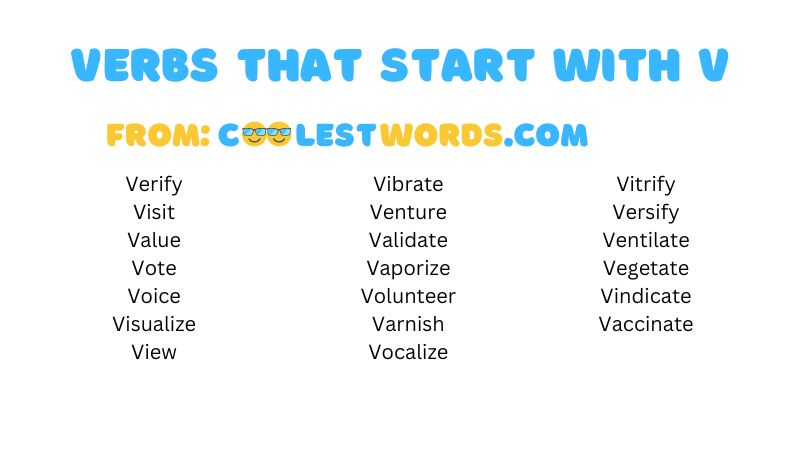 More Verbs That Start With V